After two losses, men’s soccer bounces back with 2-1 win over Cal State Fullerton 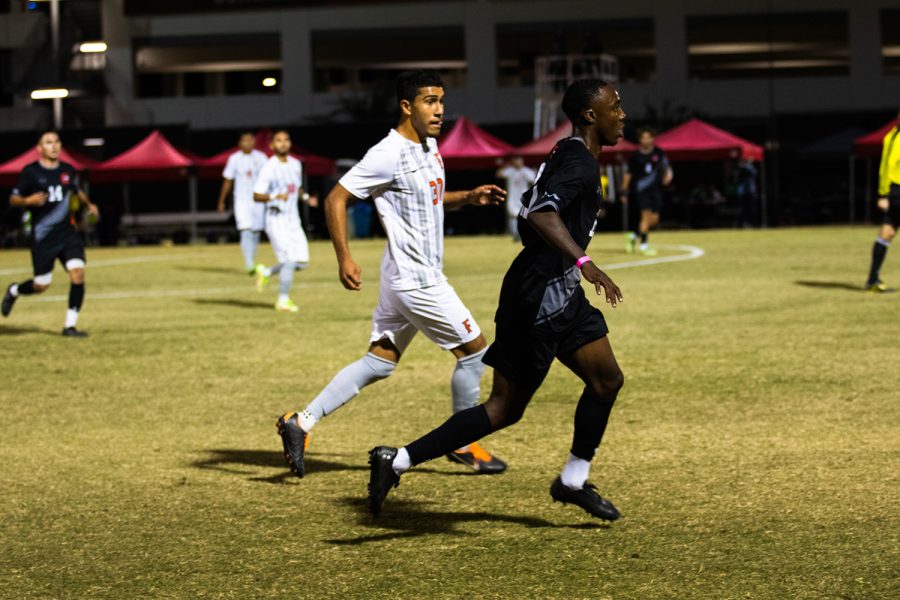 Jamar Ricketts, right, sprints after the ball during the game against California State University, Fullerton in Northridge, Calif. on Wednesday, Oct. 20, 2021.

The Matadors pressed early on into the match to convert two consecutive goals, each six minutes apart, in the first half. Throughout the match, CSUN’s high press found CSUF’s weakness on the left and were quick on the counter, giving the Titans no room to breathe at times.

The referee awarded a controversial penalty to CSUF during a Titans corner in the 20th minute. Midfielder Sebastian Cruz converted the penalty to give the Titans their only goal of the night.

There was a new goalkeeper between CSUN’s goalposts after regular season starter David Preys picked up an injury in the previous match against UC Davis.

Making his Big West debut, freshman goalkeeper Cooper Wenzel had a busy night coming up with three superb saves from the Titans’ 19 shot attempts at goal.

CSUN freshman goalkeeper Cooper Wenzel on his official debut for the Matadors in their 2-1 win over Cal State Fullerton ??@DailySundial @Sundial_Sports pic.twitter.com/z0SSR0bVW7

CSUN attacked in a wide 4-2-3-1 formation. This system positioned the Matadors with four defenders, two holding midfielders in front of the centerbacks, two wide players on the wing, an attacking midfielder behind the forward and a lone striker on top.

In the sixth minute, Ricketts entered the Titans’ box on the left and released a low cross into the penalty area as he was being pulled by a CSUF defender.

Ricketts’ low cross found Jordan Isibor, who then flicked the ball high near Titans goalkeeper Andrea Bonavia’s left post. Bonavia was unable to react as he saw the ball looping into the net.

CSUN forward Jordan Isibor on his goal & on Matador’s approach to the game against CSUF ???? @DailySundial @Sundial_Sports pic.twitter.com/tBSrEHyKwB

On the left wing, Ricketts provided CSUN with pace and agility, giving CSUF players a hard time trying to defend him.

CSUN’s high press inside Titans’ territory paid off in the 12th minute when midfielder John Andersen, who was positioned at right-back, won the ball and passed toward midfielder Arturo Reveles who then released a shot toward the CSUF goalkeeper’s left post.

The shot was deflected away toward the right of the Titans’ penalty box as Ricketts raced to convert the loose ball into the net to give Matadors a comfortable 2-0 lead.

Ricketts recorded four shots attempts at goal with three going on target. The forward now has two goals and two assists under his belt this season.

CSUN leapfrogged CSUF in the Big West standings and are now 2-4-1 in conference play (3-12-1 overall).

With two regular season matches left after tonight’s win, there is much work to do if CSUN hopes to reach the Big West tournament.

CSUN travels to University of California, Irvine on Sunday. Kickoff is scheduled for 7 p.m.