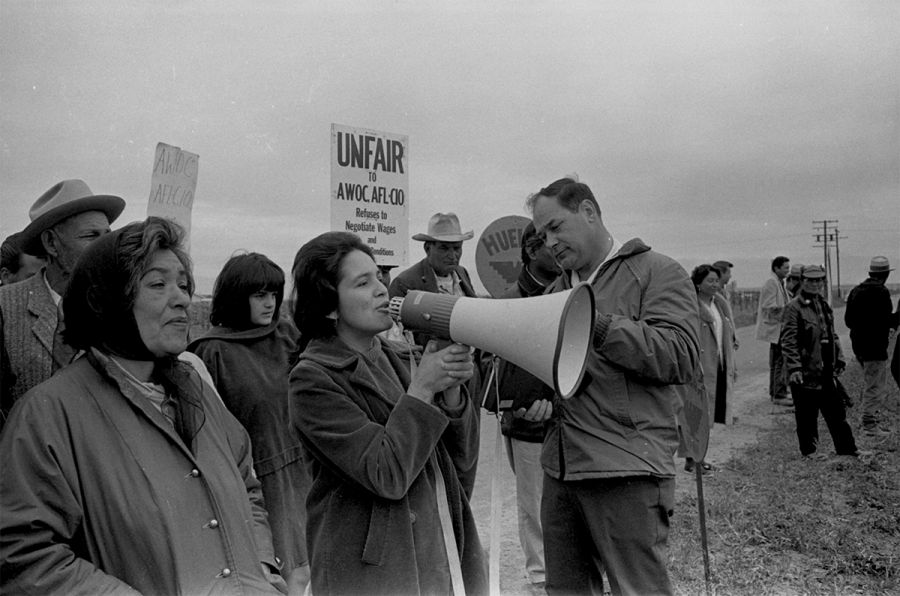 Farmworker Carolina Franco in Modesto during the first pilgrimage to Sacramento, 1966.

The National Endowment for the Humanities granted the Tom & Ethel Bradley Center $350,000 to digitize 22,000 photographs of its Farmworker Movement Collection. The digitization project highlights the stories of individuals who participated in the movement during the 1960s and 1970s.

“We hope to highlight stories of people who are on the margins,” said Guillermo Marquez, a third-year CSUN graduate student who works at the center. “People who weren’t necessarily Cesar Chavez or Dolores Huerta. Perhaps other leaders, and historically marginalized communities.”

According to Equal Justice Initiative, most of the physically demanding, low-paying agricultural jobs in California during the 19th century were filled by Chinese, Japanese, Filipino and Mexican workers. Through the Bracero Program, many Mexicans were brought to the U.S. in an effort to lower wages, cease strikes, and prevent unions from organizing.

As the son of migrant workers and as a migrant worker himself, Cesar Chavez founded the National Farmworkers Association in 1962. Later, with the help of Dolores Huerta, he created the United Farm Workers. The movement aimed to gain workers’ rights such as the right to organize, the right to better pay, and the right to have safer working conditions, according to the Equal Justice Initiative.

In addition to highlighting the participants of the movement, the project hopes to present the work of two photographers, John Kouns and Emmon Clarke, who are also part of the farmworker movement’s history.

According to the Tom & Ethel Bradley Center, Kouns’ shot the pictures for neither money nor credit but to help preserve the legacy of what made the farmworkers movement so powerful. He drew his inspiration from the people on the margins of the movement and not necessarily from its leaders.

Clarke was also a volunteer during the movement. The Tom & Ethel Bradley Center stated that Clarke used his work to “reveal the reality of social struggle … by documenting the union’s activities on the picket line, in meetings, at rallies, and in the labor camps of the San Joaquin Valley.”

Journalism Professor and Director of the Tom & Ethel Bradley Center José Luis Benavides said, “The diversity of this coalition is reflected in the images taken by these two photographers, Kouns and Clarke, who joined the farmworker movement as participant visual workers and used their talent to document the movement.”

The center’s goal is to educate those who may not be familiar with the movement, especially students from marginalized communities.

Marquez said that the photographs represent a fragment of the farmworker’s struggle.

“They represent just another iteration of that struggle for not just human rights, but for respect, for dignity, for recognition — of not just their labor — but recognition of their basic humanity,” Marquez said. “They too are deserving of respect and recognition and consideration.”

The center is in the process of creating do-it-yourself educational exhibits, where the materials will be curated and packaged for schools, community centers and more. “These materials can be displayed according to each institution’s spatial needs and can be printed on demand,” Marquez said.

Only a portion of the images have been released to the public. However, the center is in the process of developing bilingual text that includes dates, photographers’ names, and historical and social context to accompany the photos.