Front and center: An inside look into CSUN’s music department 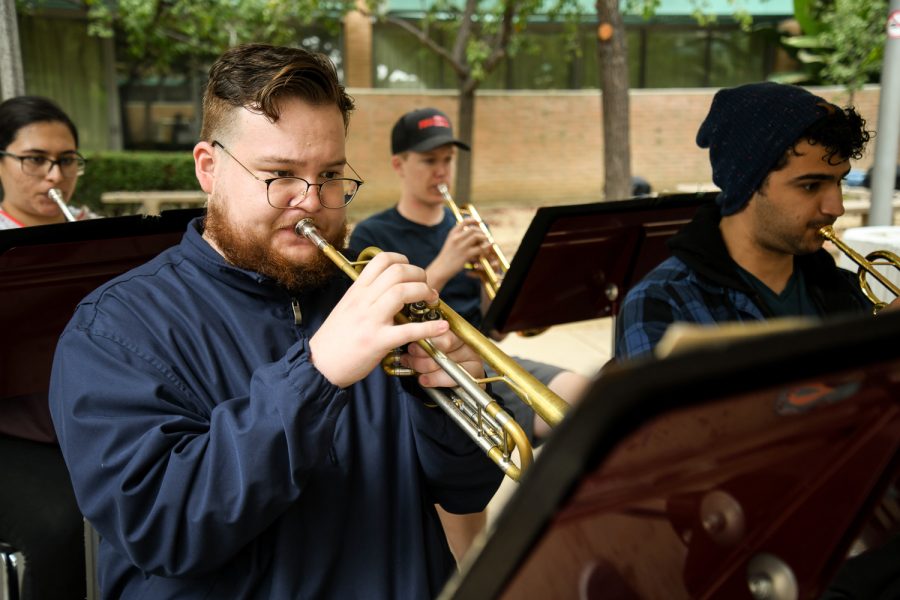 After a year of persistence, live music and concerts are beginning to rebuild. The music department at CSUN continues to contribute to what live music means to the university and the community.

The music program prepares students to gain skills garnered toward their goal of working in the music industry. These resources include guest speakers, an in-house record label and student-organized live events across Los Angeles.

“The music department hosts several panels with a whole bunch of heavy hitters in the industry,” said Jenny McNabb, a recent alumna of the program. “We’ve had the manager of Tame Impala come and visit, Neon Trees, tons of folks that work with people who’ve done recent hits.”

In collaboration with the Music Entertainment Student Association, the music department hosts Industry Insights, an event where experts in the industry share their experiences with students.

The music department is part of the university’s strategy toward steering the campus into a center of music education and entertainment in the San Fernando Valley.

“The Music Department is what makes CSUN one of the strongest music schools in the country,” said head of the music industry studies program, Jeff Izzo. “We owe it to having robust programs that actually put students front and center in the business aspects of music.”

CSUN has invested in venues such as the Younes and Soraya Nazarian Center for the Performing Arts, which opened in 2011, and transformed a small college radio signal into a landmark music station, 88.5 FM KCSN.

The music industry studies program is one of the largest sections in the music department and has been instrumental in incorporating business education, performance and elements of media law and production.

“With apologies to New York, Nashville and London, L.A. is still the epicenter of the music world,” Izzo said. “There are tons of publishers, studios, small record labels, touring companies and venues that all use our students as interns and hire them when we graduate.”

Students interested in the major will need to audition as the program is an impacted major. For the first time since the beginning of the pandemic, the music department is holding in-person auditions in February and March 2022.

Once accepted, new students have access to resources and organizations unique to the music department, such as the program’s own record label, Five of Five Entertainment.

CSUN Professor Emeritus Joel Leach created Five of Five Entertainment 25 years ago as an opportunity for music industry students to learn the skills of the music trade when they enroll in Music 493C: Music Industry Practicum, a yearlong course.

Overseen by Izzo, students learn how to manage and market musicians, organize live events in venues and publish local artists from the San Fernando Valley.

Five of Five Entertainment organizes “The Drop,” a live show at the end of the year which showcases the artist they’ve signed onto the label. Once the artists release music on their label, the students host an EP release party off campus.

Five of Five and Industry Insights are funded by the Mike Curb Endowment Fund, named after country music label executive, former Lt. Governor of California and CSUN alumni, Mike Curb. Curb endowed $10 million to the College of Arts, Media and Communication, which originated in 2006.

Curb’s endowment has propelled the university’s ventures in music education and performance arts. This includes the founding of the Soraya, as well as 88.5 FM KCSN which was created in 2010.

The Soraya has a 1,700 person capacity, similar to venues like the Orpheum Theatre and the Novo in downtown Los Angeles.

Although it has no academic affiliation with the music department or CSUN altogether, Izzo says the Soraya remains a key landmark as the only legitimate live music venue in the San Fernando Valley.

“It truly is the only venue in the Valley, but it’s also more than that,” Izzo said. “It’s a world-class venue and a beautiful building overall that’s come a long way.”

Following a dormant period of the COVID-19 pandemic, the Soraya Center began its first season of live music in over a year. The Soraya’s reopening hopes to bring back the live music events that have been missing on campus since the pandemic began.

Much like the Soraya, 88.5 FM KCSN holds few academic ties to CSUN, but impacts the Valley as the only non-commercial, non-profit HD FM radio station in the Greater Los Angeles Area.

Alongside the Soraya Center, KCSN forms a unique push-and-pull with the music department at CSUN. Although they are not connected, they both tie into the overall musical experience at CSUN.