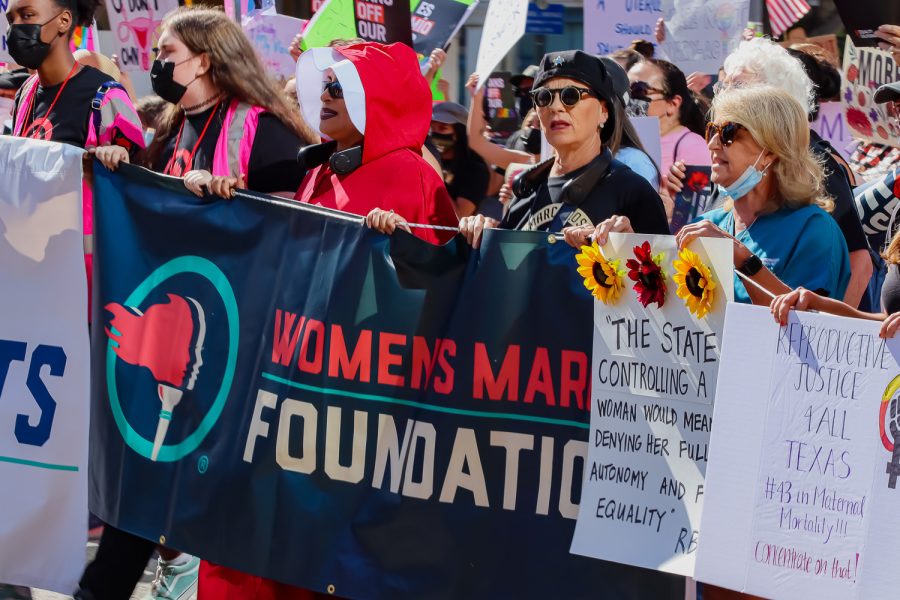 The crowd walks toward City Hall at the march for women’s reproductive rights organized by Women’s March in downtown Los Angeles, Calif., on Oct. 2, 2021.

This photo essay is the visually focused version of our written piece on the Oct. 2 women’s marches across Los Angeles. To read the written piece click here.

Crowds gathered on the streets of downtown Los Angeles, Beverly Hills and North Hollywood on Oct. 2 to march in solidarity for the women of Texas. The marches were in response to the Texas abortion law that passed on Sept. 1.

For the Women’s March in downtown Los Angeles, thousands of participants covered the streets in a sea of pro-choice imagery. Volunteers passed out water bottles to participants walking from Pershing Square to City Hall on the warm October day. Feminist speakers from all sectors stood on a large stage to address the crowd and media who were seated in metal risers parallel to the stage.

Dr. Stephen Rabin, a obstetrics and gynecology specialist, organized a sign holding rally in Beverly Hills. Messages advocating for reproductive rights were held high for cars passing by the iconic Beverly Hills arched sign. The handmade signs from the participants were held to send direct messages in hopes the federal government would intervene.

All three demonstrations provided space for those to express their feelings toward the Texas abortion law.

Speakers such as Paxton Smith and Gloria Allred spoke at the downtown Los Angeles and Beverly Hills demonstrations. Smith, who was a valedictorian at Lake Highlands High School in Texas, made an impromptu speech that caught the nation’s attention. Allred is a feminist lawyer who advocates for victims whose rights have been violated. She has been fighting against injustice and fighting for women and minorities’ rights for the last four decades. Allred is most well known for her work representing Norma McCorvey — also known as Jane Roe in Roe v. Wade — and the family of Nicole Brown Simpson in the O.J. Simpson murder trial.

“Before Roe v. Wade, doctor’s hands were tied by belief-based legislation, and they were not allowed to provide abortions. Patients had to take it into their own hands, and as a result, thousands of women died. We cannot, we will not, go back to the days when the only way to end the pregnancy is to risk our lives … we are not vessels for reproduction, we are human beings, and it’s time that we get treated like it,” Smith said, “The principles of this nation are freedom, liberty and equality. When a government oversteps its bounds, when a government turns its back on those principles, we will not stay silent about it.”

Though there were no stages or sound systems, the voices of the North Hollywood demonstrators echoed throughout Vineland Avenue. Although the crowd was not as large as the demonstration in downtown Los Angeles, the energy was equally met.

There was a sense of unity among North Hollywood’s march for reproductive rights. The people who marched the streets not only continued to spread the message of the day but the smaller crowd size — which reached close to 500 participants — allowed for more community interaction. People who have never met before shared personal stories and discussed the effects of the Texas abortion law.