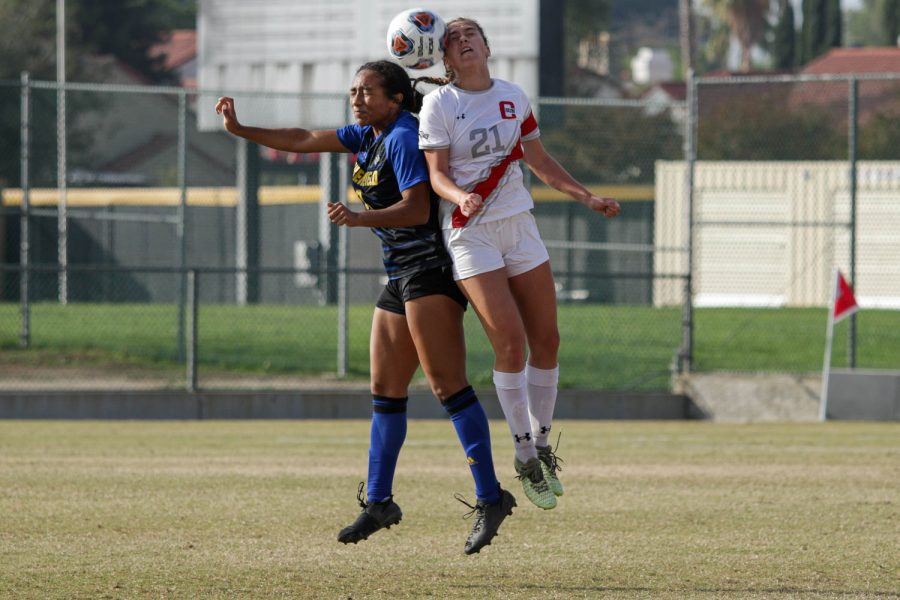 CSU Bakersfield's Darian Tatum, left, and CSUN's Ashly Torres jump to get the ball during the last game of the season at the Performance Field in Northridge, Calif., Sunday, Oct. 31, 2021. The Matadors lost 2-0.

On Halloween evening, the CSUN women’s soccer team had a frightening end to their season at home with a 2-0 loss to the California State University, Bakersfield Roadrunners.

CSUB came into the match winless in the Big West Conference and hasn’t beaten CSUN since 2009, with CSUN holding an overall record of 5-1-1 against them.

Both of the Roadrunners goals came in the first half of play by freshman Karen Flores in the 11th minute and senior Litzy Pimentel in the 22nd minute.

CSUN had many opportunities in the first half by applying pressure early. CSUN’s first shot on goal came in the second minute by a Cindy Arteaga low shot that was saved by the CSUB goalkeeper, Haley Slouka.

Flores’ goal for Bakersfield was shot from the top of the box that netted high center away from CSUN goalkeeper Elizabeth Bornhauser. CSUB didn’t have a shot on goal until that score while CSUN led the shots on goal midway through the first half.

The Matadors had a chance to tie it in the 20th minute with the help of Arteaga, who was able to find space to get her shot off, but the shot missed high off the goalpost. Arteaga led the team with three shots on goal.

In the 22nd minute, CSUB midfielder Kiara Oliver sent a pass into the box where their senior forward Pimentel collected the ball and bent it low center for a goal, making it 2-0 in the first half.

Minutes after the 2-0 extension by Bakersfield, CSUN made a goalkeeper substitution, bringing in senior Amanda Delgado.

CSUN continued to push the tempo by shooting at the net any chance they could get. In the 31st minute, Matadors defender Dayne Wagner shot a cross pass to midfielder Ashley Cruz, who was able to get a shot off but it was saved by Slouka.
The Matadors came out of the second half with a little more boost. In the 55th minute, forward Alyssa Aguilar had a moment to stop the bleeding, but her shot was inches off the crossbar, which resulted in a corner kick.

CSUN spent the entire second half trying to get on the scoreboard but CSUB goalkeeper Flavia Burrell, who substituted for Slouka, shut down any chance they had. CSUN finished the game leading with nine shots on goal and 18 total shots.

As the game winded down and the final horn sounded off, the CSUN women’s soccer team expressed sadness and disappointment on their faces for ending their season with a loss.

Sunday’s spooky season finale on Halloween was the final game for the Matador’s senior class. CSUN will be losing seven seniors including starters like Delgado and fifth year senior, Sydney Gilbert.

“If it wasn’t for this program, I wouldn’t be the goalkeeper I am today,” said Delgado, who also mentioned that she doesn’t think her goalkeeping days are behind her after this season.

Gilbert, who hails from San Diego, didn’t know anything about CSUN at first, but she feels as if she is a part of the community five years later.

“I have made a lot of connections that I’m sure will last a lifetime,” Gilbert said.