CSUN students compete in a Squid Game-inspired competition on campus 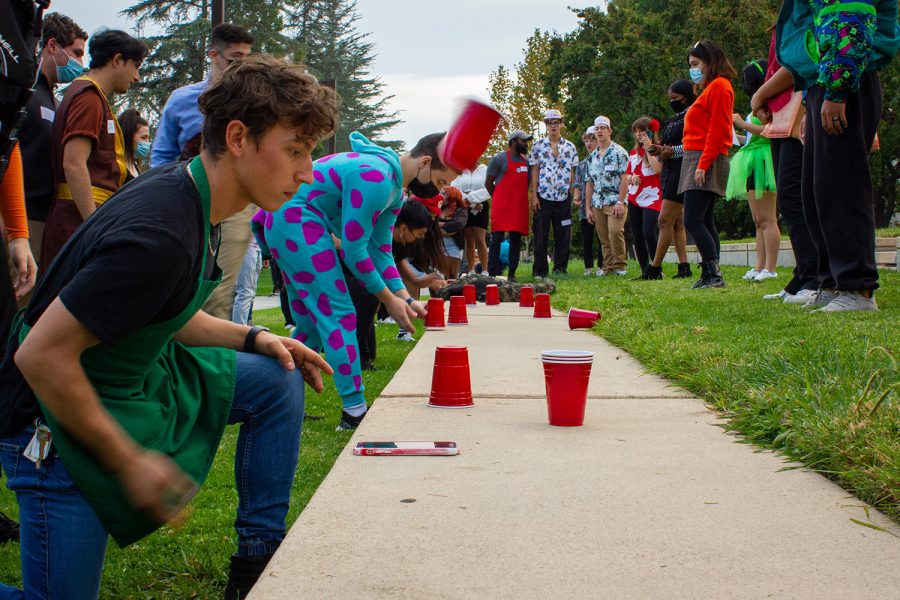 Teams of five line up and try to flip a red cup on the University Library Lawn in Northridge, Calif., on Sunday, Oct. 31, 2021.

On the evening of Halloween, CSUN students battled out against each other in a series of games inspired by the popular South Korean Netflix series “Squid Game.”

The event was organized by CSUN’s InterVarsity Matador Christian Fellowship, or IVMCF, and more than 40 students participated, dressed in costumes ranging from Kim Possible to Frozone from “The Incredibles” in front of the University Library. The students competed to win first place and the grand prize — a $50 Target gift card and a gift basket full of candy.

Although the grand prize wasn’t as glorious as the 46 billion won (equivalent to $39 million) in the Netflix series, the purpose of this competition went beyond the material rewards it had to offer.

Despite the competitive spirit displayed by the contestants through cheers of encouragement and friendly trash talk, the ultimate goal of the event wasn’t about bragging rights or winning it all. Rather, it was about the bonding experience that would allow students to connect with their fellow Matadors, something that became foreign to many due to COVID-19.

Meljon Salazar from IVMCF expressed the importance of this event for students after more than a year of social isolation due to the pandemic.

“For us, it was just seeing everybody meet new people, connect in a deep way. For us, hopefully this isn’t just one event, but that people make connections and new friends that they get to study with, that they get to know more about,” Salazar said. “We hope that this can be a catalyst for that.”

CSUN sophomore and IVMCF member Anthony Gramajo had similar intentions of communal bonding in regards to the event.

“If we all can actually come by and support every one of us, it would be awesome and that’s what I’m here for,” Gramajo said. “To support everyone and have a good time.”

The event consisted of five different activities. “Red light, green light” was the first game to kick off the competition, just like in “Squid Game.” Starting from the far right end of the University Library lawn, contestants had three minutes to reach the finish line at the left end of the lawn while following the judges’ commands.

Dozens of students alternated between sprinting as fast as they could when the judges yelled “green light,” and coming to a halt when they heard “red light.” Those who crossed the finish line on time received points, with first place receiving the most.

Following “Red light, green light,” students grouped up into teams of five for the second game called “Flip cup.” Each team lined up into rows and were tasked with flipping over a red plastic cup onto its rim. Once everyone in the team successfully flipped the cup, every player in the group won points based on how fast they completed the challenge in comparison to opposing teams.

The third game brought a twist to the competition. Each contestant was assigned a shape: triangle, circle or square. Based on the shape given, contestants were surprised with a unique activity of either cornhole, frisbee throwing, or “rock, paper, scissors.”

Inching closer to the final game, “tug of war” was the fourth activity. Here, teams of 11 took ground on opposite ends of a rope as they put all of their strength and energy into making their opponents stumble across the centerline.

For the grand finale, the fifth and final game was “Ships and sailors,” an activity similar to “Simon says.” Contestants had to perform an action that correlated to the given command. The terms “sailor” and “ship” meant to either run left or right, while “three men rowing” required contestants to group up into three. Those who failed to follow the commands, or were left out of a group when it was time to partner up, were eliminated from the game.

After a hard-fought battle among the more than 40 contestants, it was CSUN student Joel Aleman, also known as “player 026,” who ended up winning IVMCF’s first-ever “Squid Games.”

Aleman was happy about his first-place victory, especially because of his performance during “Red light, green light.” Despite slipping in the mud during the game, it didn’t prevent Aleman from making a comeback and eventually winning it all.

“I was lowkey surprised. I wasn’t expecting to win because in the first round I kind of bombed it,” Aleman said.

Ending the event, Salazar encouraged everyone to exchange social media handles and phone numbers. This restated the ultimate goal of the game: to form new friendships.

With many coming into the competition not knowing one another, the camaraderie of the competition sparked a catalyst for the students to get to know each other. In celebration of Halloween, everyone was provided with a goodie bag full of candy and, possibly, left the event with a new friend.