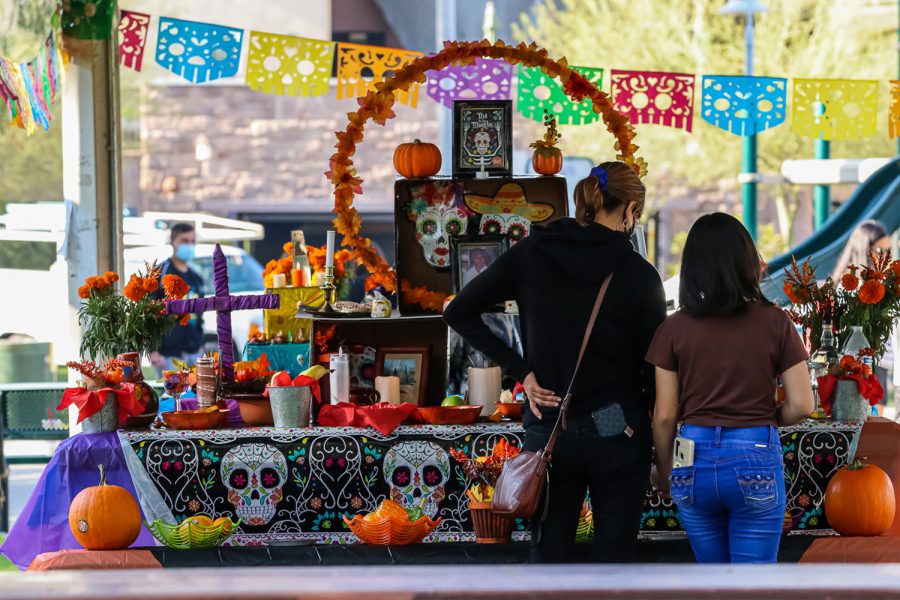 Visitors look at the ofrenda at the Día de los Muertos Cultural Festival in the San Fernando Recreation Park in San Fernando, Calif., on Saturday, Oct. 30, 2021.

CSUN student organizations Colored Minds Inc. and Dreams to Be Heard organized a Dia de los Muertos community altar in order to raise money for CSUN students living in the United States without legal status, as well as to honor lives that were lost at the U.S.-Mexico border.

In collaboration with Immigo Los Angeles, an organization that provides resources to immigrants like citizenship counseling and legal aid, Colored Minds and Dreams to Be Heard sold everything from homemade pan dulce to succulent plants during the event.

According to Dreams to Be Heard President Zeltsin Herrera, funds could be used to pay for things like rent or certain fees that come with applying for citizenship. According to the U.S. Citizenship and Immigration Services, it can cost over $700 to apply for citizenship.

Approximately 1,300 undocumented students are attending CSUN, according to Dreams to be Heard, an organization that provides a support system for AB 540 students — nonresident students who are exempted from paying nonresident tuition because of Assembly Bill 540.

Natalie Castillo, a member of Dreams to Be Heard, understands certain challenges that non-citizen students may face when it comes to making ends meet.

“I’m a citizen so I can get a job easily, but for an undocumented immigrant, I understand that it can be a lot tougher to find work and obtain other basic things like healthcare,” Castillo said.

Herrera said her organization provides free citizenship classes to immigrants, while advocating for an easier path to citizenship.

“Right now we’re really pushing for a pathway to citizenship with the new administration,” Herrera said. “We want something beyond [the Deferred Action for Childhood Arrivals program] and [Temporary Protective Status]. There are children who have been here for a majority of their lives and don’t qualify for anything … we want some type of change.”

DACA and TPS are programs that temporarily allow certain immigrants who live in America without legal permission to be safe from deportation and have access to a work permit. DACA is for people who were brought to the country as children and must be renewed by the recipient every two years. TPS applies to people from specific countries that may be facing military conflict or environmental disaster.

A community Día de los Muertos altar was set up where students could bring photos of their loved ones. The altar was also filled with pictures of migrants whose lives were lost while in U.S. Immigration and Customs Enforcement custody.

Magybet Mendez, founder of Immigo Los Angeles, wanted to make sure that they would not be forgotten and be remembered on Día de los Muertos.

Around 20 colorful altars were made this year for the ninth annual Día de los Muertos art installation throughout Grand Park in downtown Los Angeles. Families were able to leave photos and memorabilia to honor and remember their loved ones for the traditional celebration.

Nationally, the Day of the Dead is a Mexican holiday where people honor the dead by providing offerings of food, water and other indispensable items by displaying an ofrenda in their memory.

Some of the items include photos, bread, candles and cempasúchil, or flower of the dead, to guide their loved ones’ souls to the final resting place.

The community-oriented event was on display from Oct. 22 through Nov. 2. The 12-day public art installation, presented in partnership with Self Help Graphics and Art, included artwork from East Los Angeles Women’s Center, Eastside LEADS and The Wellness Center.

Aurora Montoya, who was admiring the altar for those who lost their lives to COVID-19, said she lost 14 family members to the disease, including uncles and cousins.

“This is hard for me to see because I almost died with COVID and it took a lot of my family members,” Montoya said.

Montoya said her daughter was also sick but was able to recover.

The park also offered the option of listening to pre-recorded audio with insights of each altar to create a vivid viewing experience.

On Oct. 23, the celebration held Noche de Ofrenda, or Night of the Offerings, a contemplative ceremony and night of reflection that connects communities to traditions, and highlights indigenous practices during a contemporary celebration.

The smell of sage diffused throughout the Día de los Muertos cultural festival in San Fernando last Saturday. It spread from the open clearing adjacent to the baseball fields at the recreational center to the entire block.

It accompanied the magnificent diversity of colors and shapes in the dyed pheasant and rooster feathers among the headdresses worn by the Aztec dancers performing at the event’s ceremonies. The glowing orange from the Aztec marigold flowers sat next to the favorite foods and drinks of the deceased on the many ofrendas displayed around the park.

All of which contributed to the mosaic of a celebration that incorporates both pre and post-Columbian Latino traditions known as Día de los Muertos.

“Day of the Dead, or Día de los Muertos, is a day that we honor and celebrate our ancestors and it’s nothing like the way, let’s say, other celebrations can be because this one … celebrates death,” said Raul Herrera, the leader of the closing Aztec dance and ceremony. “We do it in a festive way. We do it in a way where we celebrate it with music, with food and dances, and traditional activities.”

Herrera explained that most days following a death are usually more morbid, filled with grief and dark colors. But this day is different.

“We’ve already done that part, of mourning the dead. Now it’s about celebrating death,” Herrera said. “When you build an ofrenda and you have images that represent them. These mementos are a way of allowing us to continue passing this tradition to the next generation. So that when it’s their turn to pass, they’re going to be remembered.”

The passing of this tradition, and how long it has been passed down, was evident in all of the imagery, music and food at the event. Not only are the aspects of the day’s origins in Aztec culture apparent, but so are their blend with post-Columbian Catholic elements. An ancient Aztec game called ullamaliztli, the precursor to basketball and soccer, was being played next to an ofrenda decorated with salt crosses and candles.

The ceremonies, ofrendas, mementos and gatherings are not just an aide, or even reprieve, to the grieving process; but they are also an invitation to the dead to cross over from the other side and join in on the festivities. A bridge from the past to the present and from the dead to the living.

“We technically have a skull within so we are the walking dead. Everyday we take a step forward in life, we take a step closer to death,” Herrera said. “The celebrations, putting on the Day of the Dead makeup, wearing skulls, that’s part of it. We are going to experience that. It’s inevitable. It’s a way of allowing ourselves to accept it, acknowledge it, and at the same time not be afraid of it.”

Manuel Velazquez, local mural artist and art teacher at Panorama City High School, discussed what the holiday means to him and how it’s embedded in his teachings. He also discussed how non-Indigenous people profit off of the Mexican celebration and how he feels about it.

Growing up in a Latino and Chicano-centertic neighborhood, Velazquez participated in many different types of cultural celebrations such as Día de los Muertos by helping his mother make flower arrangements, create crafts and conduct other activities.

These experiences have shaped the way he teaches his students today.

By allowing students to play to their strengths and giving them control over the style of art they want to produce while still keeping the theme of Día de los Muertos, Velazquez is able to educate his students on the ethnic background surrounding the celebratory holiday.

“It’s a joy that I’ve been able to use Día de los Muertos as a tool to engage them but also teach them the basics of graphic design,” said Velazquez.

Going on his 45th year of being a muralist, Velazquez has worked for many different events in his career, but he’s cautious of ones he feels don’t respect the culture behind Día de los Muertos. He said the original purpose is the celebration of the dead, but some events are more invested in brand advertisements and sponsorships.

While speaking about his experience with Hollywood Forever Cemetery in Los Angeles Día de los Muertos event, Velazquez said after working with them in previous years, he will never go back there due to the event selling out.

“It’s ridiculously overpriced and sponsored by the alcohol industry and cheese manufactures so it’s kind of become non-cultural to me,” Velazquez said.

He also shared his frustration about non-Indigenous makeup artists and other creatives using Día de los Muertos as a method of profit, or altering their prices around this time of year because they know it’s coming up.

Velazquez said he is more interested in working for events that he feels will be respectful of the celebration, such as Pacoima’s City Hall, where he has been in charge of designing the mural for eight years.

Now, Valzquez has the chance to incorporate his students’ art work into the event.

Velazquez welcomes all ethnic backgrounds to join the celebration of the dead. He teaches a large number of English learners who immigrated from places like Guatemala, El Salvador, and Honduras. One of his students immigrated from Afghanistan.

“To see her get involved in learning about how we celebrate life and death, she was able to make a lot of connections and similarities too,” Velazquez said.

Velazquez said he explains to students and shows examples of different cultures around the world that celebrate the dead in different methods that may be perceived as unordinary to other communities. Whether it is familiar or not, he pushes his students to learn about Día de los Muertos to prepare them for the future.

“[Teaching] Día de los Muertos in a classroom is like, ‘Oh so, what happens if your mom passes away or your pops?’ You know you have to have a plan,” Velazquez said.

The celebrations and traditions of Día de los Muertos have adapted to societal changes such as technological advances and COVID-19 protocols. This year’s Pacoima celebration featured a 10-foot screen, and allowed people to email photos of lost loved ones through the years and from COVID-19.

Velazquez has been met with criticism from others in the community who are hesitant of the modern innovations used during the celebration.

“Times are changing, we got to roll. We’re still holding on to a lot of the tradition, but we have a new generation of people. Their minds aren’t like ours, so we have to be open to [change to] continue this tradition,” he said.

He said that many different ethnic groups were present at this year’s Pacoima City Hall event, ranging from the Samoan to the Sikh community, which he feels helps combat the common perception of the city because of its crime rates.

“You know it’s always something violent or gang related,” Velazquez said. “It’s always good to kind of share the positive and the cultural stuff that heals everybody.”