Review: An Evening with Branford Marsalis 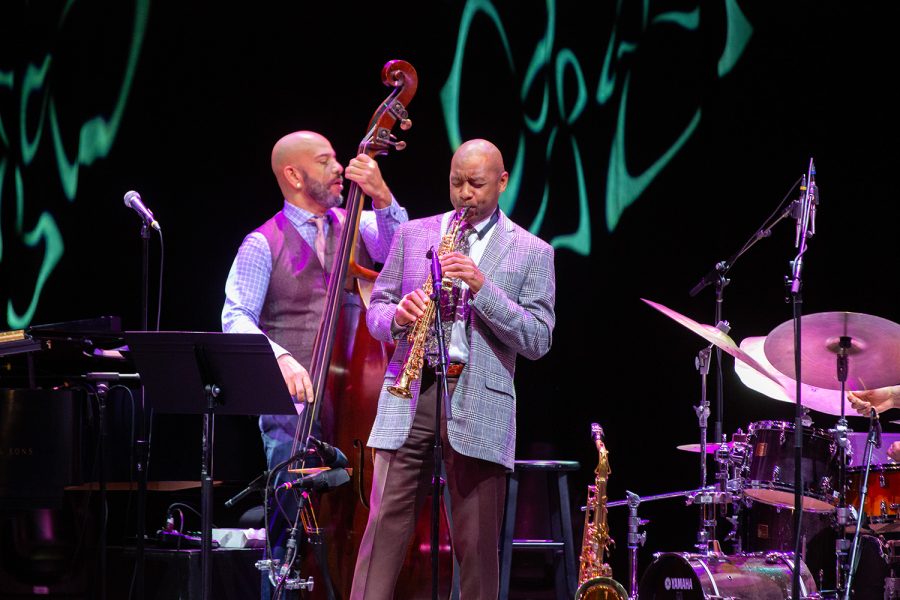 As people walk into the great hall and microphones get tested, the acoustics pick up a spectrum of sounds. Among the chatter and the shuffling of seats, a ride cymbal pinging and a pin hitting the floor can be heard.

When the lights dim and the crowd’s noise fades, Younes and Soraya Nazarian Center for the Performing Arts Executive Director Thor Steingraber walks onto the stage and welcomes the crowd to the first in-person concert of the semester.

Steingraber thanked first responders in attendance and introduced the Branford Marsalis Quartet to the audience.

Every sound has its purpose, and every noise is a character.

People do not go to a jazz show to see stellar songwriting, intense crowds or even musical innovation. They go to see character, reimagination, rearrangements of songs and onstage charisma. Audiences are there to see someone showcase themselves through their instrument. A jazz show is the musical equivalent of watching a play made up of character actors and we, as an audience, are not there to read their script.

All of the stakes in a jazz show rest on how the artist performs the music, and very rarely on which songs the artist chooses to play. Renowned saxophonist Marsalis knows this very well.

As a member of the Marsalis family, Branford grew up learning music from his father, jazz legend Ellis Marsalis, alongside his brother, trumpeter Wynton Marsalis.

Walking into the Soraya I was surprised to find it mostly empty until 10 minutes before the concert, when a flood of people rushed in and turned the venue into a full house almost instantly.

I saw the strangest mix of demographics in attendance, with young adults in their 20’a sitting alongside older concertgoers in their 70’s.

“You wanna hear a jazz joke? I’ll tell you a jazz joke,” said Marsalis to the audience as the band set up. “A son says to his father, ‘When I grow up, I wanna be a jazz musician.’ The father says, ‘Son, ya can’t do both.’”

Without hesitation the band began playing an incredibly high-tempo freeform opener that was, while musically and technically impressive, incredibly hard to digest and listen to. It felt like a warm-up for the group, showcasing their collective ability to play off each other at blazing speeds. Justin Faulkner’s powerhouse drumming was mesmerizing to watch, especially with the time signature changes throughout the song.

Initially the opener worried me, as I was concerned that the entirety of the concert was going to have the same intensity throughout, but the band’s second song, “A Conversation Amongst the Ruins,” put me at ease. Pianist Joey Calderazzo’s melancholy passages felt more like a soundtrack piece to a dystopian film’s score than a traditional jazz song, and it truly blew me away as a listener. The lengthy piece built slowly over the course of a few minutes, leading to a massive interlude with the full band.

Marsalis’ playing truly shines in moments and songs like these. He is able to seamlessly blend dynamics and match the energy of a given section. Whether it be playing a loud blistering solo or a soft melodic motif, Calderazzo and Marsalis have an onstage musical camaraderie that is obvious and fascinating to watch — especially during noisier interludes in their original compositions.

Throughout the 90-minute show, the band played a mix of original songs and older jazz standards, which gave the audience a sense of familiarity. However, the performance came with a tradeoff. While the quartet played standards like “When I Take My Sugar to Tea” beautifully, the group’s renditions were very true to the contemporary versions of the standards, and as a result came off as a bit too safe.

The length of the show was perfect, and combined both old and new songs. Marsalis and his band have shown that they are well within the mastery of their respective instruments, and that their original compositions are truly captivating to watch in a live performance.

Conversation amongst the ruins

When I take my Sugar to Tea (Standard)

You Never Come to Me

My Bucket’s Got a Hole in It