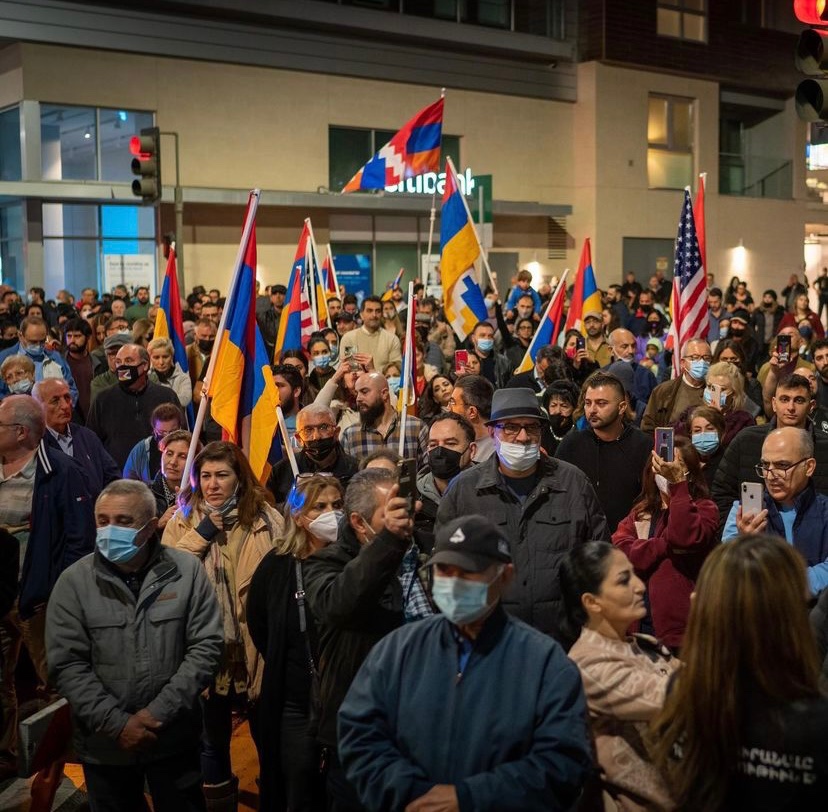 A crowd gathers outside of the Armenian consulate in Glendale, Calif., on Nov. 10 to protest the military conflict between Armenia and Azerbaijan.

The Consulate General of Armenia in Los Angeles was surrounded at 7:30 p.m. on Nov. 10 by the Armenian Youth Federation and other supporting community members in protest of the trilateral agreement that brought an end to a weeks-long military conflict between Armenia and Azerbaijan.

Hasmik Burushyan, a 23-year-old member of the central executive board of AYF’s Western United States chapter, organized the protest to create a space for local Armenians to express their frustration with the agreement, which was brokered by Russia.

“We are gathering here today because that [agreement] doesn’t represent the Armenian community’s needs,” Burushyan said. “We are going to mark one of the darkest days of our nation. Also, we are going to stand strong and deliver our demands to the government of Armenia and the prime minister that the diaspora does not stand with him. We are against this statement.”

The trilateral agreement was signed by Armenia, Azerbaijan and Russia on Nov. 10, 2020. The agreement entailed a ceasefire and the surrender of Armenian-controlled territories in the Nagorno-Karabakh region, also known as Artsakh by Armenians, to Azerbaijan. It also gave Russian peacekeepers control of the Lachin corridor, Armenia’s only physical connection to Artsakh.

The crowd gathered on North Central Avenue that evening holding Armenian flags and signs in protest against the current government in Armenia, and stood in solidarity with the Armenian people on the one-year anniversary of the end of the 2020 conflict.

A large photograph of Armenian Prime Minister Nikol Pashinyan, who signed the ceasefire agreement, was pinned against the consulate with spray paint covering his likeness.

As the protest began, one of the speakers, 24-year-old AYF board member Raffi Jivalagian, gave an impassioned speech against the government of Armenia, pinning the loss of Armenian-controlled land and deaths of Armenian soldiers on Pashinyan.

The crowd began to chant “Nikol traitor!” in Armenian moments after Jivalagian said, “It is with great confidence and conviction that I say, Nikol Pashinyan, enemy of our state, is a traitor and deserves the harshest of consequences for his treasonous actions during and after the third Artsakh war.”

Armenians from all over Los Angeles attended to show their support for the anti-Pashinyan movement, including Elena Semerdjian, who works as a Glendale city commissioner on the Commission on the Status of Women.

Semerdjian’s father served as a commander in the first Nagorno-Karabakh war and lost his life when Semerdjian was just 2 years old.

“This administration has undone all of the hard work of Armenian patriots and is pursuing a pan-Turkish and globalist agenda that is against the interest of the Armenian people,” Semerdjian said.

The protesters in attendance that night were passionate, demanding for justice.

“Justice is free, independent, and unified Armenia. Armenia deserves its freedom and liberty,” Semerdjian said. “The Armenian spirit is much like the American spirit. Freedom has always been our guiding light. Give me liberty or give me death.”