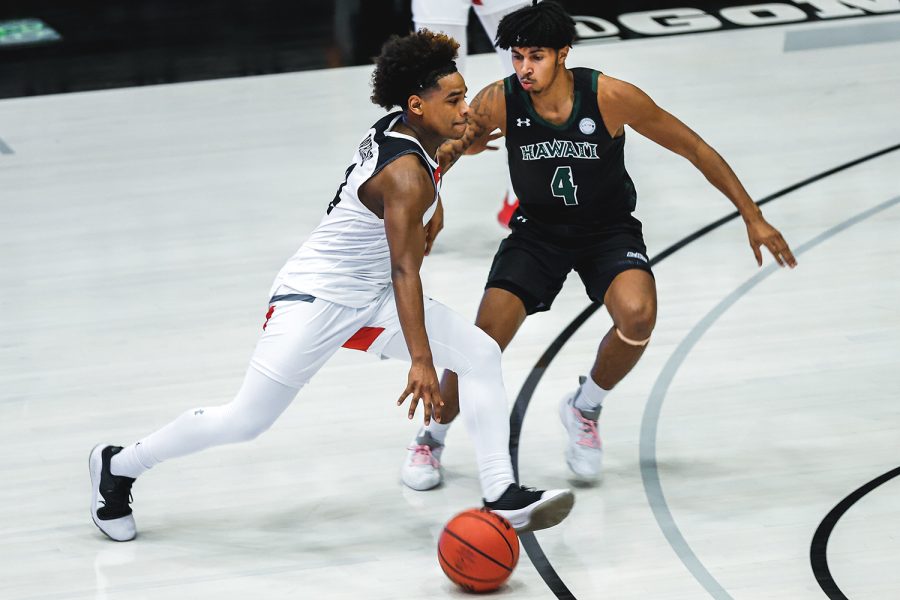 Atin Wright, left, drives past Hawai'i's Noel Coleman during the first half of their game between the Matadors and the Rainbow Warriors in the Matadome in Northridge, Calif., on Feb. 19, 2021.

Basketball season has arrived at CSUN and sophomore guard Atin Wright started the year off by demonstrating a lights-out shooting display.

CSUN opened the season with back-to-back losses to USC and Notre Dame. Despite the slow start, Wright has continued to contribute up and down the court.

Wright has averaged 11 points in the first two games of this season and has done it with great efficiency. He is averaging 47% from the field, 55% from the three-point line and 100% from the free-throw line.

“The key [to scoring the ball efficiently] is really in practice and repetition,” Wright said. “My coach always tells me to practice with more intensity, so when I get in the game my shot will come easy.”

CSUN named Trent Johnson the new head coach over the summer and it has brought a sense of belief to the team. According to Wright, the new coaching staff has helped him focus and understand the bigger picture.

Wright has shown improvement compared to his freshman year at CSUN. He has increased his scoring output by 6.3 points and has seen drastic changes in his shooting percentages since then.

“I feel like my teammates trust me to do what I do well, which is to score, so this continues to help me grow as a player,” Wright said.

Wright’s ability to score has followed him since his time in high school at Fairmont Preparatory Academy in Anaheim, California. Wright only played two seasons for Fairmont Prep, but he averaged 24.1 points per game. His scoring efforts allowed him to secure a Player of the Year award in his junior year at Fairmont Prep.

Wright has big goals for himself and the team this year.

“I want to get to a place where every coach knows that I’m going to be a problem for them,” he said. “My goal for the team this year is to win the Big West tournament and be able to experience and compete in the NCAA tournament in March.”