Opinion: Having Big Tech in charge of censorship is a slippery slope to disaster 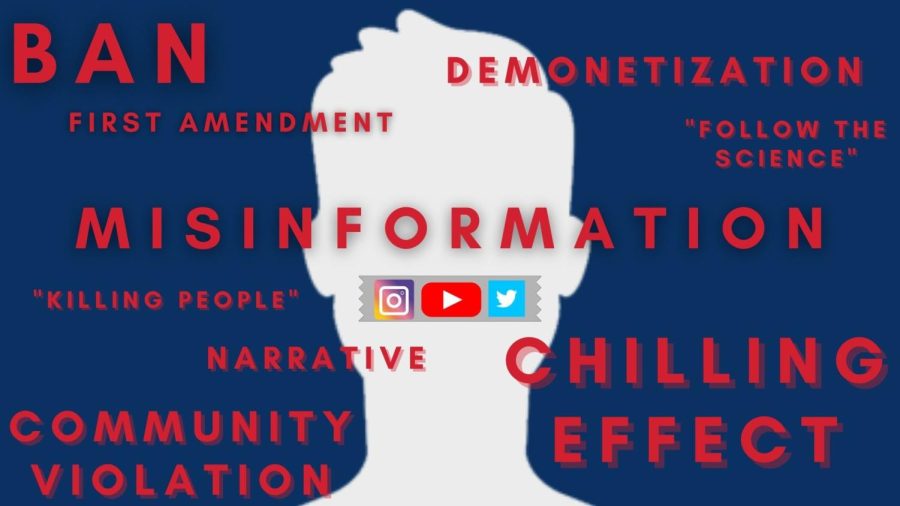 Big Tech has been doubling down its efforts to censor misinformation, especially when it comes to the topic of COVID-19.

On Sept. 29, YouTube announced it would ban content that claims any approved vaccines are dangerous or cause side effects, including any information that contradicts local health authorities or the World Health Organization.

Big Tech is taking decisive action toward controlling the flow of information, which in turn determines what information their users can see.

Social media’s efforts — by way of the government — at controlling the narrative is going too far. Additionally, our government’s role in strong-arming Big Tech to crack down on misinformation crosses a line.

This censorship regime under the guise of the coronavirus is beyond troubling and sets a precedent that I don’t think any of us are ready for.

Let me be clear, I am not saying misinformation is good. I am saying that censorship is bad because who is the gatekeeper that determines what is right and what is wrong information? And will they keep the public’s best interest in mind without political or financial bias?

When Big Tech uses the term “vaccine misinformation,” this is code for any statement that departs from official government rhetoric. This has nothing to do with truth or falsehoods, but more to do with political implications. Because let’s face it, this is a political as well as medical conversation.

Posts that question the validity of masks, vaccines and origins of the virus have been flagged, blocked and removed. Some users have been banned for sharing this information on their feeds.

A video from a recent Committee on Homeland Security and Governmental Affairs meeting featuring Peter Doshi, an associate professor of pharmaceutical health services research at the University of Maryland School of Pharmacy, was removed by YouTube because Doshi was accused of spreading medical misinformation.

Doshi, the senior editor at the British Medical Journal, whose research focuses on the drug approval process, spoke before the committee and criticized vaccine mandates, the efficacy of the vaccines and called for cautionary use of experimental vaccines. Doshi’s testimony was not persuasive but rather the opposite, as it attempted to pose thought-provoking questions.

Within days, the discussion that occurred on Capitol Hill was blocked by YouTube. Further proof that even the discourse within the halls of our democratic institutions isn’t safe for human consumption.

YouTube stood by their decision, saying they will not allow medical misinformation about COVID-19 “that poses a serious risk of egregious harm in contradiction with local and global health authorities’ guidance about COVID-19 treatment, prevention, transmission and social distancing.”

When videos are flagged and removed from YouTube, the channel creator is given a strike and sometimes their channel is demonetized, stripping them of their income.

Doshi is not the only medical expert that was censored on YouTube. This is just one of many examples and censorship is not just exclusive to YouTube. It’s rampant across all social media platforms.

Instagram got in on the fun when some users claimed they could not access search results for the hashtag #NaturalImmunity. The blocked hashtag incited accusations that Big Tech was guilty of censorship.

Users were baffled as to why the hashtag would be banned if the effectiveness of natural immunity over the vaccine is still under debate.

Dr. Anthony Fauci told CNN’s Dr. Sanjay Gupta that he did not have a firm answer on whether people who contracted COVID-19 have comparable, if not more, immunity to the virus than those who have been vaccinated.

So why is the discussion around natural immunity considered potential misinformation? The Centers of Disease Control and Prevention has long recognized natural immunity in humans; it’s one of the reasons humanity has lasted so long. Our bodies have done an excellent job protecting themselves against foreign viruses and bacterias that could be harmful.

One may argue that natural immunity is being suppressed by public health officials and not discussed with us because they fear it will lead some people to choose to get infected rather than get vaccinated.

To create solutions for an unusual situation, it’s necessary to consider ideas coming from all public health sectors. But we should not be governed by these ideas. Otherwise, it feels like we are in an agenda-led scenario, where the interests of a select few are rolled out to the masses for profits, power and control.

Misinformation over COVID-19 is so prevalent that President Joe Biden accused platforms such as Facebook of “killing people” with falsehoods about the vaccine.

The White House turned up the pressure on social media platforms to battle vaccine misinformation in July. Press Secretary Jen Psaki said the White House has regularly contacted social media companies to raise concern over the latest narratives that are considered dangerous to public health and provide useful information that “may or may not be interesting” to viewers.

This is an example of government-controlled media, similar to other censored countries like China, North Korea and Cuba.

These actions by Big Tech set a precedent that only government-officiated information will be the only message that is accepted and communicated to the general public.

It wasn’t until May 2021 that Facebook stopped banning posts about the possibility that COVID-19 escaped from a lab. This comes more than a year after the idea was prematurely debunked.

I wonder how many content creators’ videos were removed and lost out on revenue because of this err on the side of caution?

We’re told to “follow the science.” But real science is a collective effort. It involves observing, asking questions, as well as community and intellectual debate.

Scientific ideas are subject to change because our world is ever-changing. The ultimate authority is the evidence, and we see the data changing continuously.

Shutting down community voices and vilifying their character will only lead to suppressing the next life-changing discovery. Let’s look at what history taught us when Galileo was convicted of heresy by the Catholic Church and spent the rest of his life under house arrest for believing the Earth revolves around the sun.

Most importantly, science is not authoritarian nor dogmatic.

I get it. Some people think swift and aggressive measures are the only way to stop misinformation, ease the spread of the virus and encourage people to get vaccinated through any means necessary, such as stripping one’s rights into a totalitarian government.

But how do we know that we’re going about it the right way? Misinformation is a subjective concept and can vary depending on a person’s background, personal interest, and political and cultural influences.

It begins with COVID-19, then escalates to climate change and before you know it, Big Tech will censor government dissent if the White House tells them so. Similar to when the U.S. government imposed harsh penalties on anyone found guilty of speaking out against the government, the flag or the Armed Forces in 1918 through the Sedition Act. Where does it end?

Former New York Times opinion editor Bari Weiss said it best: “How have we accepted a reality in which Big Tech can carry out the digital equivalent of book burnings? And why is it that so few people are speaking up against the status quo?”

Anyone who has paid attention to history knows this is a slippery slope for us to be standing on.