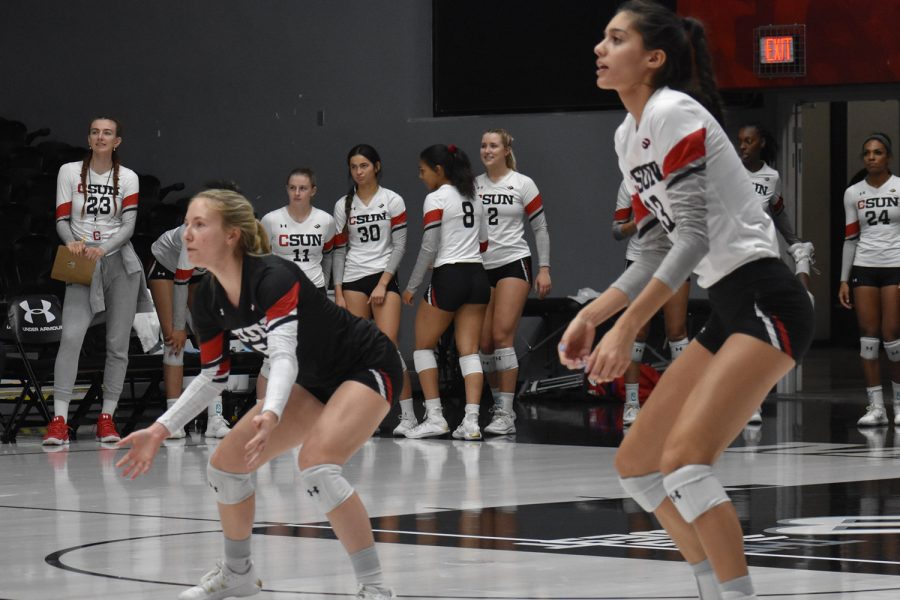 Makayla Bradford, left, and Lexi McLeod get in position to receive the ball against UC Riverside in Northridge, Calif., on Nov. 19, 2021.

CSUN women’s volleyball has had bad luck against University of California, Riverside. UCR has beaten them three straight meetings, but CSUN was able to snap it by winning 3-1 on Friday.

The Matadors outscored the Highlanders by a total of 15 points over the four sets and doubled UCR’s blocks with six.

It was a strong performance for outside hitter Taylor Orshoff who accumulated 17 points coming from 16 kills and two assisted blocks. Orshoff led the team in points.

Though UCR didn’t win, Highlanders outside hitter Amarachi Osuji led both teams with 20 points coming from 17 kills, two service aces and a blocked shot. The next closest Highlander teammate was outside hitter Deja Bickers with 13 total points.

CSUN outside hitter Nicole Nevarez had a strong performance collecting 14 kills to finish with 15 points. During the first set, the Matadors went on a 7-1 run. With a little assistance, Nevarez pushed it to an 8-1 run when she ferociously spiked the ball into the ground.

CSUN’s middle blocker’s Lauryn Anderson and Taylor Hunter, and outside hitter Lexi McLeod had solid performances as well. Each of them had nine kills.

In the second set, McLeod, Nevarez and Anderson came up clutch for the Matadors in the second set. CSUN trailed 23-21, but McLeod had two kills in a row to tie the game.
This was followed by a Highlander point, but Anderson got a kill to knot the game up at 24 apiece. Nevarez would score the final two points of the set with kills.

CSUN libero Makayla Bradford had an impressive save. After tripping over her teammate, Bradford found herself on the ground with the ball headed right for her. Bradford was able to set the ball up for a kill by Nevarez.

In the fourth set, Anderson found herself in the middle of a strange play when the ball went over the net and bounced off of her face going back over the net. This caused an attack error by Osuji and extended the Matadors’ lead, 10-8. CSUN won the fourth and final set of the match 25-20 led by Anderson’s four points and nine errors by UCR.

CSUN had suffered three difficult losses, but came out of the gates fast in the match against UCR. Even when the team was trailing, the Matadors seemed to always smile and pick each other up.

“It speaks volumes, if they are confident in each other that’s gonna help us win the match,” Terussa said. “ [Confidence] is what they need to be, they need to understand that it is not a one person team, they need each other in order to play well.”

The Matadors look to keep the momentum going as they face University of California, Davis Saturday night at the Matadome.