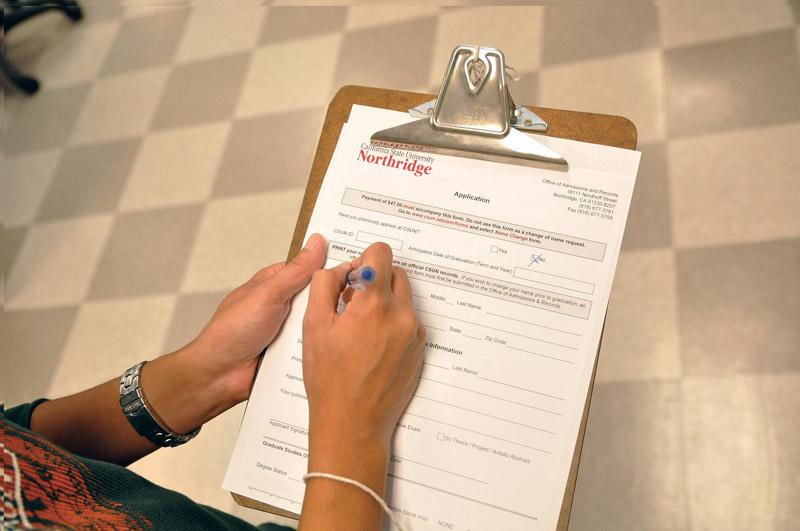 Nov. 30 is the application deadline for first-time freshmen and transfer students who wish to attend CSUN in the fall of 2010.

The deadlines have been moved up recently with the idea that fewer students will apply.

“The theory behind it is, if you make the deadline earlier, some students will miss the deadline, thereby we will actually decrease the number of students who will come to the university next fall,” said Cynthia Rawitch, associate vice president of Undergraduate Studies.

The university wants fewer students enrolled because that is what is mandated from the Chancellor’s Office.

“It is quite clear, while there will be fewer students here in the fall, all things being equal and this worked, there will also be fewer classes that are offered,” Rawitch said.

“From everything I understand and from the state of the economy, our belief and assumption next year will be much worse, in terms of the availability of classes,” Rawitch said.

Many students thought this semester was difficult, but next year will be even worse, especially for transfer students and students taking 300-level classes, Rawitch said.

First-time freshmen and graduating seniors would be the least impacted, she added.

For transfer students, the deadline did not only advance, but this is the first year where they have had to complete all classes needed to transfer by the end of the spring semester, Rawitch said.

In previous years, transfer students had the possibility of finishing their basic classes during the summer if they needed the extra semester. But for first-time freshmen the requirements became more strict.

“We are requiring that they take their ELM (Entry-Level Mathematics exam) and EPT (English Placement Test) no later than mid-June. You have to also get into the computer system and click on the intent to register no later than May 1,” Rawitch said.

With these changes, the university expected to see fewer applications, but that is not the case so far.

Admissions and Records doesn’t know if this pace will continue for the application entries. As long as a student gets their application in and meets all the requirements, then they get in, Rawitch said.

High school students and even transfer students are being informed of all these changes.

The reactions have not all been negative.

Javier Hernendez, director of CSUN’s Student Outreach and Recruitment Services, has been working with high schools near CSUN making sure they know what they need to do.

“Students are now more concerned whether they are going to get into the university, not the deadline,” Hernandez said.

“They are scared there will be no space,” Hernandez said.

The outreach programs are currently focusing more on the underclassman rather than the senior classes. They also want to reach more to transfer students.

“The budget will get better in the next two to three years, we will focus on the students who will be seniors then,” Hernandez said.

Those students are the freshmen, sophomore, and juniors. As the outreach programs talk to seniors, they are also opening communication with other students as well.