Matadors hold on to beat Vikings in a nail-biter 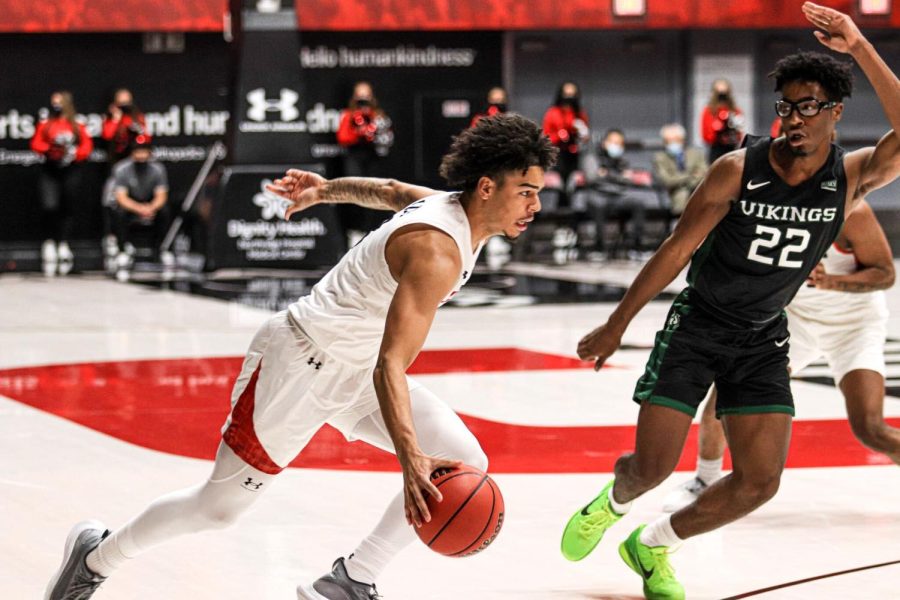 Saturday night hoops was what you expect it to be: drama filled and entertaining at the same time. CSUN’s men’s basketball team snapped a three-game losing streak with a 69-66 win against Portland State, improving their record to 4-6 on the season.

“Yeah, it was a big win, you know coming off three losses,” said CSUN guard Atin Wright after the game. “We had to get some fight, we have the conference season that starts on the 30th so we had to get ready to go into the conference with a good attitude and some wins.”

Wright finished the game with a career-high 28 points, but his effort on the defensive side was major, especially during the final seconds. The Vikings snuck back into the game in the second half, despite being down 15 with 10 minutes left in the game.

The first half was dominated by the Matadors in most areas for a long period of time. On the defensive side they forced the Vikings to commit 14 turnovers, six of which were steals by numerous CSUN players.

“Our guys are getting better at understanding the scouting reports, the team’s strengths and weaknesses, and how to take certain guys away,” said CSUN head coach Trent Johnson.

It wasn’t until the second half of the game where CSUN started to distance themselves from the Vikings. Portland State applied a full-court press on the Matadors throughout the second half, which helped them close the gap. Because of the defensive switch, the Vikings found themselves with a 66-64 lead with 1:46 left in the game.

As the game progressed, the ending minutes were a cinematic masterpiece for the Matadors. The supporting cast was able to deliver a solid contribution.

CSUN guard Brendan Harrick delivered in a major way, grabbing a career-high nine rebounds while going 3-for-5 from beyond the arc. Most of Harrick’s 16 points came in the second half, which was monumental for the squad.

CSUN guard Elijah Hardy contributed by knocking down two free throws in the final seconds of the game to extend the Matadors lead to 66-69, but the Vikings still had a chance to tie it.

Portland State guard Michael Carter III dribbled the ball up and shot an uncontested 3-pointer to tie the game, but wasn’t able to connect.

CSUN looks to build on this win Wednesday against Bethesda University before starting conference play Dec. 30 at UC Irvine.