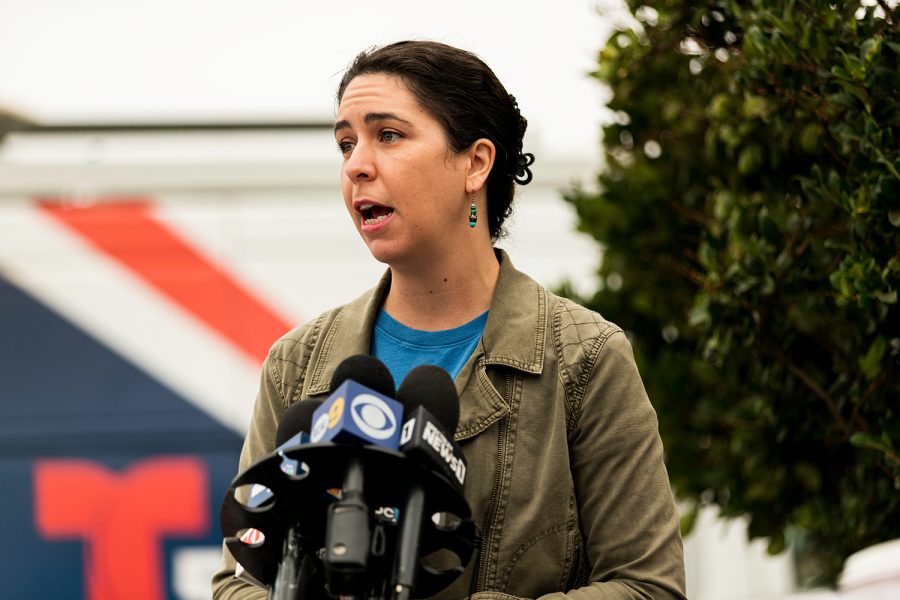 Alexandra Nagy, the California director of Food and Water Watch, addresses the media during the "Rally to Shut Aliso Down" protest in Porter Ranch, Calif., on Tuesday, Sept. 28, 2021. "People are very concerned about the low settlement amount," Nagy said. "They don't think it will be enough to cover all their health costs. Also it does not shut down Aliso Canyon [gas storage facility] and that is our goal."

Alexandra Nagy is the California director of Food and Water Watch, an organization that fights for protection of people and the environment from large corporations. Nagy began working for the organization nine years ago after the Aliso Canyon Gas storage facility had a gas blowout in 2015. The Sundial sat down with Nagy to discuss the issues we face with sustainability today as corporations continue to often exhaust our resources.
Q: How do oil drilling, fracking and fossil fuels contribute to climate change and affect people’s daily lives?
A: Fossil fuel extraction in itself is a very energy-intensive process and the types of gases that are released from just doing extraction contributes to the warming of our overall atmosphere. Whether that’s carbon dioxide or methane, which is a huge climate warming accelerant, those are two issues right there. But then when you talk about transporting, refining and ultimately burning fuels, the whole lifecycle is very harmful to our climate. It releases a lot of greenhouse gases and emissions that are both harmful for our climate, but also poisonous to our communities.

So even at the extraction point, whether you’re fracking for oil or gas, people who live near these types of sites are getting sick and it is poisoning clean water to extract this stuff, and then threatens groundwater. It’s an environmental issue with how it harms our natural environment and our water, but it’s also a public health issue because the people who live closest to these types of facilities really bear the burden of the health costs that they have to suffer, so that everybody else can turn on their lights, for example. So it really does affect people’s daily lives if you have to live next to a very noisy and fuming oil drill site. Those people really are the sacrifices in our society and often are intentionally Black, brown and Asian American and Pacific Islander communities. These are groups of people who have intentionally been segregated into these fossil fuel corridors or industry intensive areas. It’s very much an issue of environmental racism and especially in California.
Q: How can college students get involved with fighting climate change?
A: It’s about getting involved with a group on campus or out in the real world that is trying to change policy at a city, local or even state level. I really do think that when we have people engaging and changing the system, that’s where we see the most effect. It’s very difficult for people to make certain lifestyle choices when the entire system has been set up by the fossil fuel industry to force us into these tiny boxes where our personal options are the most convenient, but also harming the environment. It’s all by design and it’s very difficult to break out of those types of systems unless we’re organizing the people power and the mass movements we need to change those systems of power. Students who want to get involved really need to look around to see how they can shift the status quo around them and kind of figure out what the best pathways are for making that political change.
Q: To many, climate change feels like something that’s far away in the future. What do you say to convince people that climate change is something that needs to be urgently addressed and acted upon?
A: I would say, if you haven’t already been affected, you’re next.The reality is everyone has been affected one way or another. Whether you personally have or you know someone personally, who has been affected by climate change. There was a report that came out just last month in the Washington Post that said, one in three Americans experienced a weather disaster this summer. We already are seeing the extremes, the storms, fires, hurricanes, coastal storms, floods threatening millions of Americans. We’re seeing dry areas 200% drier, wet areas 200% wetter, and these are having a devastating impact already. If you have not been personally affected, like someone you know definitely has. It’s now. So what I would say to these people is be ready. But also know that these moments of disaster are the best moments for change. Just like what we’ve seen with the Huntington Beach oil spill. Never before have I seen so many elected officials say we need to ban offshore drilling. There’s really a chorus of people saying that now. I think times have changed so much because climate change elevated and it has already affected so many people that the appetite for these types of big, system changes in our society are there because we realize what’s at stake now. We have experience with just what can go wrong and it’s scary, but we do need to focus on making political change happen. We all are going to be extra touched by this and we need to fight to make sure that California or wherever we live remains a livable place for the future that we can have access to clean drinking water, have air to breathe, and have good clean food. All of these systems are a threat right now. I just encourage people to look around, get ready, and be ready to organize.