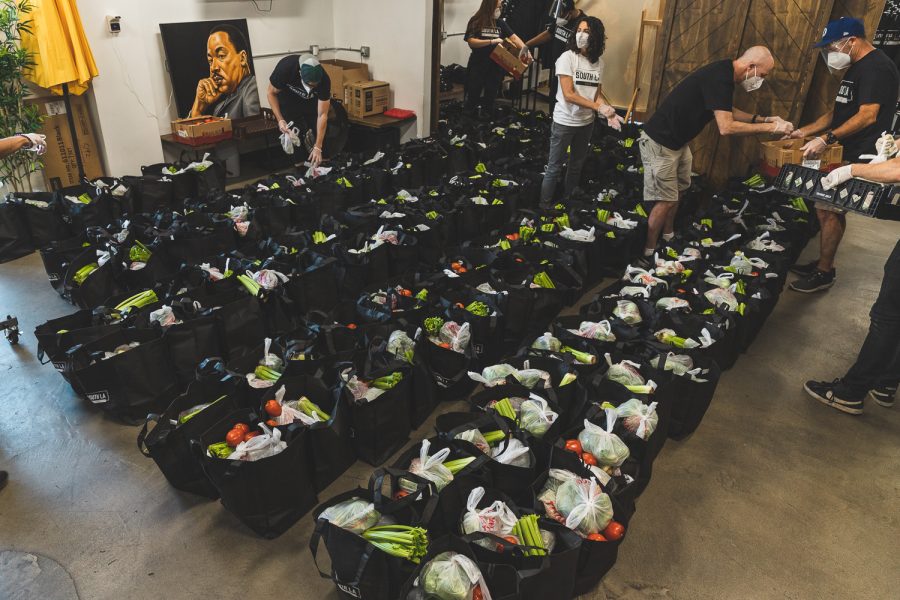 Volunteers put fresh produce into individual grocery bags that will be handed out to the community of South L.A. during South LA Cafe's weekly food drive in South Los Angeles, Calif., on March 31, 2021.

Imagine you are one of eight people attending a dinner, yet there are only seven seats at the table. Someone is going home without eating. For the one in eight people in the U.S. and one in five Angelenos who struggle with food insecurity, every day can feel like that.

Fast food chains, liquor stores and smoke shops line the streets of South Central Los Angeles, with a lack of grocery markets that one would typically see in suburban areas of the city.

A common problem South Central residents experience is the distance they would need to travel in order to have access to fresh produce. This can pose difficulties for an area where 113 of 908 total households are without vehicles that are more than one-half mile from a supermarket.

The lack of access to healthy food options contributed to the food insecurity in this area of Los Angeles, a trend that has only become worse through the years.

During the COVID-19 pandemic, an estimated one in four households is food insecure, according to the Los Angeles Regional Food Bank, an organization that fights hunger in their community by raising awareness through hunger education and public policies in hunger assistance.

“There is a stigma that only homeless people access food resources,” according to Roger Castle, the chief development officer of LARFB. “Seniors, people with disabilities and low-income families are the most visible examples of those who struggle with food insecurity. The fight doesn’t end there; food insecurity affects all groups of people regardless of employment status or ethnicity.”

One of the leading health concerns in Los Angeles is obesity, which can be traced back to the inaccessibility of healthy food. With a variety of fast food chains and convenience stores to choose from, the processed and unnatural foods found there have become the first choice in many families’ diets. As a result, the rates of obesity, diabetes, and heart disease are spiking in these areas.

Although there is no official explanation as to why supermarkets aren’t available in areas like South Central, they often avoid low-income areas for several reasons. Supermarkets anticipate where to open new locations based on income, crime rates and ease of transportation.

Amid the crowded streets stands South L.A. Cafe, whose walls read, “Coffee. Community. Connection.” The cafe, owned by Joe and Celia Ward-Wallace, is contributing to the fight against food insecurity in South Central.

“It was never about us, it was always about the community,” Joe said. “Everyone knows that this is a place for them.”

Joe, a South Central native, had a dream one night that sparked the idea of South L.A.’s grocery box and after telling his partner Celia, they brought it to life.

“People who don’t live in communities like ours are unaware of these issues because it’s just nothing that they deal with. How would they know?” Celia said.

In 2013, the Ralph’s supermarket on the corner of Martin Luther King Jr. Boulevard and Western Avenue closed their doors, and CVS took over the building where it once stood. Fighting for his community, Joe was assured by CVS there would be a produce section. When CVS opened they had a produce section which was three tables long, according to Joe.

“I mean that’s just a major slap in our faces, and that only lasted a couple of weeks,” Joe said, “That’s what they’re doing to communities like this.”

On Wednesday afternoons, Joe, Celia and multiple volunteers make 200 grocery bags that are provided by donations from voluntary sponsors and donors, which feed families in the South L.A. community.

Volunteers help gather and pack the groceries into bags one to two days prior to the giveaway so the process flows smoothly. Each week they provide households with fresh vegetables, grains, proteins, fruits and dairy products.

Ward-Wallace interacts with volunteers and community members with warm greetings and small check-ins down the line to create a loving environment for those who come. There is also a curbside pickup, where volunteers pack the cars with groceries.

When the production line is efficient with packing the bags, volunteers are able to move families out in roughly 30 minutes by the time they’ve handed out a wristband per family.

If there are any grocery bags left, South L.A. Cafe leaves no food for waste — they distribute the leftover bags to neighboring storefronts. Through these food drives in the heart of South Central, the South L.A. Cafe team and their efforts are decreasing the need for locals to travel far for groceries.

“Opening this place meant freedom — it meant ‘Why do I have to go to the other side of town to have something nice? It shouldn’t be like that,’” Joe said.

The Ward-Wallace’s emphasize the importance of having community and bringing a positive environment in South Central through their business and through the people that they train to work there for them.

Through food drives and education on making better choices, they are being their community’s solution to food insecurity.