Matadors clean up the beach in wipeout victory 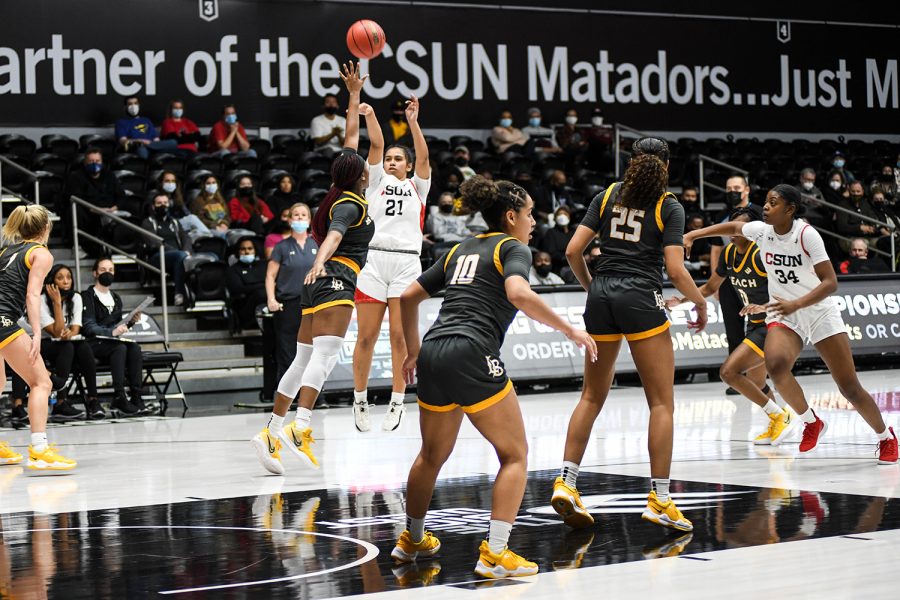 Anaiyah Tu'ua (21) shoots for the basket as Long Beach State plays defense at CSUN's The Matadome on Jan. 15, 2022, in Northridge, Calif.

The Matadors were able to bounce back from a loss on Thursday to Cal State Fullerton. CSUN improves their overall record to 6-7, and have a 2-1 conference record.

A very solid team performance was led by CSUN forward Tess Amundsen, who had a double-double with 12 points and 12 rebounds. She also hit three of her four 3-point shots, the same amount of 3-pointers that CSULB made as a team.

“She’s a blue collar player, we have to have her play multiple positions,” said interim head coach Carlene Mitchell. “Her versatility, work ethic and competitive spirit you just can’t put a price on that.”

Mitchell also spoke about how the two teams were matched well with one another due to neither team playing a true center, which allowed for easier switches while playing man-to-man. Mitchell also said the players bought into the game plan and stayed locked in defensively.

“It feels so good,” said Amundsen on the win. “It’s a big win for us and it just shows how good we can be and the level that we are able to play at. We never give up.”

In the second quarter, the Matadors allowed the Beach to only score six points, which was spearheaded by freshman guard Sydney Woodley. In the first half Woodley had five steals and eight points, and ended with seven steals for the game.

Woodley continued to add to her stat bag, as she collected seven steals in Thursday’s loss against CSUF. Woodley is currently ranked second in the Big West Conference and 26th in the NCAA for steals this season.

“[Woodley] changes the game with her defensive presence,” said Mitchell. “She’s critical for what we’re doing now and in our future plans.”

Amundsen spoke about Woodley’s game, saying that the team expects that type of performance out of her and now it should be a given.

Other than turnovers, the Matadors led in most major statistical categories, including assists, steals, rebounds, bench points, and even outscored the Beach 19-10 on points off turnovers. CSULB forward Maddi Utti has had a really strong season, averaging 12.7 points, 8.5 rebounds, 3.5 assists and 3.5 steals a game.

Utti scored 17 points and grabbed 13 rebounds, but her effort wasn’t enough to pull her team close to the Matadors. After a buzzer-beater by CSUN guard Ashley Hawkins to end the first quarter, CSUN was able to keep the momentum by only allowing the Beach to get to within 10 points in the third quarter. CSUN was able to run away with the lead and win in the fourth.

The Matadors have a three-game road trip that starts Thursday against UC Riverside and ends Jan 25 against UC Santa Barbara.