Women can do it better: Carleen Quirino, owner of Queens of Needles 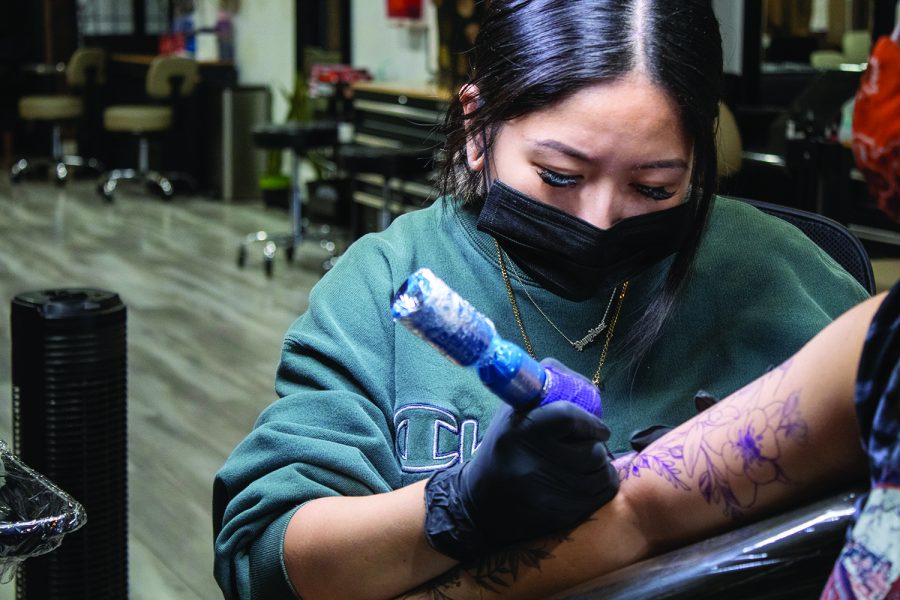 Charleen Quirino was once told that she was not good enough to be a tattoo artist. She can remember a time when people doubted her skills.

“I had a homie that I was tattooing in the very beginning — I didn’t finish the tattoo because maybe I just couldn’t grasp the concept of the tattoo whatever it was. His friend said, ‘Well that’s why you never should’ve let a girl do it,’” Quirino said.

During a brief stint at a tattoo shop where there were mostly men, Quirino felt that she was always being judged about her abilities. This took a toll on her self-esteem.

Quirino became a tattoo artist seven years ago, despite people telling her she shouldn’t go into a male-dominated business. Out of over 7000 tattoo artists in the U.S., only 25% of them are women, according to Zippia, a career resource site.

Quirino believes that she has beaten the odds and is doing everything others told her she couldn’t. That drive also led her to open Queens of Needles, a female-run tattoo shop located on Reseda Boulevard.

“I’ve always wanted to have and create a community of women empowerment,” Quirino said.

Her competitive drive began when she was young. She felt like the only girl at her elementary school who would rather play kickball than hang out with other girls during lunch.

She didn’t just want to play with the boys — she wanted to be better than them.

“I’ve always wanted to do that and to prove them wrong, like no — [women] could do it better,” Quirino said.

Quirino had role models. She said that she was inspired by an older generation that started the female tattoo artist movement.

One of her role models is Whang-Od Oggay, a 104-year-old Filipina tattoo artist from the village of Buscalan in Kalinga, Philippines. She is the oldest practitioner of Kalinga tattooing, a style of tattooing done by the indigenious Kalinga people. Scholars believe that the style is over a thousand years old, according to Lars Krutak, an American anthropologist.

Traditionally, only men were allowed to learn the artform. Whang-Od broke the tradition when she learned how to tattoo from her father. Currently, her grandnieces Gracia Palicas and Elyang Wigan are learning the tradition from her.

Quirino first began tattooing because of a girl she met through a Facebook Market meetup. She visited the girl’s home for a piercing and the girl told her that she should learn how to tattoo.

“I tattooed her and I had a great feeling about the outcome of the tattoo and I liked it,” Quirino said.

Beginner tattoo artists typically apprentice under an experienced tattoo artist. However, Quirino did not. She started off by tattooing her friends and family in her apartment. Quirino also found that the skills she got from doing graffiti helped her pick up tattoo outlining quickly.

Today, Quirino tattoos customers at Queens of Needles, which has seven female tattoo artists and a body piercer.

Lery Jane Torres is one of the artists. She likes working in an all-female shop because it gave her confidence after joining 10 months ago. Torres, a member of the LGBTQIA+ community, said the shop provides a diverse working environment and a place where artists can work collaboratively.

“Queens of Needles is a safe place for me and my clients,” Torres said. “I know that here we are all welcome, we are diverse and I know I am accepted. No such competition but our very own selves. I’m confident that we are pretty different from other shops.”

Samantha Garcia, a San Fernando Valley resident, has several tattoos from Queens of Needles. She was anxious about going to a tattoo shop, but visiting Queens of Needles made her comfortable.

“[Quirino] was kind of like a therapist, I definitely appreciate that. Especially when you go into a tattoo shop it’s all very intimidating, you see all these men, and all this masculinity and going into the feminine Queen of Needles, it’s just full of women empowerment,” Garcia said. “It just felt super comfortable and I think that was the best part of everything. No one was judging you.”

With Queens of Needles’ first year anniversary coming up in December, Quirino set goals for the future: for her shop to go worldwide, inspire other women to start their own business and encourage women to go into tattooing.

“Women empower all over the world but I wanted to start first in the San Fernando Valley and also create footsteps for the future generation of females,” Quirino said.