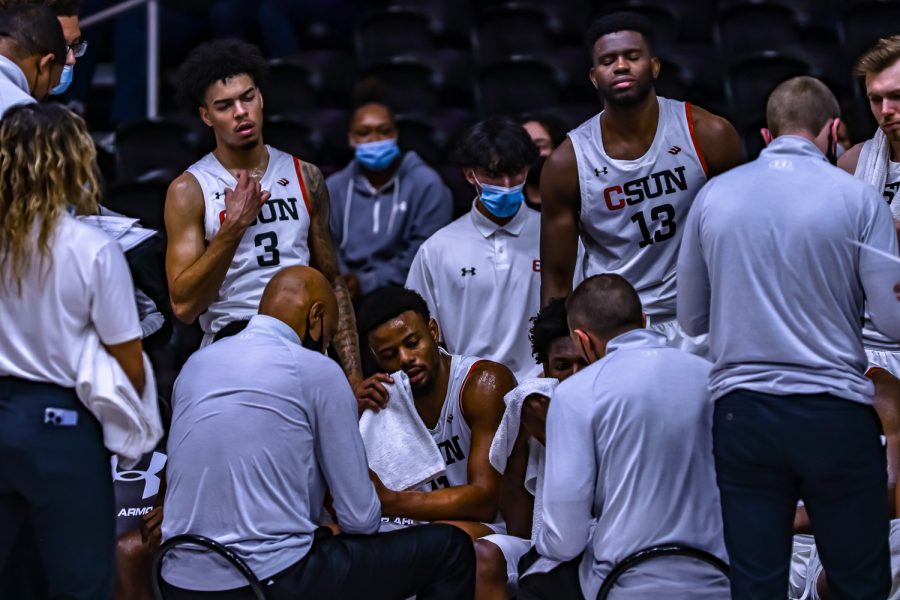 CSUN men's basketball coach Trent Johnson calls for a timeout and works out a game plan against UC Riverside. With a significant gap in the score, the team is exhausted from running defense against UC Riverside on Saturday, Jan. 22, 2022, in Northridge, Calif.

It’s been a rough start to the season for CSUN men’s basketball. CSUN (5-12, 1-4 Big West Conference) had high hopes going into conference play, but as of late they are riding on the coattails of a four-game losing streak. This surpasses their longest losing streak of the season.

CSUN was no match for UC Riverside (10-5, 3-1), losing 77-67. The Highlanders extended their winning streak to three and continued to show a presence in the Big West.

Just like their season so far, CSUN started the game off slow. The Matadors remained scoreless for the first five minutes of the game, which allowed the Highlanders to score 11 unanswered points.

The scoring drought ended after CSUN guard Atin Wright scored the first of his team-high 19 points to make the score 11-2. The Matadors tried digging themselves out of the hole with a 7-0 run that brought them within five points.

That would ultimately not be enough for the Matadors as the Highlanders continued to put up points in the first half. UCR led by as many as 20 points and went into the half leading 48-30.

The Matadors had trouble taking care of the ball in the first half by having eight turnovers resulting in 15 Highlander points. Guarding the 3-point line also proved to be ineffectual for the Matadors as UCR scored 27 of their 48 points from 3-point range.

While things were going south, CSUN forward Fidelis Okereke believed that there was still a lot to fight for. Okereke had the hot hand, scoring three straight baskets to chip away the 20-point deficit to a 10-point game with less than eight minutes left.

“We don’t really lose until the clock hits zero,” said Okereke. “Unfortunately, we didn’t get the win that we wanted. We’re going to work together as a team and build our chemistry. We got so many guys out that it’s messing us up, but that’s not an excuse for what happened tonight.”

The momentum shifted back towards the Highlanders when a 3-pointer from UCR guard Wil Tattersall secured a career-high 22 points, shooting 9-11 from the field.

The Matadors continued to show fight, bringing the score to 71-59 with four minutes remaining, but the Highlanders would hold on to the lead and take the win on the road.

CSUN looks to snap their four-game losing streak at home against UC Santa Barbara (7-7, 0-2) on Tuesday before going on the road to take on Hawaii (9-5, 5-0), who are on a five-game winning streak.