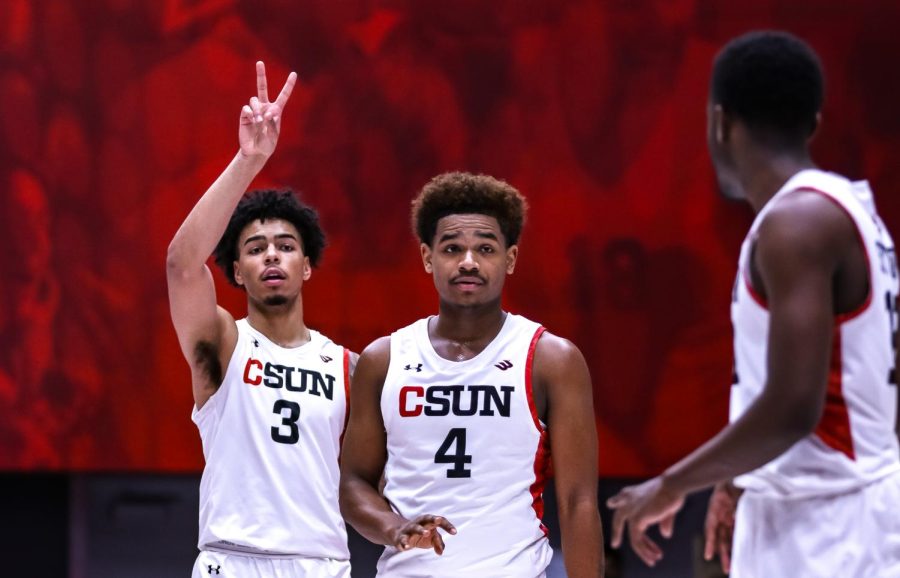 Kailen Rains (3) and Atin Wright (4) signal to their teammates for their next play during the game against UC Riverside on Jan. 22, 2022, in Northridge, Calif.

CSUN men’s basketball searched but couldn’t find a solution to stop the four-game losing streak they’ve been on since Jan. 13. The Matadors looked to do that against UC Santa Barbara, but were outmatched in the second half.  In doing so CSUN extended its losing streak to five games, marking its longest of the season. Their last win, and only conference victory, came Jan. 8 against Cal Poly.

The Matadors were not able to execute offensively, shooting just 30% from the field on 50 shot attempts, roughly 9% under their season average.

CSUN (5-13, 1-5 Big West Conference) played a decent first half but couldn’t hold on in the second half, where UCSB (8-7, 1-2) ran away with the game for a 72-45 victory. Beating the Matadors got the Gauchos back in the win column for the first time since Dec. 22, when they defeated Idaho State. This is largely because five of their last eight games were cancelled due to COVID-19 protocols.

CSUN being on a five-game losing streak isn’t without reason, as the Matadors have had nine of their scholarship players miss a chunk of the season.

“We have had nine scholarship guys miss a total of 43 games so our offense doesn’t have much rhythm,” said interim head coach Trent Johnson. “This means you got some guys out here that are being put in situations where they’re not accustomed to.”

The Matadors continued the trend of getting off to a slow start by letting UCSB score seven unanswered points and starting the game on a 14-4 run. CSUN had to play catch-up once again and was never able to crawl out of the deficit.

In the first half the Matadors were able to keep the game in reach due to CSUN guard Elijah Hardy hitting back-to-back threes and forward Fidelis Okereke’s game-high 12 rebounds.

The catalyst for the Matadors’ struggles defensively was UCSB forward Miles Norris, who started the first half going 4-4 from three while scoring 16 points. Norris looked invincible from the 3-point line as he continued his first half performance by going 5-6 from beyond the arc in the second half, ending 9-10 for the game and scoring 31 points.

“The things that are magnifying to us are you play a good half, you execute and do what you’re supposed to do and compete your tail off,” said Johnson. “Then you start the second half with breakdowns defensively. A guy who has 16 [points] already and you give him two threes wide open.”

CSUN opened halftime down 34-32, but scored only two points in the first 10 minutes of the second half, which allowed the Gauchos to go on a 16-2 run. Although CSUN couldn’t get anything going offensively, they were able to get eight steals, force 19 turnovers and dominate second-chance points.

“We have to find a way to play two good halves of basketball and stay competitive,” said Johnson. “Control the things that we can control.”

Johnson explained that in order to do so they can’t have breakdowns defensively; they have to rebound, box out, and take care of the ball; and execute as a whole offensively.

The Matadors play a physical brand of basketball which gets them to the free-throw line. While they usually have their way with making free throws, in this case things weren’t clicking on that end as well.

Okereke has been in a slump from the free-throw line, going 0-3 Saturday against UC Riverside and 1-6 tonight.

“Usually when you get to the free-throw line that means you’re getting good shots so that’s because of our scheme,” said Johnson. “Shots don’t go down, it’s a coaches responsibility to put guys in a situation where they can score so that’s a confidence thing and that’s a thing in which I call recruiting.”

The Matadors fly to Hawaii (9-5, 4-0) to face the hottest team in the conference, who are coming off a Jan. 11 win against Cal Poly that extended their winning streak to five games.