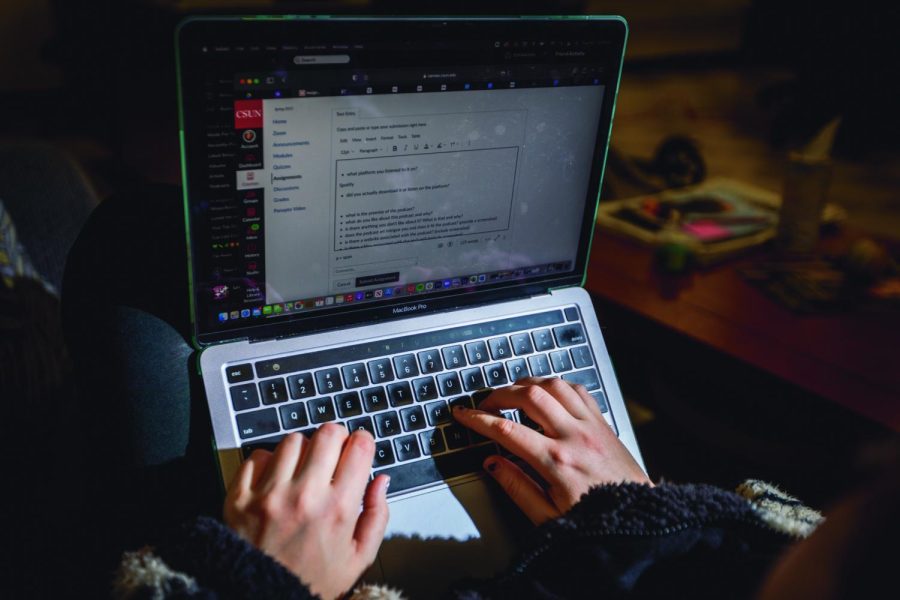 Although most of CSUN’s in-person classes for spring were scheduled to start online for the first three weeks of the semester, exemptions were granted to classes from four of the university’s nine colleges.

“It was being planned ahead of time and the administration was absolutely looking at the trajectory of Omicron transmission,” Adams said. “They’re also in touch with the other Cal State University campuses in Los Angeles, so that we could know what they were doing and make sure that we were relatively consistent.”

“We found it out when you found it out,” Bowen said. “Actually, we’ve been anticipating that there was going to be something.”

Bowen added, “I wasn’t surprised on one hand, but it was a little challenging, because we weren’t going in that direction. We had already scheduled about 80% of our classes in person, and only about 20% of them, give or take, were fully online.”

Classes at CSUN that were granted an exemption to this delay included those from the Mike Curb College of Arts, Media, and Communication; the College of Engineering and Computer Science; the College of Health and Human Development; and the College of Science and Mathematics.

An exemption was also given to the VITA program from the David Nazarian College of Business and Economics.

Adams noted that the school’s administration and departments consulted with each other to find the best course of action when considering which classes would be allowed to start the semester in person. “The departments and programs absolutely had input,” Adams said.

After the administration found out that these four colleges had critical practicum classes, Adams explained how the process moved forward from there.

“If those classes were going to get really thrown off by not being able to meet on campus, then the deans and department chairs could consult with the faculty, make a decision about the best choice and then let the students know that they were going to meet [in person] those first three weeks,” Adams said.

Although only four colleges were granted an exemption to meet in person, interim Vice Provost Matthew Cahn noted that the conversation among administration and staff involved members from all of CSUN’s nine colleges.

“That decision wasn’t based on ‘Oh, those four colleges are more activities oriented, so only they can do it,’” Cahn said. “It really was a conversation among departments and deans and then across the university to see what made sense.”

Cahn also stated that the administration’s decision to start in-person classes remotely for the first three weeks was not done over a matter of safety, but out of an overabundance of caution.

“We believe that the campus is safe right now,” Cahn said. “The desire to retain most classes online for a period of time isn’t to say we think campus is unsafe, but we recognize things are unstable and scary and that we are safer to the degree that we reduce the campus population for a few weeks to let the surge pass.”

In a conversation over email, interim Dean of the College of Health and Human Development Mechelle Best talked about the significance of having the exemption to meet in person for the first three weeks of the semester.

“These classes were approved because of their hands-on components that cannot be experienced online,” Best said. “Offering them in-person from the beginning of the semester allows students to attain needed skills throughout the course of the semester without delay.”

Also over email, biology department Chair Steven Dudgeon explained the inability to replicate “hands-on skill development and training” that is afforded with an in-person setting.

“Beyond biology and throughout the university, the essential benefit of teaching in-person as opposed to remotely through Zoom is the immediate human connection and interaction between people in a classroom,” Dudgeon said.

“Many students’ future careers beyond CSUN require letters of recommendation by faculty,” Dudgeon said. “A hidden casualty of the COVID era is that the lack of in-person classes has severely compromised faculty getting to know their students well.”

In-person classes are scheduled to begin on campus on Feb. 12 for weekend classes and Feb. 14 for weekday classes.