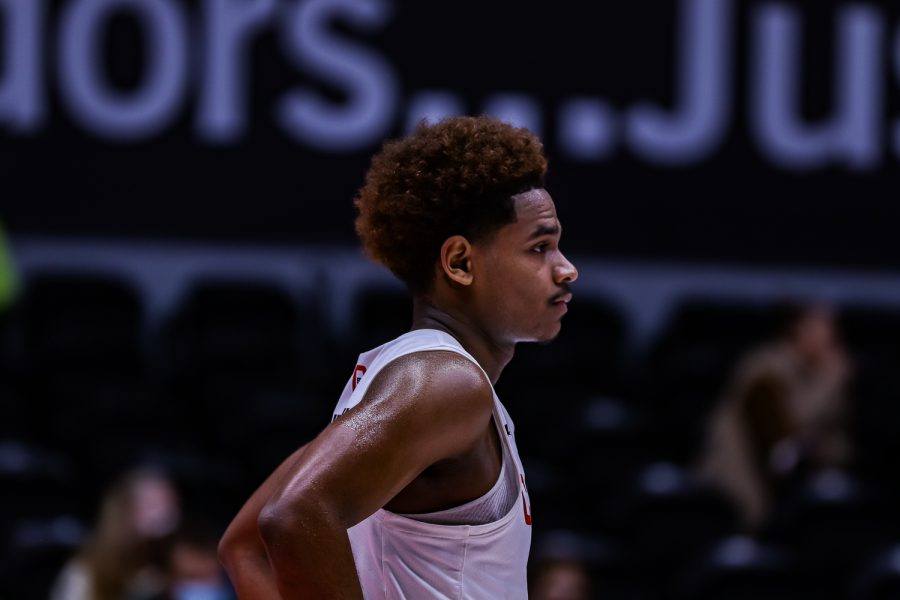 CSUN sophomore guard Atin Wright looks on during a game against UC Riverside on Jan. 22, 2022, at The Matadome in Northridge, Calif.

CSUN men’s basketball team has had a rough start to the 2022 season, going 1-7 in the month of January.

The Matadors (5-15, 1-6 Big West Conference) are currently tied for second to last place in the Big West. CSUN has yet to be at full strength this season due to injuries. The Matadors are currently on a seven-game losing streak, their longest of the season. Five of those losses were double-digit defeats.

CSUN’s last victory was Jan. 8 against Cal Poly, when they soundly defeated the Mustangs 68-55 by outscoring them by 14 in the second half.

The team has had nine scholarship players miss a total of 46 games, including senior guard Darius Brown II, who has been out since Dec. 4.

“Darius Brown II is the head of the snake,” said interim head coach Trent Johnson. “[He] was All-League last year, is your best ball handler, and the third-leading scorer [on the team]. He’s missed 12 games, and out of those 12 games five of them we were in a situation to go ahead and win.”

Injuries up and down the roster have resulted in players that were lower on the rotation being thrown into a larger role, including sophomore guard Kailen Rains. In his freshman year Rains played a total of 15 minutes over a four-game span. Now Rains is being asked to play three different positions while averaging 18 minutes per game.

“Everybody has the opportunity to get better and continue to keep our foot on the pedal. We’re not giving up,” said senior guard Elijah Hardy. “Our mentality is to go in there and win some games, and play together and show people what we actually can do.”

Hardy has stepped it up big time this season, averaging career highs in points, assists and rebounds in his first season with the team. The Portland State transfer leads the team in 3-pointers made, while shooting 35% from beyond the arc.

Hardy said his mentality has never changed — he wants to keep attacking no matter how things are going on the scoreboard. He said as long as the team stays committed to putting in the work, the good will outshine the bad sooner rather than later.

Johnson believes the mindset for his team is to take it one practice or game at a time, and not look too far into the future. He instead focused on his players continuing to strive to be the best student, athlete and person they can be.

CSUN is hoping to turn things around in the month of February, with nine games remaining until the Big West Basketball Championships.