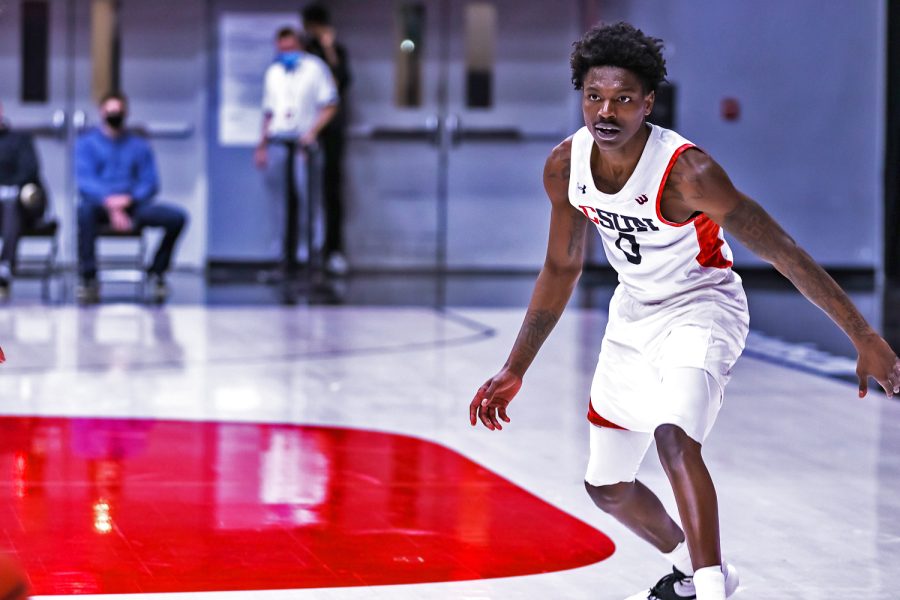 Elijah Hardy plays defense against UC Riverside on Jan. 22, 2022, at The Matadome in Northridge, Calif.

CSUN men’s basketball (5-15,1-6 Big West Conference) losing streak has been extended to seven after losing against UC San Diego (10-11, 4-6) on Thursday night. The Matadors rallied from 13 down, but ultimately lost 83-77.

CSUN reopened The Matadome to the general public this Thursday after being closed since Dec. 22 due to COVID-19 protocols. The arena was filled with noise thanks to the fans filling up the bleachers and the band finally being back.

“It felt better than being in an empty gym,” said CSUN guard Elijah Hardy. “We encourage all the CSUN students and fans to come out even more.”

The Matadors were close to taking the lead down the stretch and had momentum heading into the final minutes of the game, but they were unable to take the lead. UCSD found the holes in the defense and never let the Matadors pull ahead.

CSUN got off to a slow start, shooting 1-11 from the field while allowing the Tritons to jump out to a 10-2 lead. CSUN was able to gain some momentum after guard Atin Wright had a quick spin move in the paint, freeing himself for an easy layup. The move generated some oohs and aahs from the crowd and put the Matadors within five.

UCSD found success in the first half from beyond the 3-point arc by shooting 7-14, while CSUN shot just 2-9. The Matadors chipped away at UCSD’s lead to get it within four, but the Tritons went on an 8-2 run to close out the half leading 37-27.

The Tritons continued to shoot with success from 3-point range in the second half, making three 3-pointers in the first five minutes. However, CSUN guard Brendan Harrick kept the Matadors in the game by making three straight 3-pointers himself, making the score 54-46.

With just under four minutes left in the game, the Matadors closed the deficit to three as Hardy scored an acrobatic layup, adjusting his body in the air. The score was 65-64 after a pair of free throws by CSUN guard Darius Beane, bringing the Matadors close to their first lead of the game.

“It’s just the little details we have to focus on in crunch time,” Hardy said. “That’s something we continue to get better on. I don’t think anything specifically, or just one person, did anything wrong. But I think we just need to pay attention to detail.”

The Matadors comeback was stopped in its tracks after three straight scoreless possessions by CSUN. The Tritons took advantage of this, scoring eight straight points. UCSD went 12-12 at the free-throw line in the last two minutes and hung on for the win.

CSUN looks to snap this losing streak at home on Saturday against UC Irvine (9-7, 4-3).