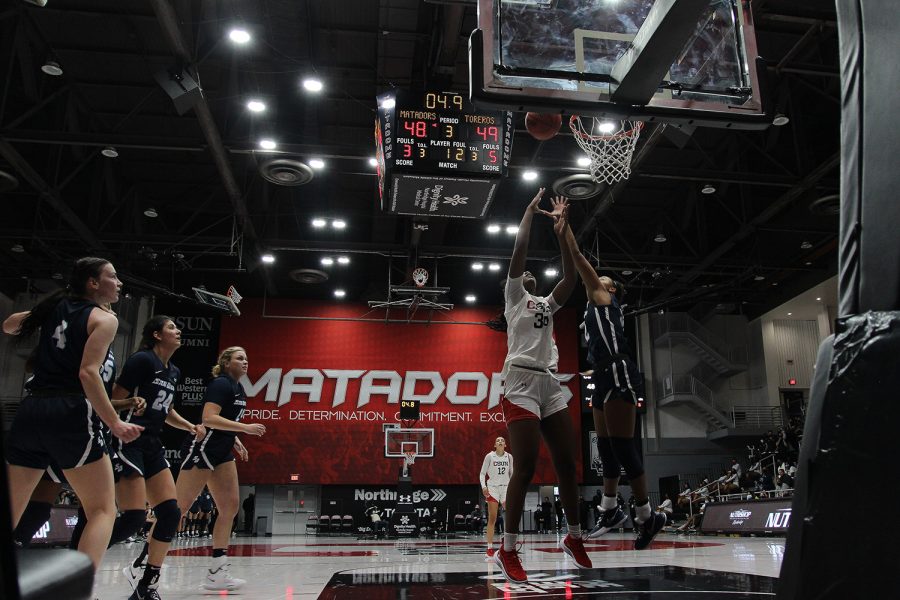 CSUN women's basketball plays against San Diego at The Matadome in Northridge, Calif., on Sunday, Dec. 5, 2021.

CSUN sports had tons of action this past week with showings from women’s and men’s basketball, women’s golf and tennis, and men’s volleyball.
Women’s Basketball
Women’s basketball started their week off with a win, traveling to UC San Diego and beating the Tritons 53-45. This win ended a four-game losing streak for the Matadors. The team was led by junior guard Jordyn Jackson who had 14 points, four steals, two rebounds and two assists. The Matadors were pests on the defensive end, stealing the ball 12 times and forcing 23 total turnovers.
The Matadors were unable to cap off the two-game road trip with a win, losing to UC Irvine 65-52. CSUN allowed UCI’s Chloe Webb and Jayde Cadee to score 20 points each and Kayla Williams to score 17. CSUN forward Tess Amundsen led the Matadors with 12 points.
Men’s Basketball
The men’s basketball team was unable to secure a win this week, losing both of their home games on Thursday and Saturday. The losses extend CSUN’s losing streak to seven.
The Matadors played UC San Diego on Thursday, Feb. 3, and never led in the game. CSUN was able to close the gap to single digits, but was unable to get anything going towards the end as they lost 83-77.

In CSUN’s loss against UC Irvine, they were able to keep the score much closer throughout the entire game. Elijah Hardy led the team with 17 points and four steals and the Matadors were able to force 15 turnovers in the game. CSUN had the ball with less than a minute left and were within two points, but they forced a shot after an offensive rebound. With time winding down the Anteaters would go home with a 75-70 win.
Women’s Golf
The CSUN women’s golf team traveled to Bakersfield Country Club to take on CS Bakersfield on Thursday, Feb. 3. With the help of freshman Julia Myklebust, the Matadors beat CSB 326-340 in a 14-shot victory.

The closest match saw CSUN’s Magdalena Hedrzak against SJS’s Muradyan. Muradyan was able to capture the first set, but Hedrzak won the second. The third set was a back-and-forth affair, which Hedrzak was able to close out and win.