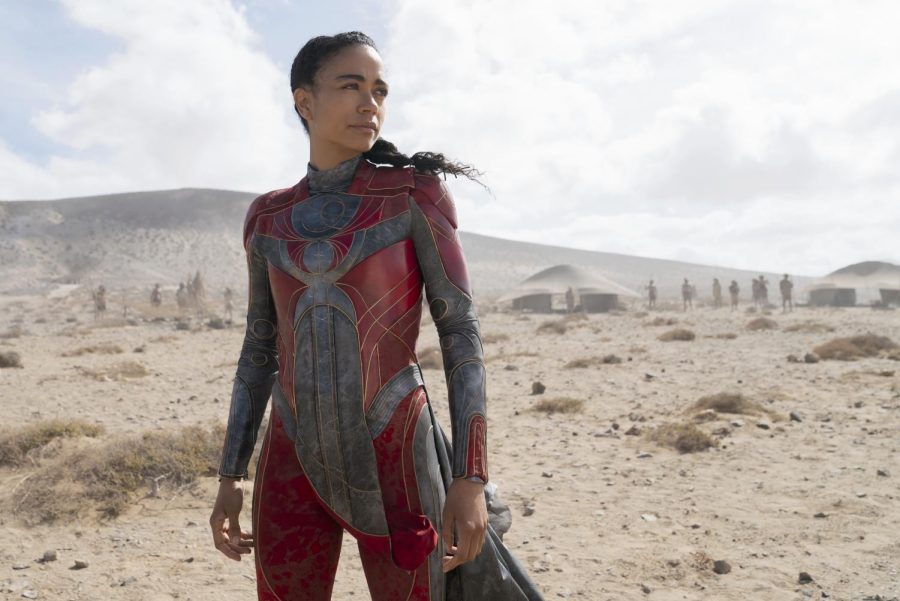 Lauren Ridloff, a CSUN alumna, brought to life the character of Makkari in her debut as the first deaf actress to play a superhero in Disney’s latest movie from the Marvel Cinematic Universe, “Eternals.”

Makkari was written in the original comic as a hearing white man, but Marvel Studios executive Nate Moore decided to make a big change to the character in the form of a deaf woman of color. Ridloff’s character is the first in the MCU to be deaf.

“Eternals” follows a group of alien beings that have been secretly living on Earth, helping societies advance and protecting humanity from a group of violent monsters called Deviants. Once separated, this team reunites to prevent the destruction of Earth.

Directed by Chloé Zhao, the first woman of color to lead a Marvel film, “Eternals” was lauded for its diversity. The majority of the characters in this film were brought to life by actors of distinct backgrounds such as Kumail Nanjiani, Gemma Chan, Ma Dong-seok, Salma Hayek and Ridloff.

Ridloff’s character was known as the fastest, wittiest and sharpest character among the other Eternals. She was also able to understand emotional cues that her hearing counterparts weren’t so quick to catch.

Despite having no vocal dialogue in the script, Makkari stands up for herself and is not afraid to fight back when it is needed. Makkari does not allow other characters to take advantage of her, which many disabled or chronically-ill characters in the media often fall victim to.

Ridloff, who was born deaf to a hearing Mexican American dad and a hearing Black mother, recognized that this was a big win for the deaf community and others that have been marginalized in Hollywood for such a long time.

“Finally seeing Makkari appear on the screen — wow,” said Ridloff in an article for Variety. “It was definitely life changing. And I hope that this has the same impact on different communities, people who have been marginalized or are underrepresented in this industry.”

Ridloff’s participation in “Eternals” was historic because it brought to life a character that resonated with so many individuals who rarely see themselves in the media.

In recent years, the portrayal of disabled and chronically-ill individuals in movies and on television have been very scarce, with less of these roles having gone to people of color.

The Annenberg Inclusion Initiative conducted a study on the 100 top-grossing films of 2019, finding that 2.3% of speaking characters had a disability, while 28.4% of this small group had a communicative disability such as deafness. Of the 100 films included in this study, 77 didn’t depict any females with disabilities.

Makkari’s disability was made a natural part of her character, whereas other members of the Marvel universe like Hawkeye have had their disabilities erased in film adaptations.

In the “Avengers” series, Hawkeye was not depicted as hard of hearing, as he is shown to be in the comics. This was remedied recently in the Hawkeye limited series on Disney+, which included his disability and also introduced us to another deaf actress, Alaqua Cox, who plays Maya Lopez.

Ridloff’s interactions with her peers were through the use of American Sign Language, and many of her fellow cast members learned how to sign during the filming process to better communicate with her. In the movie, Makkari’s disability was no reason for her to be treated differently.

“We need to have deaf writers and creative talent involved in the process of planning film projects from the beginning,” said Ridloff in a New York Times interview. “When you have deaf experts within and on the stage, from the crew to makeup artists, it feels like that naturally leads to more authentic representation on screen.”

Ridloff’s role has been great representation for the deaf community, resulting in an increased interest in learning sign language. Online searches for “learn sign language for beginners” have risen 250% since the release of “Eternals,” according to research done by Preply.

Ridloff’s Makkari joins Chadwick Boseman’s T’Challa, among others, in bringing forth change in Disney movies and series. As the Marvel universe continues to expand and include more diversity in their superheroes, it is important for Hollywood to take note that representation matters in front of and behind the camera.

“Hollywood is finally figuring out why it’s so important to have representation, and now it’s more about how,” Ridloff said. “That’s the part that’s more tricky.”