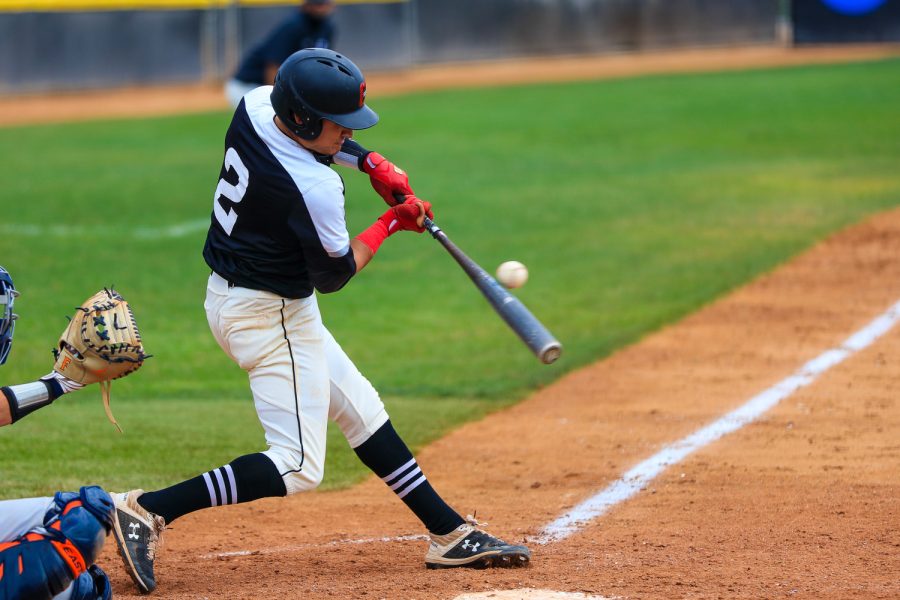 Carlos Arellano hits a foul ball during a doubleheader against the Cal State Fullerton Titans in Northridge, Calif., on Saturday, April 24, 2021. The Matadors lost game one 6-4.

CSUN men’s baseball 2022 season is set to get underway Feb. 18 as they face off against UCLA in a three-game series at Jackie Robinson Stadium.

CSUN baseball head coach Dave Serrano will be heading into his third and final season with the club, as he announced that this season would be his last. Serrano is going into his 33rd season of coaching and has accumulated a record of 477-326-1.

Despite the announcement, after ending the 2021 season on a high note by winning 15 of their final 21 games, the Matadors are looking forward to carrying that momentum into this upcoming season.

“The focus will not be about me, it’s going to be about this team,” Serrano said. “My approach is going to be the same, and that’s to put the best team on the field every day to have a team that’s going to compete at the highest level for Cal State Northridge.”

“For the hurdles we had to overcome as a program, I was happy with the way we finished the season,” Serrano continued. “I felt we finally hit our stride in getting in shape as a team after a month and a half of playing, for us playing the best baseball at the end of the year.”

CSUN (21-19) finished fourth in the Big West Conference last season. UC Irvine dominated the Big West with a 30-8 conference record and overall record of 43-18. The Matadors have their eye on dethroning the Anteaters and making the playoffs. CSUN hasn’t finished higher than fourth since 2002.

CSUN will look a little bit different this season with the departure of outfielder Denzel Clarke, who was drafted in the fourth round of the 2021 MLB First-Year Player Draft by the Oakland Athletics.

Although Clarke is admittedly a big loss, Serrano remains hopeful after getting Kai Moody back, “who was arguably our best position player last year and one of the better players in the Big West Conference,” Serrano said. “We’ll expect a big year out of him, but we [also] have a talented freshman class who will filter in.”

Despite Clarke going on to bigger and better things, CSUN has many ball players with years of experience. The Matadors have eight seniors and nine juniors, including utility player Moody, who will be returning this season as a redshirt senior, and a roster that understands what they can do.

“For me it’s about doing the right thing always and what’s good for the team, I know I need to perform well for the team to be able to make improvements from last year,” said returning sophomore infielder Nathan Barraza. “I know I’m going to have to be able to come up in big situations and just prove myself, and it won’t be just me, it’s going to be the whole entire team – we’re all hungry and everyone has something to prove.”

One of those seniors who is hungry for a conference title is Moody, who earned Big West Baseball All-Conference First Team honors last season while winning the conference batting title.

“I had to work really hard to get into the position that I am in right now,” Moody said. “I accept that challenge just because not only is it going to make me a better baseball player, but also a better person.”