1st generation: Overcoming obstacles on the path to success 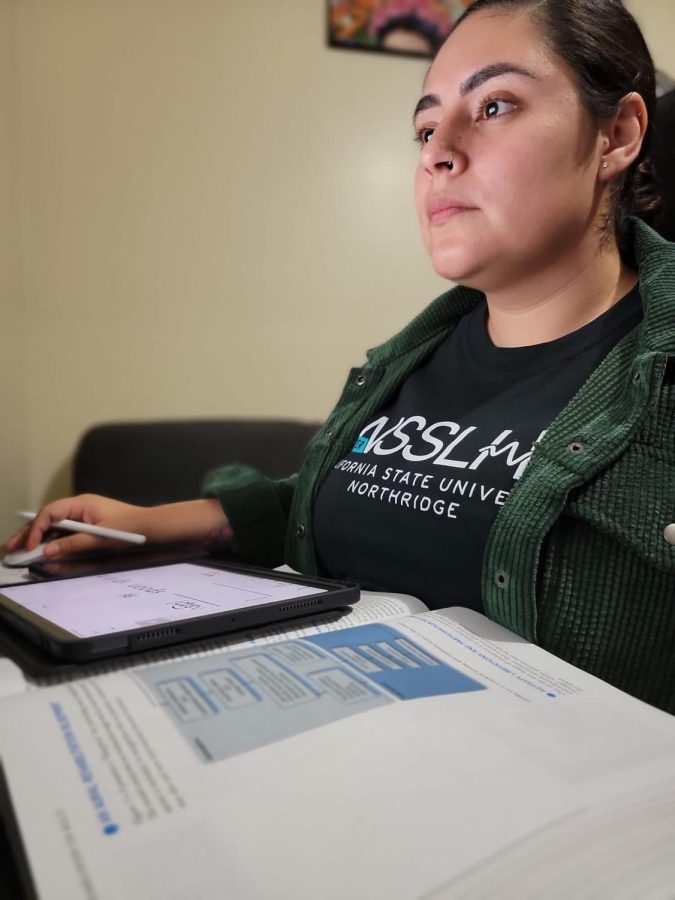 Judith Lopez will be the first person in her family to graduate from college. It hasn’t been easy.

Despite her plans, Lopez did not enroll in college after graduating high school. Her parents divorced, and as the oldest of three children, she had to help take care of her siblings because her mother was working in a factory for roughly 12 hours a day. College had to wait.

At 21, Lopez became a single mother, which set her back another five years.

Lopez is now 31 and on the brink of achieving her dream of graduating after turning obstacles into the personal motivation she needed to complete her degree at CSUN.

The pressures of being a single mother were compounded by the difficulty of having to steer through the college system with no map.

“My biggest struggle as a first-generation student is finding guidance and support,” said Lopez. “It’s hard navigating this alone without getting any feedback from my family, who does not understand what the process looks like.”

Her daughter Camila is now 10, and Lopez is set to graduate later this year.

“It’s going to be the best accomplishment of my life. Being able to earn this degree and pay for it out of my own pocket while raising a child makes me feel like I can do it all,” said Lopez.

Lopez’s journey was full of detours. She dealt with issues common to all first-generation students such as a lack of money, college preparedness and role models who could advise her.

First-generation students are typically defined as the first in their families to earn a degree. They also often come from low-income immigrant households and are predominantly non-white, according to the think tank Postsecondary National Policy Institute.

Nearly half of CSUN’s 35,000 undergraduates are first-generation students, according to the CSUN Counts data dashboard.

The Latino community is driving the change. About 12,000 of CSUN’s Latino student body of 19,000 are first-generation students.

As the president of The Campaign for College Opportunity, a non-profit organization that uses research and policy advocacy to help first-generation students succeed, Michele Siqueiros has devoted her career to helping students, especially Latinos. Siqueiros is motivated by her own experience as a first-generation college student.

Siqueiros believes that first-generation students have a tremendous impact on society, and can change their families trajectories by earning a college degree and increasing the amount of opportunities available to them.

The challenges they face are well studied, but Siqueiros thinks that conversation misses the point.

Beyond creating change for the futures of their families, first-generation graduates are also crucial to the future of California’s economy.

More Latino graduates are needed to support California’s position as the world’s fifth-largest economy, according to a study done by The Campaign for College Opportunity.

In order to meet the demand for educated employees, California needs 60% of its adult population to have a degree by 2030, but it won’t be able to meet that number until more Latinos earn degrees.

“It’s not just a personal good, but an absolute societal good,” said Siqueiros.

But first-generation students must overcome the triple threat of financial struggles, poor college preparation and inexperience with the college system before they can begin to reach their full potential.

Many students have to work and are forced to take out loans. About 65% of first-generation college graduates accumulate $25,000 or more in debt, according to the Pew Research Center.

As a result, when Latino students enroll they are more likely to be placed in remedial classes that are linked to lower college-completion rates.

“I was a top student but I was put in a remedial writing course when I started college. That can be pretty devastating,” said Siqueiros. “You feel like you’ve done everything asked of you, and yet you’re in an environment that tells you … you’re not quite ready.”

Less than 40% of students placed in remedial courses will earn a degree or transfer from a community college to a four-year university, according to The Campaign for College Opportunity.

Being a first-generation student can be a difficult journey for someone who cannot turn to their parents for guidance. It is more common for these students to help their parents, many of whom may not speak English or understand school-related forms and other documents.

Lopez felt lost on many occasions in college, so she sought out the comfort of her peers with similar experiences.

“We lean on each other a lot. We have become our own little family always checking in, helping with applications or sharing resources,” said Lopez. “Because we are the first in our family, our family does not provide this support but we find it in each other.”

Siqueiros acknowledges that navigating college without help is hard.

“When you’re going to get your driver’s license what do you do? You get in the car with someone who is an experienced driver and they show you,” said Siqueiros. “First-gen students don’t have any of that. They’re figuring it out as they go.”

Lopez is proud of the foundation she has created for her daughter’s future. She will be mentored by a college graduate in her family — something Lopez didn’t have.

Camila, who attended class with Lopez when a babysitter was not available, will be able to ask her mother for college advice when preparing for her future in higher education.