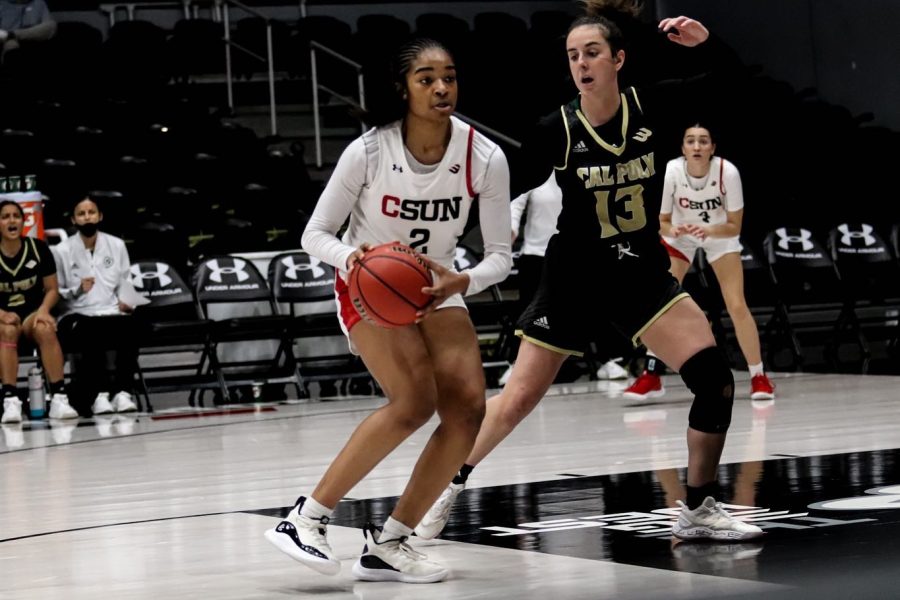 CSUN guard Sydney Woodley looks for a hole in the Cal Poly defense on Feb. 12, 2022, at The Matadome in Northridge, Calif.

In the second meeting of the two teams this season on Thursday night, CSUN women’s basketball fell short of sweeping Cal Poly after climbing back from a 20-point deficit. CSUN guard Jordyn Jackson had the opportunity to win the game at the end but fell short, as Cal Poly escaped with a 56-55 victory to tie the season series one apiece.

In their first meeting on Jan. 8, CSUN beat Cal Poly 54-45 in San Luis Obispo. Cal Poly forward Julia Nielacna hit the game-winning layup with 12 seconds left in the fourth quarter, giving the Mustangs their first road win of the season.

CSUN was able to come back from a 20-point deficit, with forward Kayanna Spriggs able to give CSUN the late lead with her free throw before Cal Poly’s game-winning layup. Tess Amundsen and Jackson led CSUN scoring with 15 points apiece.

“When you’re playing a team like Poly that just went into double overtime against Long Beach State and beat Fullerton … they’re coming in here and trying to get a win,” said interim head coach Carlene Mitchell after the difficult loss.

The first half was much different than the second. After an early 4-1 lead, Cal Poly ended the first quarter on a 14-2 run and built a 20-point lead by halftime. With smothering defense, Cal Poly held CSUN to 13% from the field and 20% from the 3-point line. Only three players scored in the first half for CSUN.

Throughout the second half it seemed as if the roles reversed, as CSUN started full-court pressing Cal Poly while forcing eight turnovers. CSUN scored 22 points in the third quarter, compared to just 13 over the first two.

“The players just stepped up the competitive nature,” said Mitchell about her players bringing the team back from the early deficit.

A pair of 3-pointers by guard Anaiyah Tu’ua in the fourth quarter, along with six free throws and a couple of layups, brought the Matadors all the way back. A late free throw by Spriggs gave CSUN their first lead of the game since it was 4-1.

The Matadors gave up that lead with only 12 seconds left in the game, with a chance to win it on the final possession. Mitchell said they were looking for many players during the last possession but couldn’t find an open shot.

This loss brings CSUN to 7-13 overall and 3-6 in the Big West Conference, with only seven games left until the Big West Tournament. Setting the tone going into the tournament is important, according to Mitchell.

“You have to win at home; it all starts with that … because the road games are extremely tough,” said Mitchell about the rest of the season.