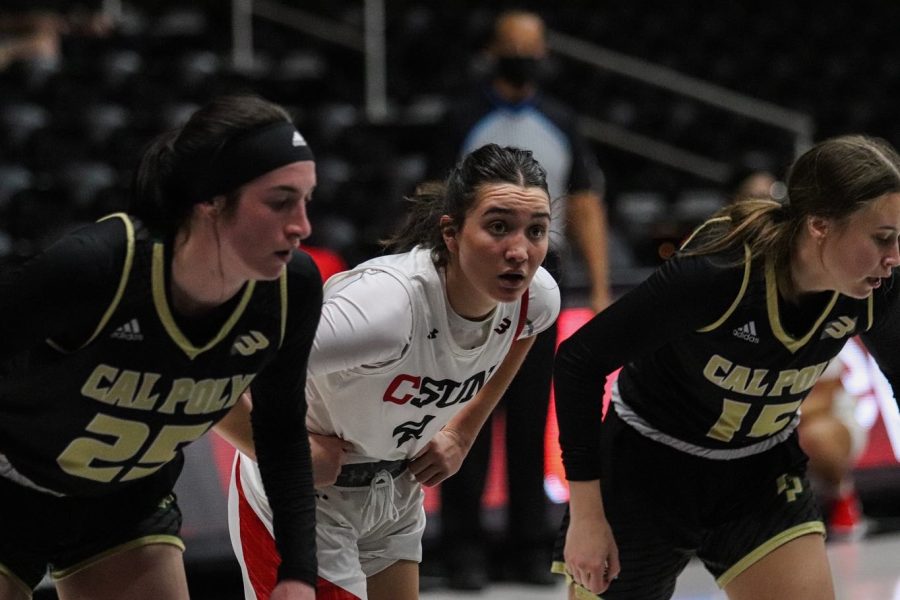 Rachel Harvey waits for her teammate to shoot a free throw on Feb. 10, 2022, at The Matadome in Northridge, Calif.

CSUN sports had a jam-packed week with showings from men’s golf, men’s volleyball, women’s and men’s basketball, softball and women’s water polo.
Men’s Golf
The Matadors men’s golf team started the week off at the Orange County Collegiate Classic. The open took place over two days, where the Matadors placed sixth out of 10 teams. CSUN started the open with rounds of 308 and 306, but finished their second day much better with a team round of 299 for a total of 913 over the two-day invitational.

Senior Paul-Louis Gachet finished the invitational tied for 16th place at eight-over 224. Sophomore Eirik Thomassen finished tied for 18th with nine-over for the tournament.
Men’s Volleyball
CSUN men’s volleyball played two matches this week, going against Vanguard University at home on Wednesday and traveling to play against USC on Thursday. The Matadors were able to soundly defeat Vanguard 3-0. CSUN freshman setter Donovan Constable led the game with 24 assists. CSUN did not allow any aces from Vanguard and was only blocked once.

Going against USC was a different story for the Matadors as they lost in three sets. Throughout the three sets, the Matadors combined for 24 total attack errors while the Trojans only had 11. USC was led by setter Chris Hall who had eight digs and 30 assists.
Men’s Basketball
Men’s basketball was able to snap an eight-game losing streak Thursday as they began a two-game road trip, defeating Cal Poly 83-78 in double overtime. CSUN’s Elijah Hardy, Atin Wright and Miles James played 47 minutes each.

The Matadors let a six-point lead slip away in the second half, and neither team could find much success in the first overtime. Hardy and Wright combined for 21 of CSUN’s 24 total points in the two overtime periods. Hardy finished with 26 points and Wright finished with 24.

CSUN was able to keep their winning ways going with a win against CS Bakersfield on Saturday 71-65. Wright led the game in scoring with 22 points on 6-for-9 shooting from beyond the arc. Hardy was a catalyst on defense as he had six of the team’s 12 steals in the game.
Women’s Basketball
CSUN women’s basketball, before winning Saturday, was on a two-game losing streak after losing to Cal Poly on Thursday in a close game 56-55. The Matadors got off to a slow start, scoring only 13 points in the first half.

The second half was a different story, as CSUN went on to score 22 in the third and 20 points in the fourth quarter. CSUN was able to gain a one-point lead with 1:42 left to play in the fourth, but a layup by Julia Nielacna with 14 seconds left sent the Matadors home without a victory.

The Matadors snapped the streak at home on Saturday against CS Bakersfield, winning 53-52. CSUN junior guard Jordyn Jackson led the team with 16 points.

With five seconds left in the fourth quarter and down 52-51, Jackson was fouled by CSB’s Andie Easely. Jackson knocked down both free throws, giving CSUN a one-point lead and the game.
Softball
Softball had a tough start to their season, having to go up against No. 3 UCLA and No. 17 Oregon. However, they were able to win both of their games against the University of Nevada. In the UCLA matchup, the Matadors let 11 hits and 13 runs go off in the first inning. CSUN went on to suffer a crushing defeat 22-0.

In the first matchup against Oregon it seemed like CSUN had a chance, after being down 4-2 to end the sixth inning. The Matadors let the Ducks score five runs in the seventh inning and lost the first game 9-3. The second game was similar to the UCLA matchup, as the Ducks got out to an 11-run lead at the top of the second inning, and lost 16-0 in just five innings.

CSUN closed their wild week with a set of wins against Nevada on Saturday. In the first matchup of the doubleheader, the Matadors got a walk-off win because of a wild pitch by Nevada, winning 2-1.

In the second matchup it was an even tighter finish than the first game. The two teams were tied at the end of seven innings. In the top of the eighth inning, the Wolfpack scored one run and it was looking bleak for the Matadors.

CSUN pinch hitter Sami Garcia stepped up to the plate with Mikayla Carman and Samantha Kwiatkowski on base. Garcia singled to second, but because of an error by Nevada’s Aaliyah Jenkins, Carman and Kwiatkowski were able to score two runs to win the game 3-2.
Women’s Water Polo
Women’s water polo took part in the Triton Invitational, going against No. 6 Hawaii, No. 23 Marist, No. 16 UC Santa Barbara and No. 19 San Diego State. In the first matchup against Hawaii, CSUN struggled in the beginning by letting them score seven unanswered points before getting in the score column. The team struggled to crawl back, eventually losing 18-3.

The Matadors were able to win 13-10 in their game against Marist. Led by senior Kylee Jansen who scored four points in the match, CSUN was able to run away with it after being tied going into the final period.

CSUN’s Dorottya Telek scored a hat trick in their game against UCSB, but the Matadors ended up falling short 17-9. To finish off the four-game weekend, the Matadors faced off against SDSU.

CSUN jumped out to an early 4-0 lead after the first quarter. Telek scored four goals in the game and started the third quarter with a score to put the Matadors ahead 8-3. A 4-0 SDSU run brought them within one. After a back-and-forth third quarter, the Matadors were able to pick up two early goals in the fourth that gave them enough cushion to hold onto the win 11-10.