Matador of the Week: Jolene Coetzee 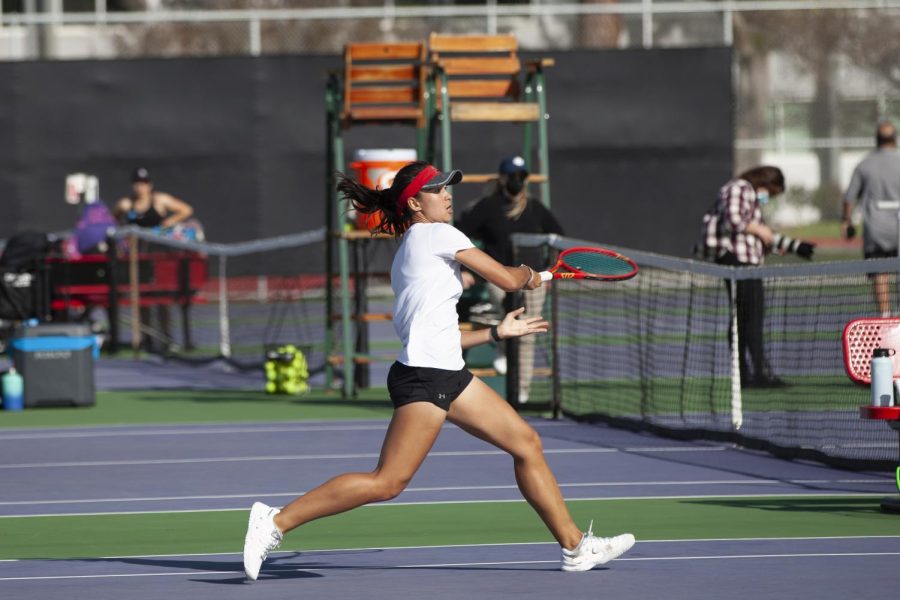 Jolene Coetzee, center, was selected Matador of the Week for her dominance on the tennis court. The senior won both her singles and doubles matches in straight sets against San Jose State earlier this month. Photo courtesy of CSUN Athletic Communications.

Jolene Coetzee was selected Matador of the Week for her dominance on the tennis court, after winning both her singles and doubles matches in straight sets against San Jose State earlier this month.

“For us, as long as we are having fun and not worrying about winning or losing, that’s when we do the best,” Coetzee said about playing with Ana Isabel Fraile Toboso, her doubles partner since she was a freshman.

From Taichung City, Taiwan, Coetzee left home at the age of 14 to attend Anaheim Discovery Christian School. The biggest difference between living in Taiwan and California has been the separation from her parents.

“It’s not the same knowing that they were just an hour away, so if I needed anything I could call them and they could come,” said Coetzee, who has only been able to see her parents once or twice a year.

Due to the coaching culture in Taiwan, Coetzee was hesitant to continue tennis. However, she found love in tennis again once she moved to the U.S.

“I loved the sport even more and I loved how the coaches coached,” said Coetzee about her transition stateside.

Majoring in kinesiology, Coetzee hopes to become a nurse. After graduation she sees herself taking a break from tennis, and perhaps getting into coaching or having a hitting partner.

While attending high school, she was ranked No. 36 in the nation while posting several wins over top 30 players. During her time at CSUN, she earned honorable mention Big West Women’s Tennis All-Conference Team in singles in 2019, and second-team All-Conference in doubles in 2021.

Some of Coetzee’s inspirations include tennis stars Novak Djokovic, who she admires for his style of play and creativity, and Rafael Nadal, because of his mentality and sportsmanship on the court.