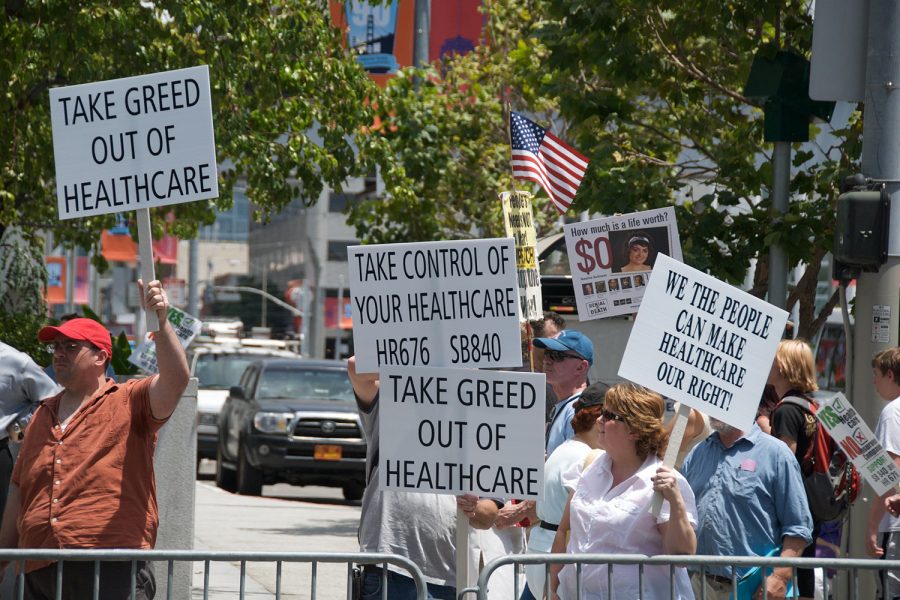 Protesters stand outside the health insurance conference at Moscone Center West during the summer of 2008 in San Francisco, Calif.

The attempt to bring a single-payer health care system guaranteeing health care for all died in the California Assembly on Jan. 31. The bill was not expected to meet the required number of votes to advance in the legislature.

Assembly Bill 1400 was set to create a single-payer health coverage system for the state of California. California Guaranteed Health Care for All program, or CalCare, would have been made accessible to all residents regardless of their citizenship status.

“Although the bill did not pass the Assembly by today’s deadline, this is only a pause for the single-payer movement,” said California Assemblyman Ash Kalra. “Our coalition, including the mighty California Nurses Association, will continue the fight for accessible, affordable, and equitable health care for all Californians.”

Kalra opted to let AB 1400 die rather than force a vote on it. In a statement released by Kalra, he articulated that it was the best course of action since it was clear that there weren’t enough votes necessary to pass.

There are a total of 80 members in the California State Assembly. A bill is required to have 41 votes to proceed to the next stage.

The proposed bill had a two-year deadline to be advanced from its house of origin. The deadline for the bill was Jan. 31.

One of the biggest factors in the bill not passing was the cost of the single-payer health care system. At the beginning of the year, Gov. Gavin Newsom unveiled a $286.4 billion budget for the state. According to the New York Times, the estimated cost of AB 1400 was set between $314 billion and $391 billion every year.

“I’m not surprised it didn’t pass,” said Tom Hogen-Esch, a CSUN political science professor. “It would have doubled the state general budget, then you would have to double taxes, and once you have to do that it’s generally game over.”

This is the second time in the past five years that a single-payer bill has died in the Assembly. In 2017, Assembly Speaker Anthony Rendon made a proposal of his own. Just like AB 1400, his proposal failed to get the necessary votes to advance from the Assembly. Rendon used the failed bill as an example of how hard it is to implement a single-payer health care system.

“The votes were not there today, but we will not give up,” said Kalra. “Health care is a human right, and CalCare has made clear the just path as an alternative to the inequitable system we have in place today.”