AS votes to approve $30,000 to sponsor President Beck’s investiture 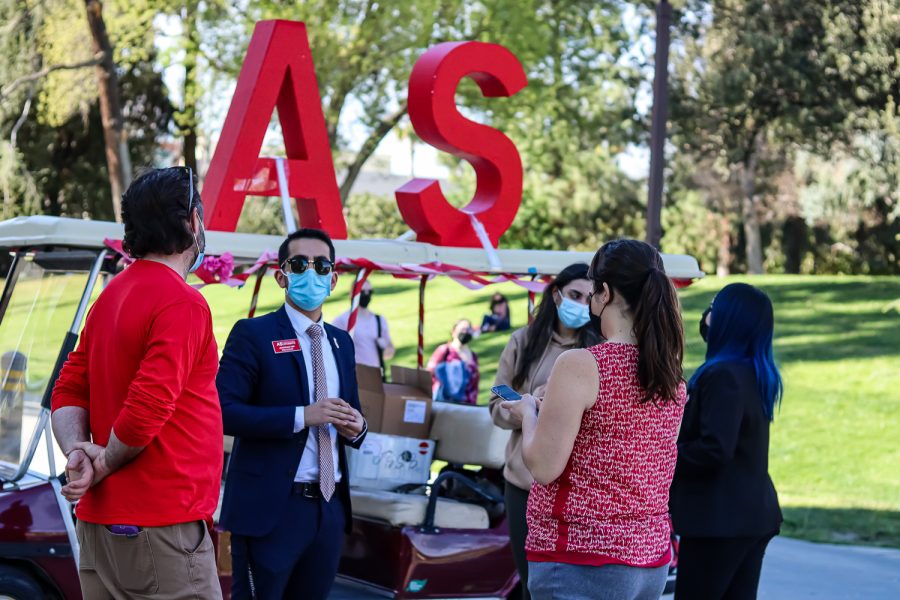 CSUN Associated Students President Jonathan Hay meets with students and staff members on the first day back to in-person classes on Feb. 14, 2022, in Northridge, Calif.

On Monday, CSUN’s Associated Students voted unanimously to approve the allocation of $30,000 to sponsor the investiture of CSUN President Erika D. Beck.

The AS agreed to allocate money from their end-of-year excess funds to sponsor the investiture, which is scheduled to take place on March 14.

An investiture is when someone receives a ceremony for achieving a high position of office. The AS will match an already sponsored $30,000, bringing the total to $60,000.
Motions Approved
AS President Jonathan Hay and the staff also voted unanimously to allocate $26,000 from their budget to the Parent Scholarship Endowment, which will aim to help student parents.

The senate approved the appointments of Archana Ravi as the senator for the college of engineering and computer science, and Samantha Hines as a clubs and organizations committee member.

A motion was passed by the senate to approve the constitutions for the CSUN Students Supporting Israel club and the Soon Movement Global club.
Announcements
Kiana Requena, the chair of internal affairs, and her committee are working on implementing Assembly Bill 367. The bill will require CSUN to stock restrooms with an adequate supply of free menstrual products starting the 2022-2023 school year.

AS Executive Director Patrick Bailey said that Campus Conversations, an event that allows students to talk to staff members in an open forum, is returning this semester. The next event will take place on Feb. 22.

Senator Paige Hajiloo announced that a “Tabling Fest” will take place from Feb. 22 to 24, giving clubs and organizations an opportunity to talk to students and recruit new members.

The next AS meeting is scheduled for Feb. 21 at 9 a.m, located at the Grand Salon.