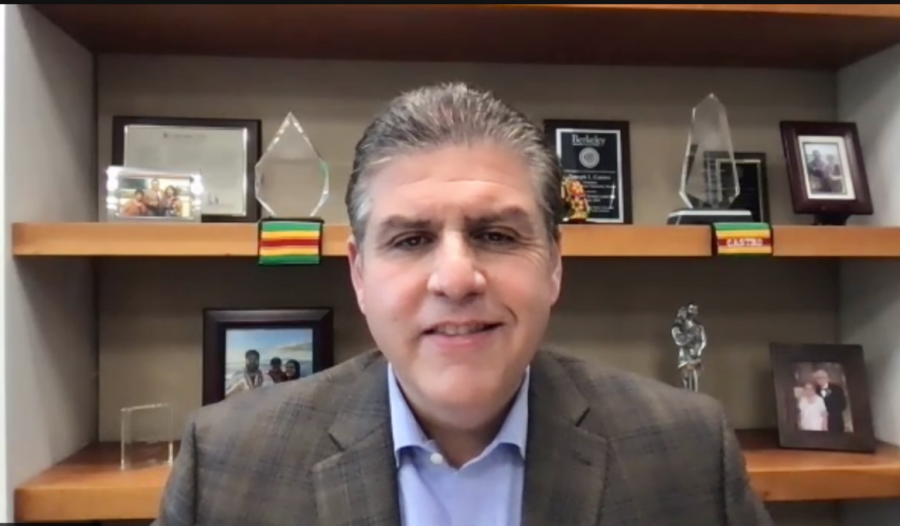 California State University Chancellor Joseph Castro spoke with the Cal State Student Association on different issues regarding the upcoming fall 2021 semester during a virtual town hall Monday, May 3, 2021. Castro said he could not promise the transition to in-person learning will be “100% smooth” but said the CSU will work to support students during the transition.

California State University Chancellor Joseph I. Castro resigned on Feb. 17 amid criticism for his handling of Title IX and workplace harassment complaints as president of Fresno State.

While president of the university, Castro received multiple complaints regarding Frank Lamas, then head of student affairs, which were exposed in a USA Today article earlier this month.

Lamas was accused of sexual misconduct, with accusations ranging from inappropriate touching and sexist remarks to belittling, bullying and retaliation against employees that worked under him. He has denied any allegations of wrongdoing.

Castro never publicly called for Lamas’ resignation when the complaints were brought to his attention and instead agreed to a $260,000 payout and full retirement benefits for him to leave his position. Although Lamas was barred from working at any university in the CSU system, Castro granted him an achievement award and a letter of recommendation if he chose to work for a university outside the system.

“I have been honored to serve the California State University for more than eight years, including as its eighth chancellor, and the decision to resign is the most difficult of my professional life,” Castro said in the CSU announcement of his resignation. “While I disagree with many aspects of recent media reports and the ensuing commentary, it has become clear to me that resigning at this time is necessary so that the CSU can maintain its focus squarely on its educational mission and the impactful work yet to be done.”

Castro was named chancellor of the CSU system by its board of trustees in January 2021, three weeks after Castro’s settlement with Lamas. The board of trustees claims that they were first made aware of the situation in early February of 2022, following the USA Today article that brought the accusations to light.

It was at this time that Castro sent a Feb. 4 email in which he apologized for his handling of the situation. He encouraged a system-wide review and awareness campaign regarding Title IX and sexual harrasment. He did not, however, imply any intention of resigning.

“I am fully committed to working with our campus presidents and the CSU Board of Trustees on these critically important issues and I pledge to continue to do so until the California State University becomes a national model for the prevention and redress of sexual misconduct in all its forms,” Castro wrote.

Politicians, CSU faculty members, media outlets and students began urging Castro to resign, but it was not until a scheduled closed-door meeting with the CSU board of trustees on Feb. 17 that Castro announced his resignation. That same announcement also mentioned a system-wide Title IX assessment, which aims to “provide insights, recommendations and resources to help advance CSU’s Title IX and civil rights training, awareness, prevention, intervention, compliance, accountability, and support systems.”

Steve Relyea, CSU’s executive vice chancellor and chief financial officer, has taken the position of acting chancellor until the board of trustees officially names an interim chancellor.

CSUN Associated Students President Jonathan Hay addressed the allegations at their Feb. 14 meeting, and later said that the AS would typically be involved in any “review of policy or programming affecting students.”

“Based on the information provided, it is clear that the chancellor failed to handle the situation correctly,” said Hay. “To pay off Lamas to get him to leave Fresno State and hide all the allegations is a disgrace.”

CSUN President Erika D. Beck also addressed Castro’s resignation in an email sent on Feb. 18. Beck said that although the incidents involving Lamas did not occur at CSUN, “they deeply affect and sadden us all and implore us to reflect on our own practices.”

“We will embrace this moment as an opportunity to review, and strengthen our campus practices as needed, to ensure we are living our values, modeling them for students and demonstrating care for our community,” said Beck.