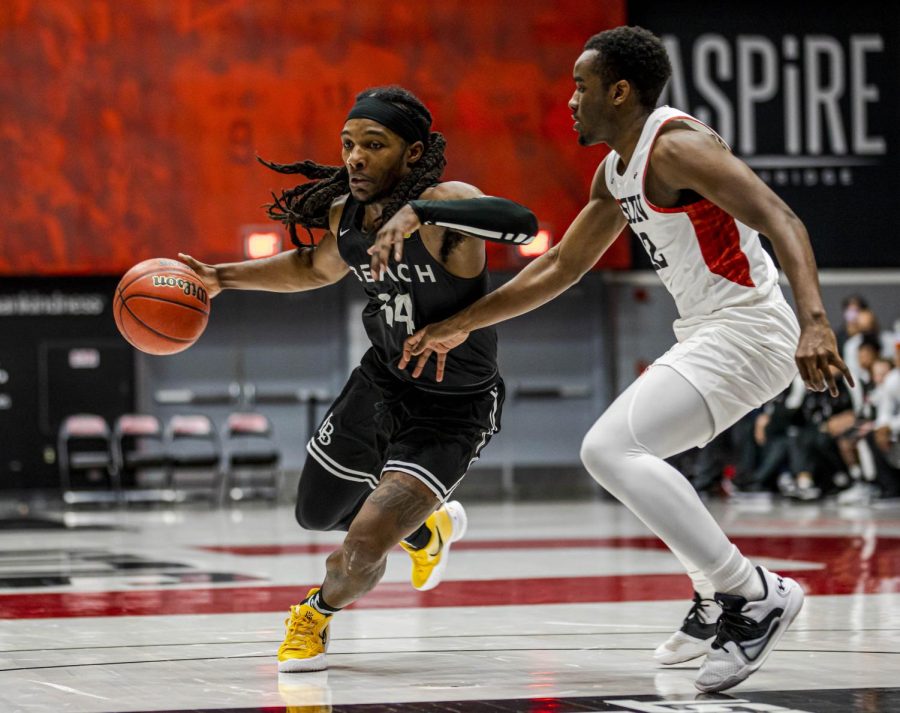 Colin Slater (14) makes a play against Marcel Stevens (12) on the court inside The Matadome during a CSUN home game against Long Beach State. The Beach took the win with a 72-59 victory over CSUN in Northridge, Calif., on Thursday, Feb. 17, 2022.

CSUN men’s basketball battled through the beginning of the first half, trading baskets with conference-leader Long Beach State, but ultimately lost 72-59 Thursday night at The Matadome.

The fast-paced tempo and smothering defense were too much for CSUN, who dug themselves into a hole heading into the second half, ending their two-game winning streak.

“They are the best team in this league for a reason,” said Trent Johnson, CSUN interim head coach, about Long Beach State’s fast tempo and pressure defense.

Long Beach State ranks top 25 in the nation in average tempo. They managed to push the ball up the court quickly whenever they had the chance, whether it was after missed shots or made baskets by CSUN. In addition to the pressure on the offensive end of the court, full-court presses were deployed by the Beach on the defensive end.

“We talk and we work on press breakers, catching the balls with two hands … but you can’t simulate in practice the kinds of things Long Beach has,” Johnson said.

The Beach outscored CSUN 25-12 in fastbreak points. Long Beach State guard Jadon Jones put up 25 points, including four 3-pointers, while scoring 17 in the second half.

Long Beach State was able to drift away and end the half ahead 40-29, as they went on a 17-2 run, led by guard Joel Murray’s 12 points. Hardy led CSUN in scoring heading into the second half with seven points.

Missed shots at the end of the half is what Johnson felt was crucial in cutting the Beach’s lead. As the second half progressed, CSUN was unable to climb out of the deficit, falling behind by 20 at one point.

CSUN forward Fidelis Okereke put up a monster game in the losing effort, leading the team in points and rebounds with 14 apiece.

“I thought Fidelis gave us probably one of his best games collegiately,” Johnson said.

Johnson hopes the team brings more of the competitiveness it has shown on the road back home, while focusing on consistently executing the coaching staff’s gameplan. The Matadors have five games remaining before next month’s Big West Tournament.