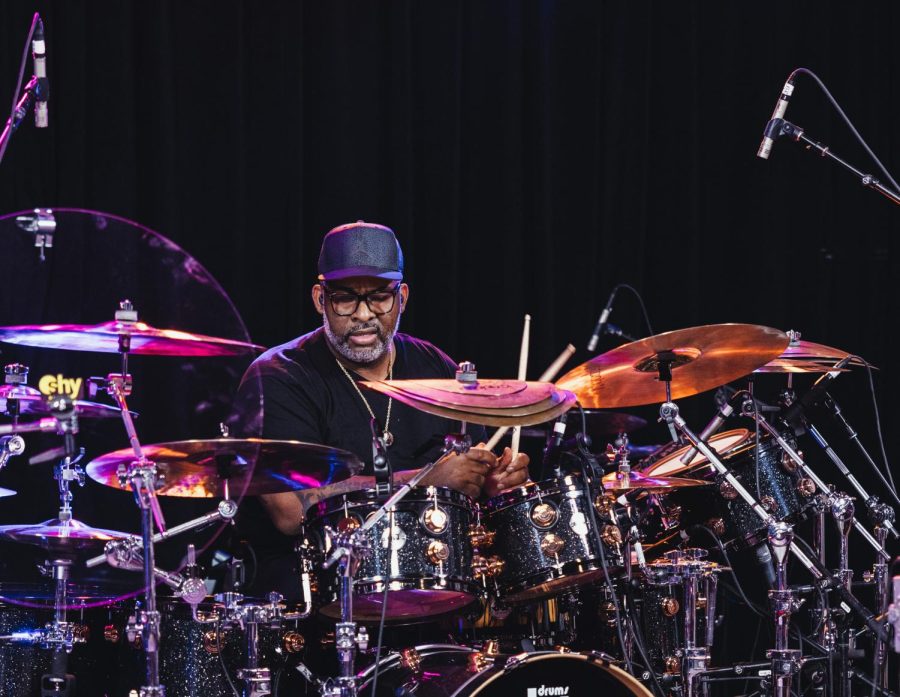 Trevor Lawrence Jr., a CSUN Department of Music lecturer, played the drums alongside rap icons in the 2022 Super Bowl halftime show at SoFi Stadium on Feb. 13.

Having built a reputation as a widely-coveted drummer in the hip-hop world, Lawrence got the opportunity to jam out in the packed Inglewood arena. Lawrence can be seen giving beats to the melody during Snoop Dogg’s performance of “The Next Episode.”

Before sharing the big stage with West Coast icons Dr. Dre, Snoop Dogg and Kendrick Lamar, Lawrence worked his way up as a versatile musician whose musical journey was rooted in jazz and later influenced by hip-hop.

Lawrence began learning the drums at the age of two, preparing him for his ventures as a jazz band drummer during his teenage years. The musician was also influenced by the hip-hop genre amid its rise in the early ’80s. It was then that Lawrence was inspired to add DJing and beat production to his musical arsenal while in middle school.

Supporting Lawrence’s musical endeavors was the abundance of talent that surrounded him growing up. His mother, Lynda Laurence, was a member of the ’60s pop-soul group The Supremes. His father, Trevor Lawrence Sr., was a saxophonist and producer who worked with R&B legends such as Stevie Wonder and Marvin Gaye.

Lawrence Jr. met CSUN alumnus and Grammy Award-winning producer Mike Elizondo at Alexander Hamilton High School in Los Angeles. The two classmates even played in their first band together, before going on to work with other renowned musicians.

Lawrence now holds a resume decorated by collaborations with many of hip-hop’s biggest artists.

Dr. Dre and Lawrence first met at a Death Row Records audition for an all-Black heavy metal band — a project that never came to fruition following Dr. Dre’s departure from the record label. From that point on, Dr. Dre kept in touch with the drummer for future collaborations. One of these was a 1999 “Saturday Night Live” performance of “Forgot About Dre” and “Still D.R.E.,” alongside featured rappers Eminem and Snoop Dogg.

About a decade after the “SNL” performance, Lawrence was invited by Dr. Dre to join the rapper’s record label, Aftermath Entertainment. Lawrence helped create Dr. Dre’s 2015 album “Compton,” and was credited as a drummer, composer, percussionist and producer.

Lawrence also continued to work with G-Funk pioneer Snoop Dogg following their “SNL” concert. With credits on multiple albums, including Snoop Dogg’s latest project, Lawrence has toured the world as a drummer with the Long Beach rapper.

In addition to collaborating with the innovators of West Coast hip-hop, Lawrence has lent his drumming skills to Kendrick Lamar’s Grammy Award-winning albums “To Pimp a Butterfly” and “good kid, m.A.A.d city.”

Outside of the West Coast, Lawrence has frequently collaborated with Detroit rapper Eminem. Lawrence most recently worked on Eminem’s 2020 album “Music to Be Murdered By.”

With a successful career thus far, Lawrence took his love for hip-hop to academia. After being offered a position at CSUN’s music department by professors Jeffrey Izzo and Andrew Surman in 2019, Lawrence joined the music industry studies program as a guest lecturer. Two years later, Lawrence returned for the 2021 fall semester to teach students about the significance of hip-hop as a medium of self-expression and its cultural influence in the United States.

Lawrence stressed the importance of recognizing the legitimacy of pursuing a career in hip-hop in an interview with Vater Percussion.

“My dream is to one day have a minor or major in hip-hop be available, because it’s just a validation of the artform and the fact that it’s a real career,” Lawrence said.

Lawrence believes there is no reason for hip-hop to be treated differently from jazz and classical music degrees.

Despite not being a common subject taught in universities, hip-hop’s prominence as one of the most listened-to genres in the U.S. may be able to change the status quo. Hip-hop’s rise in popularity has also led to an increase in curiosity about the genre, rather than just listening to it.

Lawrence and music department Chair John Roscigno’s hip-hop course reflected this growing interest. Among the 100 students who took their class, around 90% of them identified as non-musicians, according to Lawrence.

“I’m not some authored academia guy. I’m a new teacher that they came [to] and they’re interested in taking this class because of the information,” Lawrence said.

Lawrence hopes that implementing hip-hop curricula into universities will encourage a new population of students to learn about the craft and potential careers they can pursue in that field.

“There are a lot of people who don’t go to college because they don’t have something like that,” Lawrence said. “They say, ‘I’ll just go out in the real world and try to see what happens.’ But imagine you had an institution who actually welcomed those people.”