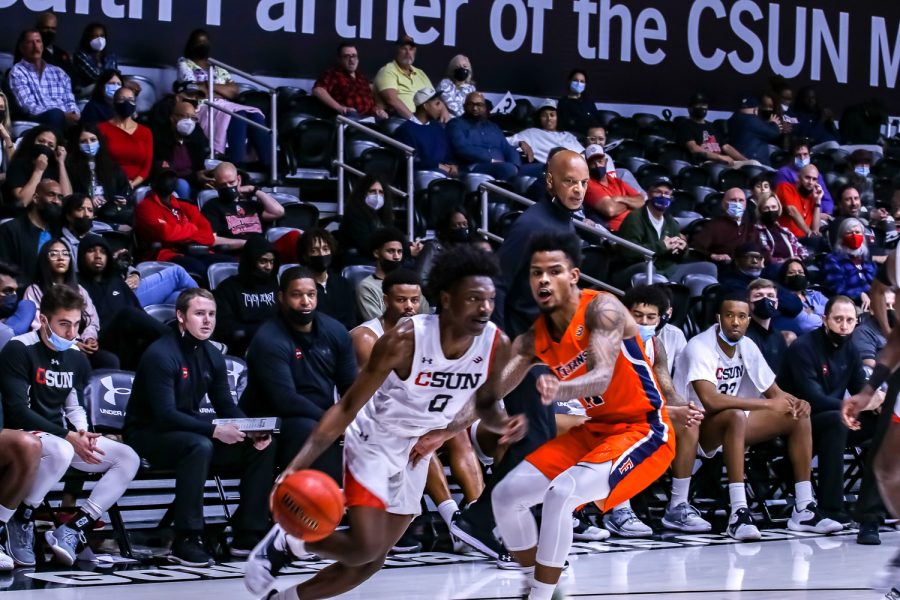 CSUN guard Elijah Hardy drives to the basket against a Cal State Fullerton defender on Feb.19, 2022, at The Matadome in Northridge, Calif.

CSUN guard Atin Wright shoots from the left corner 3-point line with just under four minutes left in the game. The Matadors desperately need a basket to get back in the game.

The Matadors are now within 7 points against the second seed in the Big West Conference, Cal State Fullerton (16-8, 9-3 Big West).

The crowd erupts in cheers: “Let’s go CSUN! Let’s go CSUN!” But it was not enough as the Matadors fell 81-73 in a hard-fought battle against the Titans.

This was the second time this season that these teams had met. The first matchup was on Jan. 13, where the Titans defeated the Matadors 79-64 in Fullerton.

Spectators filled The Matadome on Saturday night for the Pete Cassidy Game, honoring the life of the CSUN coaching legend. Cassidy coached the Matadors for 25 years, leading them to 334 victories in that span.

Friends and family of Cassidy stepped onto the court during halftime to honor the legacy of the coach. Cassidy was inducted into the Matador Hall of Fame in 2004.

The Matadors came out of the gates firing on all cylinders. CSUN forward Onyi Eyisi made the first three shots for the Matadors, giving them a 6-2 lead.

Both teams went back-and-forth trading baskets in the first half.

CSUN guard Elijah Hardy drove hard to the basket and finished with his left hand, bringing the Matadors within 2 points, 18-16. Two minutes of scoreless basketball from the Matadors left the door open for CSUF. The Titans would pull ahead 27-16 after a 9-0 run.

A block and a steal by CSUN forward Fidelis Okereke sparked a Matador run with under four minutes left in the half. A 3-pointer from CSUN guard Marcel Stevens brought the Matadors to within 4 with less than a minute remaining in the half.

The Matadors entered the half down 42-36.

CSUN looked to continue their high energy that they brought in the first half into the second, but the Titans had other plans.

The Titans went on a 9-3 run to start the second half. CSUF guard Tray Maddox Jr. hit a 3-pointer with the shot clock running down, giving the Titans a 68-54 lead.

The game was starting to slip away from the Matadors. CSUN would cut the deficit to 7 because of Wright’s 3-pointer with 3:49 remaining. His 28 points on the night were not enough to take down the Titans. CSUF outrebounded CSUN 34 to 16, while shooting 58% from the field.