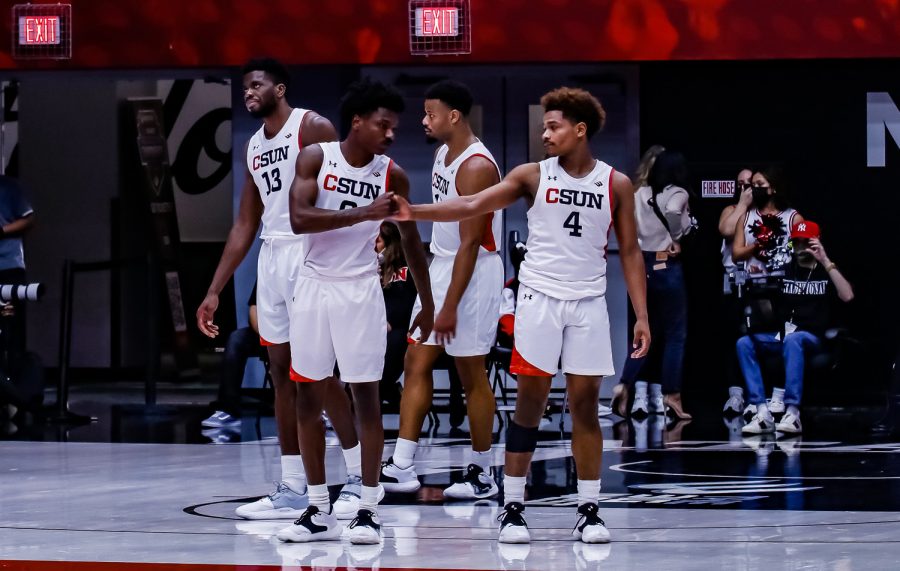 CSUN sports had lots of action this past week with showings from softball, women’s and men’s basketball, men’s volleyball, baseball and women’s water polo.
Men’s Basketball
CSUN had back-to-back wins last week, but came up short in their two-game homestand against Long Beach State and Cal State Fullerton this week.

In their game against the Beach, the Matadors had a 29-28 lead with six minutes left in the first half. CSUN went scoreless the rest of the half and allowed a 12-0 run.

The Matadors were unable to mount a comeback after halftime, losing the game 72-59. Sophomore Fidelis Okereke led the team with a double-double, scoring 14 points and grabbing 14 rebounds.

CSUN tried to bounce back from their defeat with a win against Fullerton, but lost 81-73. CSUN guard Atin Wright had a season-high 28 points, shooting 4-for-8 from beyond the arc. Fullerton outrebounded the Matadors 34-16 and even notched 11 offensive boards. After a closely contested first half, Fullerton was able to run away with it in the second.
Women’s Basketball
The Matadors were coming off of a win against CSU Bakersfield and headed on a road trip this week, going against Long Beach State and Cal State Fullerton.

CSUN played a close game against the Beach on Thursday, and won 62-57. CSUN forward Tess Amundsen went on a tear, scoring a season-high 32 points on 10-for-14 from the field. The Matadors were able to have an efficient night from the perimeter, going 9-for-12 from deep, compared to the Beach’s 6-for-17.

CSUN was unable to keep their two-game winning streak going against Fullerton on Saturday, losing 61-53. CSUN struggled to score, with Amundsen and guard Jordyn Jackson combining for 43 of the Matadors 53 points.

Amundsen continued her hot streak and shot 5-for-6 from beyond the arc. The Matadors had 19 turnovers in the game and were unable to make a comeback after trailing by 10 early in the second quarter.
Softball
It was another jam-packed week for the Matadors softball team. CSUN competed in the Campbell/Cartier Classic at San Diego State University, playing five games in three days.

Going against SDSU on Thursday, the Matadors found themselves down 4-1 at the top of the seventh inning. CSUN outfielder Samantha Kwiatkowski’s single helped Aaliyah Swan score, bringing the lead down to two.

A three-run home run from Jaymi Steward gave the Matadors a one-run advantage. Catcher Kennedi Sorensen was able to put the nail in the coffin with another home run to left field, giving CSUN a 6-4 win.

On Friday CSUN took on Southern Utah, winning 4-0. It was a tremendous showing from Matadors pitcher Alexis Martinez. She pitched all seven innings and had 12 strikeouts while only allowing three hits. Sorensen got the team rolling with a home run in the bottom of the first.

The hot start to the Campbell/Cartier Classic cooled off when the Matadors took on West Point, losing 4-2. At the top of the third inning, a single from Sorensen brought in a run from Alexis Lemus, giving CSUN a one-score advantage.

The bottom of the third inning was a different story. The Matadors allowed Army to score off of a single, followed by a three-run home run from Jiselle Castano.

The Matadors got the same result in their first game on Saturday, going against CBU. An early one-run CSUN lead in the first inning was erased by the Lancers when they scored two in the bottom of the first.

The score would stay the same until the bottom of the sixth, where CBU scored two more runs to put it out of reach for the Matadors, 4-2.

Finishing off the three-day classic against Southern Utah, the Matadors were able to secure a 3-2 win. CSUN’s Sorensen homered to right field in the top of the first, which brought in Steward to give the Matadors a two-run lead.

In the second inning, a single from Mikayla Carman brought in another run. The Thunderbirds tried to mount a comeback and were able to score two runs in the fourth inning. Neither team scored again.
Baseball
CSUN’s baseball team started their season off going against No. 22 UCLA in a three-game series. In the first game it was a dominant performance by the Bruins, 9-2. The Bruins scored seven unanswered runs, until the top of the sixth inning where the Matadors would muster their only two runs of the game.

The Matadors were able to turn things around quickly in their second game. A sacrifice fly by CSUN’s Joey Kramer brought in Mason Le for the first score of the game. Le kept the team going in the fifth inning when he singled to left for an RBI.

CSUN’s Kai Moody and Kramer would both go on to hit home runs in the game, and the Matadors found themselves with a comfortable 6-0 lead. A three-RBI double and a wild pitch got the Bruins to four runs, but the Matadors were able to stop the comeback and come away with a 6-4 victory.

UCLA started the third and final game of the week well, scoring three runs through the first eight innings. CSUN was down three in the top of the ninth and knew they needed to score. With Moody and Le on base, Andrew Sojka came up to bat. Sojka homered to center field and knotted the game at 3-3.

In extra innings, neither team found a way to score until UCLA’s Ethan Gourson stepped up to the plate. Gourson hit a walk-off home run to left-center field, winning the game for the Bruins 5-3.
Men’s Volleyball
The Matadors took on No. 8 Stanford in their one match this past week. CSUN was dominated in their first two sets, only being able to score 17 and 13 points, respectively. The third set was much closer.

CSUN found themselves up 22-20, but a 4-2 run by Stanford tied it up at 24. A kill from Stanford’s Will Rottman put them up by one, and an attack error by CSUN’s Inaki Bustamante gave Stanford the third and final set 26-24.
Women’s Water Polo
No. 24 CSUN took on No. 7 UC Irvine on Saturday, in what was a dominant performance for the Anteaters. UCI led from start to finish, having two shutout quarters against the Matadors.

CSUN let the Anteaters score seven straight points until CSUN’s Valeria Martinez was able to score midway through the second quarter. The Matadors were only able to score three points in the second half and lost 19-5. CSUN’s Anna Pal led the team with two points and a steal.