What’s happening in Ukraine? A CSUN student from Kyiv explains: “No one knows our history.” 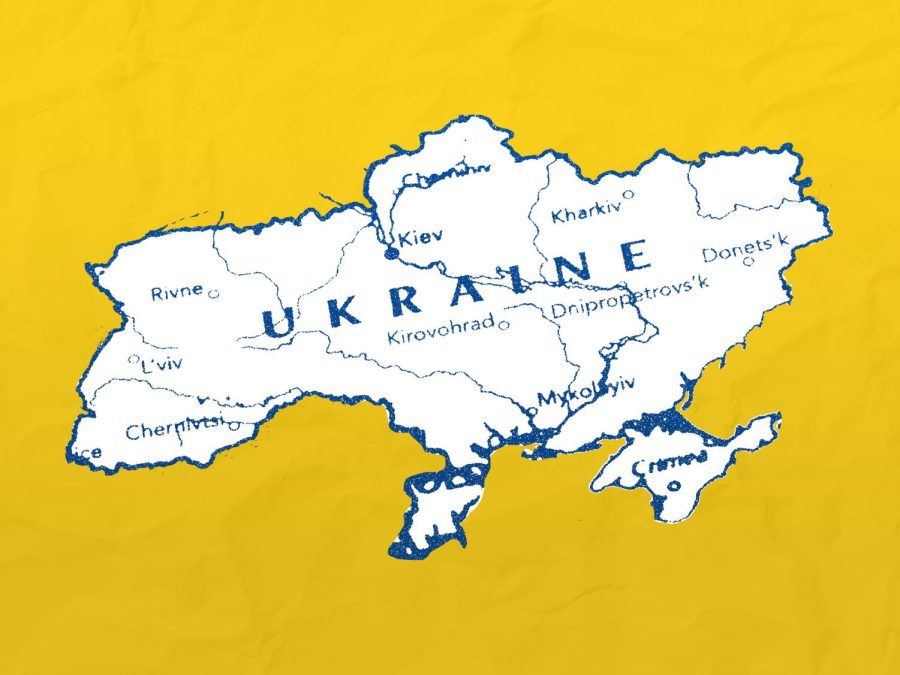 18-year-old Yuliia Zhytelna fidgeted with her tasseled bracelets as she nervously sat in professor Taehyun Kim’s news writing class. She prepared herself to talk about a topic that is currently dominating headlines, one that hits very close to home.

Zhytelna, a native of the Ukrainian capital of Kyiv, was just 17 when she came to the United States with the intention of studying broadcast journalism at CSUN. Born to a Ukrainian father and a Russian Mother, Zhytelna’s eagerness to explain the current situation in her home country to her fellow classmates was quite clear.

“Yesterday, I just realized why I really … like sharing this topic,” Zhytelna said. “After eight years of war, you just thought it’s normal. You know what I mean? You just realize [that] it’s already a part of you … it just became normal.”

As Zhytelna continued her presentation, she stood in front of a map of Eastern Europe and explained the region’s political complexities, its recent history and her thoughts on why Russian President Vladimir Putin would be interested in her country.

In her hour-long presentation, she referenced the war in Bosnia during the 1990s, both the Chechnyan wars, and the Orange Revolution. These are just a few of the events that play a part in the intertwining story of her country.
The 2022 Russian invasion:
In the middle of the night on Feb. 24, Russia launched a full invasion of Ukraine. It started with the Donbas region in eastern Ukraine days before, where fighting between Ukrainian forces and pro-Russian militias has been happening since 2014.

They also invaded from the south through the Crimean peninsula, an area of Ukraine that was annexed by Russia in 2014. Russian forces have made significant gains from the north as well, invading northern Ukraine through Belarus.

Russia and Belarus conducted joint military exercises just over a week ago, after which Belarus President Alexander Lukashenko allowed Russian forces to stage themselves for an invasion of Ukraine.

More recently, Russia captured the now-defunct Chernobyl nuclear power plant and the abandoned town of Pripyat, both of which are just 95 miles north of Kyiv.

Several attacks have been reported in Kyiv, but Ukrainian forces are apparently putting up stiff resistance. Russian forces have not yet taken the capital or any major cities, but are reported to have surrounded several in preparation for an all-out urban assault.

U.S. intelligence officials and President Joe Biden said that an invasion of Ukraine was imminent earlier this month, but to what extent and exactly when was unknown. On Feb. 18, just over a week before Russia fully invaded, Biden said that he was “convinced” that Putin had decided to invade Ukraine.

However, many experts and news outlets also previously reported that a full Russian invasion was unlikely and that Putin only seemed interested in the Donbas region, a historically pro-Russian and Russian-speaking area of eastern Ukraine.

“I could easily be wrong, the guy is unpredictable,” said Kathleen Addison, professor of European and world history at CSUN. “But I think we kind of have this demonization of [Putin] and of Russia as … trying to reconstruct the Cold War and that doesn’t seem to be the case diplomatically.”

Even many in Ukraine did not fully expect an all-out invasion, with no reports of panic-buying or shelter-seeking in Kyiv before the invasion.

On Wednesday, when asked if he felt an invasion was imminent, Ukrainian photographer and Kyiv resident Daniel Kosoy said, “No, and I feel pretty safe. I mean it’s uneasy, but I know that the risk is too high for the Russians to invade and I’m not just going to live my life panicking.”

By Thursday, Kosoy posted a video on his Instagram page urging other Ukrainians to fill their bathtubs with water, buy water filters, and to refrain from posting about the Ukrainian army’s movements.

Kosoy is now trying to flee to Poland, along with over 100,000 fellow Ukrainians.
Where is Ukraine and what’s its relation to Russia?

Ukraine is the second-largest country in Europe in terms of land, the first being Russia. It is located in Eastern Europe, sharing a border to the east with Russia that stretches over 1,200 miles. It borders Poland, Slovakia and Hungary to the west, Moldova and Romania to the south, and Belarus to the north.

Although Ukranian is the official language of the country, many in eastern Ukraine speak Russian and identify themselves as sharing a history with Russia dating back to the USSR.

The origin story of Ukraine is a complicated one. Although the land was once a part of Russia when it was an empire, a growing sentiment of Ukrainian nationalism began to form as World War I came to a close.

This led to a semi-independent Ukraine, but this independence was short lived as Russia became the centralized authority in the Soviet Union. Although Ukraine at this time had its own constitution, its power was limited to domestic affairs within its own borders. Everything else was controlled by Russia, including the military, foreign policy, and major economic decisions.

It was not until the fall of the Soviet Union in 1991 that Ukraine officially became an independent country, but it still had many political and cultural ties to Russia, particularly in the east.

Addison says that many of these ties to Russia have played a major part in the situation that we are seeing today.

“So here’s where stuff gets kind of complicated. [Ukraine] did not want to be part of the Soviet Union,” Addison said. “It was forced to be part of the Soviet Union and one of the claims that Ukraine has made, which is not invalid, is that come 1930-31 Stalin deliberately perpetrated a genocide [of] between 15 and 30 million people based on his policies of collectivization, to try and suppress Ukrainian nationalism.”

While historians and scholars have been unable to determine the exact number that were killed in this genocide, known as the Holodomor, it is estimated to be between 3.5 million and 7 million people.

Addison went on to say that while western Ukraine still resents the east’s ties to Soviet Russia, the east still resents the west for “letting the Nazis roll in” to Ukraine during WWII. This narrative has also been played upon by Putin, who has recently called for the “de-Nazification” of Ukraine as a justification for Russia’s recent invasion.
Ukraine’s independence and the 1990s:
Ukraine overwhelmingly voted for its independence in late 1991, and for the first time began steadily drifting away from its reliance on Russia.

Throughout the 1990s, Ukraine began asserting its independence through a number of political and diplomatic moves. These included joining the NATO-run Partnership for Peace Programme and forming a stronger self-identity as a European state, as opposed to a former Soviet republic. Several other former Soviet territories, including Estonia, Latvia and Lithuania, joined NATO in the years following the collapse of the Soviet Union.

During this time, Ukraine played political teeter-totter between western NATO nations and Russia. This was relatively successful until around the year 2000, when western and eastern ideological divisions became more apparent. This growing turmoil would ultimately lead to the Orange Revolution in 2004.

The Orange Revolution was a hotly contested 2004 presidential election in Ukraine between a Russian-backed candidate who was endorsed by Putin, and a pro-West and pro-NATO candidate. The pro-NATO candidate Viktor Jusjtsjenko ended up winning, but Putin’s suspicions of western involvement only deepened the divide within Ukraine.
What is NATO?
The North Atlantic Treaty Organization was created in 1949 by the U.S, Canada and several Western European countries as a military alliance to stop the spread of the Soviet Union after World War II. It was a huge player during the Cold War, with its intentions of keeping the Soviet Union at bay by assuring military retaliating if any of its members were attacked.

After the fall of the Soviet Union, the military alliance played a key role in conflicts around the world, including the wars in Iraq and Afghanistan.

NATO’s relationship with Russia, and in particular with Putin, were relatively amicable after his rise to power in 2000. Putin at one point even expressed interest in joining the alliance, but his attitude and distrust of the organization soured following the Orange Revolution, and relations between the two gradually devolved over the years.

In a BBC interview with David Frost in 2000, Putin said, “Russia is part of the European culture. And I cannot imagine my own country in isolation from Europe and what we often call the civilized world.”

Ukraine is not a part of NATO, but has repeatedly expressed interest in joining the alliance. This interest has always been a concern of Putin’s.
Who is Vladimir Putin and what does he want with Ukraine?
Putin began his career in the KGB, the Soviet Union’s intelligence service, where he developed contacts with spies, politicians and oligarchs. He used these connections to enter politics, and through the help and influence of oligarchs he eventually became prime minister, one step below president in Russia.

When the Soviet Union collapsed, it created an economic and power vacuum that was quickly filled by a select number of billionaires, who bought up almost all of Russia’s industries. These billionaires became the oligarchy, which had almost total power until the rise of Putin.

Putin has a track-record of finding ways to justify invasions of former Soviet territories, including Chechnya, Georgia, and now Ukraine. Although each intervention has its unique differences, the common pretext is urgent national security issues.

During the second war in Chechnya from 1999-2009, Putin’s popularity and approval ratings in Russia soared as he took a hardline stance following a series of bombings in Russia that killed aproximately 300 people.

When Russian President Boris Yeltsin stepped down, Putin was the obvious choice as a replacement because of his popularity with not just the people, but the oligarchs as well. Pretty soon after Putin became president, his first political moves were to ensure he was the one in power, not the oligarchs.

He imprisoned those that were opposed to him and rewarded the ones that supported him. This also applied to his political enemies, many of whom were imprisoned, disappeared or exiled.

One of the things Putin has repeatedly expressed is that allowing the independence of former Soviet territories that made up the former Soviet Union was one of the biggest mistakes Russia has ever made.

In a recent televised address, Putin explained his version of history in which he implied that Ukraine did not have a right to exist as an independent sovereign nation.

In a press conference on Feb. 24, Biden addressed Putin’s comments and said, “He has much larger ambitions than Ukraine and he wants to, in fact, reestablish the former Soviet Union.” Biden continued, “That’s what this is about. And I think that his ambitions are completely contrary to the place where the rest of the world has arrived.”
Zhytelna on Ukranian independence:
As Zhytelna finished up her presentation, students were able to ask her a variety of questions regarding the history of Ukraine, common misconceptions, and her personal experiences. She noted that many Americans she talked to thought Ukraine was a part of Russia, to which she takes offense.

“I’m Ukrainian, my country is independent. We have our own huge culture and when the world recognizes it as Russian, it’s unfair,” Zhytelna said.” I just feel like that independence for me is just fair. We need to be independent. It’s what we’re supposed to have.”