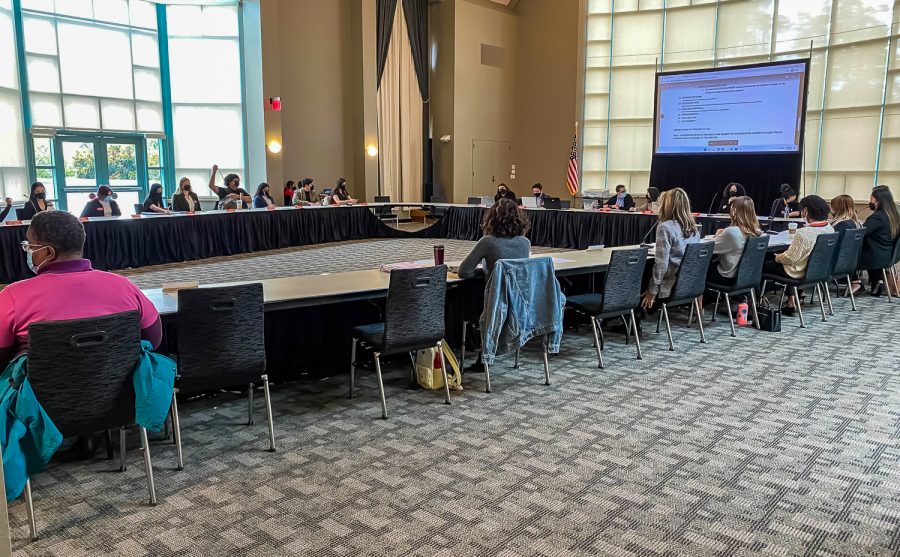 The HEERF money will be used for a new drainage project that will help prevent the center from flooding when it rains by installing fixtures. During the pandemic, the Children’s Center lost revenue and was granted HEERF resources by the federal government, which provided financial assistance to the campus and students as a result of the COVID-19 pandemic.

Before concluding his reports, AS President Jonathan Hay addressed the resignation of California State University Chancellor Joseph I. Castro. Castro resigned on Feb. 17 over his handling of Title IX complaints while he was president of Fresno State.

“As student leaders here, we have to be model students,” Hay said. “We have to create a safe space for students.”

Hay mentioned that the CSU Board of Trustees had a closed meeting regarding the reassessment of Title IX training.
Motions Approved:
AS agreed to allocate $10,000 from unassigned contingency to AS Productions for a new event named CRAMPS week. CRAMPS week will be the celebration of menstrual cycles, and will have a variety of events such as workshops, outside groups that will be talking about menstruation, and menstrual yoga. The women’s research center will be involved to help spread awareness and provide tips.

The senate unanimously approved the appointments of Bhumil Kkykadiya, Karan Sehgal and Mohammed Lnu as CSUN Clubs and Organizations committee members.
Announcements:
CSUN’s Big Show will return in person on March 12 at 3 p.m., but AS is still waiting for an artist to sign the contract.