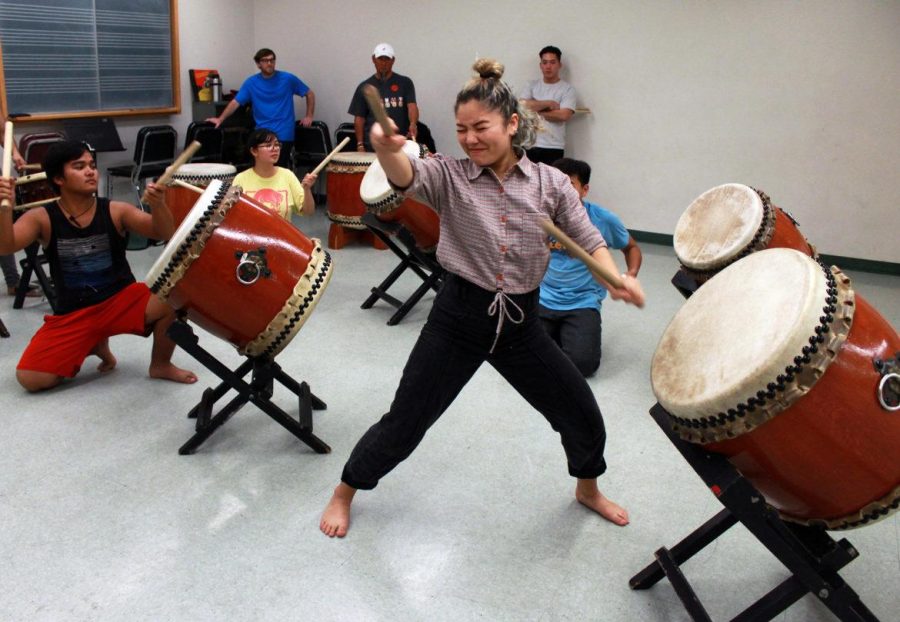 20-year-old Laura Perez, a junior, puts her heart and soul into practice on Thursday, Oct. 25, 2018, inside Cypress Hall 145. Perez has been a member for two years and initially joined to get in touch with her Japanese roots. She considers Jishin Taiko “a club that evokes in me an eclectic range of emotions that I’ve never felt before.”

It takes an intense full-body workout just to keep the rhythm of the drums going. Every hit sends a shock wave of noise that reverberates through the audience’s bones and around the packed auditorium. A musical performance by the Jishin Taiko Ensemble isn’t heard, it’s felt.

The Jishin Taiko Ensemble is the Japanese taiko drumming club at CSUN. The word “jishin” means both “self-confidence” and “earthquake” in Japanese, reflecting the visceral sensory experience that characterizes taiko performances for the audience and performers.

Dang, a senior majoring in kinesiology, joined Jishin Taiko his freshman year after meeting the club organizers at the Meet the Clubs event on campus. He was impressed by the ensemble’s performance during their orientation that night. While he had no prior musical experience, Dang fit in well with the taiko group because of his love for rhythm-based video games and lifelong interest in Japanese culture.

“For me specifically, it just adds that additional love for Japanese culture and an appreciation, not just for the arts of taiko, but also for many cultural arts in Japanese culture, because taiko is very intensive,” Dang said.

While “taiko” simply means “drum” in Japanese, the word has come to represent the style of drumming that has been a part of Japanese culture since the sixth century, where it was traditionally used in religious and military ceremonies. Contemporary ensemble taiko drumming, known as kumi-daiko, was established in 1951 by Japanese jazz musician Daihachi Oguchi, who emphasized the use of a variety of different sized drums.

CSUN’s taiko club initially began as the Nikkei Student Association in 1995, but reformed in 2002 as the Jishin Taiko Ensemble. Joel Mankey, a CSUN music lecturer, acted as its president from 2001 to 2006 before becoming the ensemble’s faculty advisor. Now, Jishin Taiko often collaborates with the Yansa Daiko taiko group at Tokiwa University in Japan, which is the school connected with CSUN’s international exchange program.

During the pandemic, Jishin Taiko shifted to virtual Zoom practices and had members use makeshift drums to simulate the ones in their practice room. The ensemble resumed in-person practices in the 2021 fall semester and continued them until the first three weeks of the 2022 spring semester, when classes were temporarily switched to an online format.

Many of the club’s members graduated or moved on during the pandemic, which reduced Jishin Taiko’s numbers to seven people. They have also had trouble getting new members because its main source of recruiting, Meet the Clubs, has been online. Jishin Taiko’s members feel that Zoom and YouTube do not do their demonstrations justice.

Several of those alumni continue to practice with the club despite having graduated. This includes Laura Perez, who graduated last semester with a double major in Asian American studies and Japanese language and culture. Perez, like Dang, joined Jishin Taiko during her first semester at CSUN when she found them at Meet the Clubs.

Perez served as the president and instructor of Jishin Taiko from 2019 to 2020. She also helped put together the Spring Concert, which is the annual performance by the Jishin Taiko club that highlights songs they learned that year. However, when the COVID-19 pandemic canceled most of CSUN’s events, Perez said she felt stripped of the chance to demonstrate what she had contributed to the club.

“The reason why I’m still connected with this group is because I still know everyone that’s part of it,” she said. “I love Kyle, I want to support him, I want him to be able to produce the best Spring Concert we can produce … and I also miss playing.”

Jishin Taiko will resume the Spring Concert this year and also perform at AniFest in Torrance on April 1. The club also plans to remedy its recruitment challenges with new workshops and demonstrations to supplement its presence at Meet the Clubs.

Perez and Dang emphasized that although taiko is closely connected with the traditional Japanese lifestyle, anyone is welcome to join the club — regardless of musical experience, race, ethnicity or culture.

“Jishin Taiko truly has my heart. I’ve been in the group for so long that I want everyone else to see how special we are,” Perez said. “We are a small group, but I will say we are mighty!”