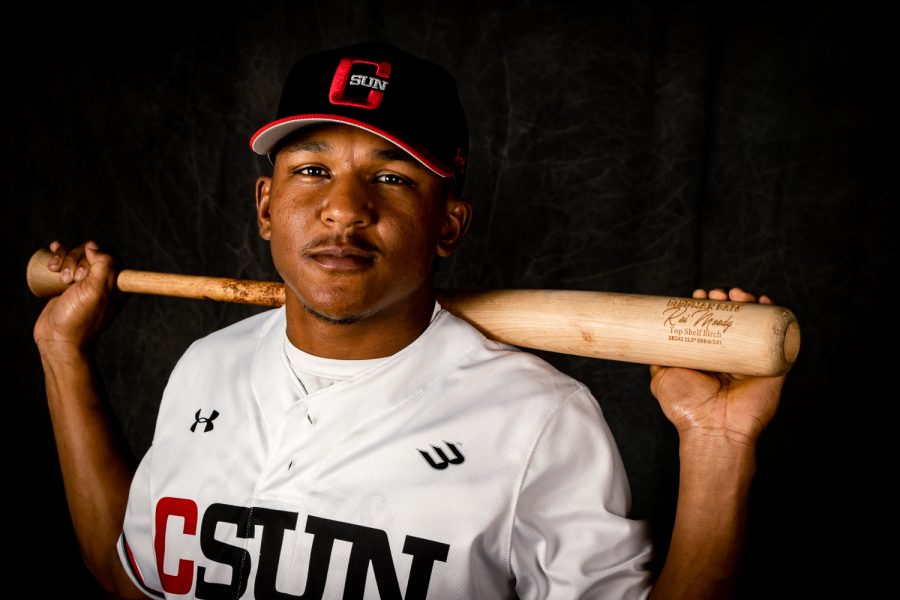 Portrait of Kai Moody taken in the CSUN portrait studio in Northridge, Calif., on Feb. 14, 2022.

Senior Kai Moody steps up to the plate. It is the bottom of the 10th inning, the score is tied at six against UC Irvine and a runner is in scoring position. Moody’s walk-up song “Black and Yellow” by rapper Wiz Khalifa causes Matador Stadium to bump, bleachers to shake and heads to bop while the crowd anxiously waits for what is to come.

The calm and collected Moody is no stranger to the plate. He has been in this position before throughout his baseball career and is coming off his strongest season as a Matador.

Moody won the conference batting title, posting an eye-popping .393 batting average that ranked 24th nationally. Anticipating a hit every time he steps to the plate, crowds cannot take their eyes off him in the biggest moments in the game.

“I’m very proud of him with the consistency he showed over the 36 games he played,” CSUN head coach Dave Serrano said. “When you play with the energy level that he does every day, it’s hard to sustain that over the course of a season, but Kai proved to me he can do that.”

From humble beginnings in San Francisco, California, to a walk-on junior at CSUN, Moody reflects on how his love for the game came to be.

Moody received strong support from his parents, especially from his father Donnell who was devoted to his son’s passion. Donnell was always in Moody’s ear motivating him to do great not better, as it helped him develop a strong work ethic.

“The advice my dad would tell me is: ‘If I did a good job, I’ll say you did an average job. If you did a great job I’ll tell you did a good job,’” Moody said. “He always told me to never be content, always strive for more.”

Not many schools in the city provided opportunities for kids to hone their skills and dedicate time to their sport.

San Francisco culture does not support the sport of baseball and does not like kids playing baseball, according to Donnell. He goes on to explain that he even built a 3,500 square-foot outdoor batting cage for neighborhood kids to play ball, and created a travel team so Moody could play at a higher level.

“I moved heaven and earth to make sure he got the ability and opportunity to do it,” Donnell said. “That was dedicating time to him and coaching him and his friends up until U-18.”

Competition among Little League teams and public high schools was lackluster, and exposure was hard to come by if you did not play for a private school, Moody mentioned.

“Baseball in the Bay Area isn’t great, especially if you go to a public school like I did,” Moody said. “Competition wasn’t great, and neither was the exposure. I just knew I had to do what I had to do and I’d get to where I wanted to be.”

A utility player for the Matadors, Moody has started 19 games at second base, 14 games as an outfielder and three games at third base. Moody is an avid fan of the New York Mets and lists former Mets star Jose Reyes as an MLB player he grew up idolizing and modeling his game after.

While Moody grew up playing shortstop because of Reyes, he made the transition to second base where he feels most comfortable playing due to the physicality of that position.

Moody’s former coach at Cabrillo College, Bob Kittle, who he keeps close relations with, raves about his qualities not only as a player but also a person.

“Kai is an amazing tough kid. He also has a great gregarious personality, he’s infectious to be around,” Kittle said. “The guy is a winner, he just wants to win and he creates that feeling with everyone else around him.”

The strong support system in place accompanied with strong performances on the field has inspired Moody to pursue his goal of one day making the MLB.

“Batting second for the Mets, I would love to see that,” Donnell said. “I want him where he wants to be, and that’s playing professional baseball.”

Outside the field, Moody enjoys spending time with his friends, working out at the gym and playing video games.

When it comes to stepping up to the plate, bottom of the 10th inning and the game on the line, Moody swings for the fences. Walk-off homerun. Ballgame.