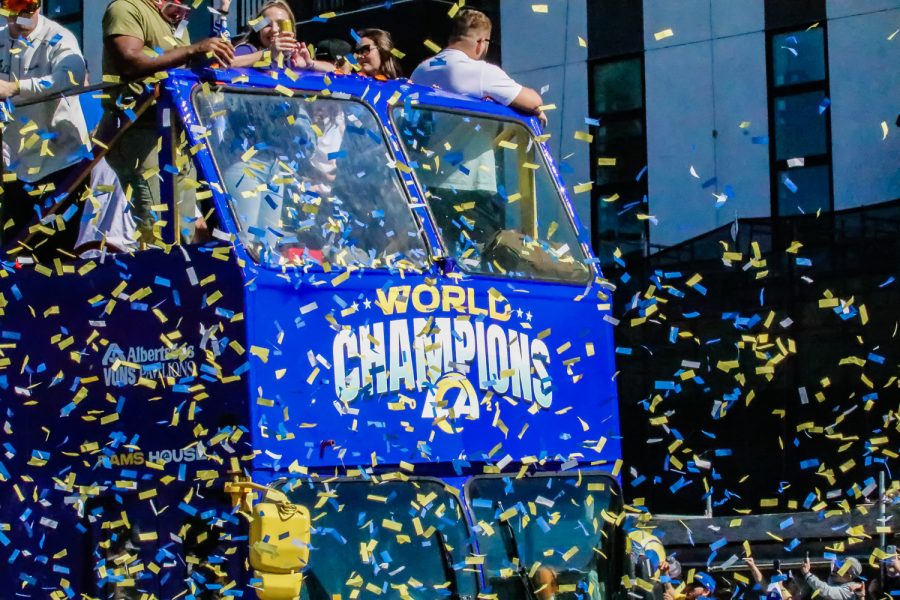 The Los Angeles Rams get their first championship in LA, and ride through Figueroa Street to celebrate it with their fans on Feb. 16, 2022, in Los Angeles, Calif.

The win wouldn’t have been possible without quarterback Matthew Stafford leading the Rams through a 15-play drive that ended with Super Bowl MVP Cooper Kupp catching the go-ahead touchdown in the closing minutes. Defensive tackle Aaron Donald sealed the game by pressuring Bengals quarterback Joe Burrow on fourth down.

The Rams celebrated their monumental win Wednesday afternoon as fans lined Jefferson Boulevard and Figueroa Street. Thousands packed the lawn in front of the Los Angeles Memorial Coliseum, the former home of the Rams, as people flocked to the parade from across Southern California.

Fans were finally able to experience a championship parade, having lost that opportunity for the Dodgers and Lakers championship runs in 2020 due to the COVID-19 pandemic.

Phillip Padilla came from Coachella, California, with his wife and children to celebrate the first Super Bowl won by the Rams in LA. The Rams first ever championship was in Super Bowl XXXIV, when they were the St. Louis Rams.

“We’ve waited so long for this,” said Padilla, a fan of the Rams since he was born in 1961. He believes this championship will grow the fan base and strengthen it as the years go by.

Despite fans showing their support Wednesday, the Rams have a long way to go before they mean as much as the Lakers and Dodgers for the city of Los Angeles. After the team left for St. Louis in 1994, Angelenos were forced to root for teams from across the country.

The Oakland Raiders and San Francisco 49ers became popular teams in LA. A generation of young football fans were left without a team to root for in LA for two decades. Many hope this Super Bowl-winning team can inspire the next generation and get back the fans they lost.

“It’s going to mean a lot to them, just like the 1988 Dodgers World Series meant to me as a kid,” said Elias Elizondo, from San Fernando, California, about his children seeing the Rams winning.

His children were dressed in custom Rams jerseys with their last name on them. The sight of children was abundant throughout the parade. Children of all ages were decked out in Rams gear, and many were playing catch with footballs.

This championship is important for the city of Los Angeles because of the impact it will have on future football fans. Though average home attendance for this season was in the top 10, many road teams had legions of fans come to SoFi Stadium. An example included the NFC Championship game, as a red sea of 49ers fans came to support their team.

Fans at the parade were all in agreement that this city needed this championship to bring together not only Rams fans but the people of Los Angeles.

“I’m LA born and raised, so it’s really good to know that the city … needed this,” said Inglewood resident Kristen Sampson. She, along with her son, hope that the Rams winning stays a tradition for the city.

Rams coach Sean McVay repeated the lines, “Run it back! Run it back!” Players like Kupp and Donald agreed with that notion during their speeches at the parade. The Los Angeles Rams have a shot at something special: winning back-to-back championships.

No NFL team has successfully defended their championship since the Tom Brady-led New England Patriots in the early 2000s, when they won both Super Bowl XXXVIII and Super Bowl XXXIX.

If the Rams win next year’s Super Bowl in Glendale, Arizona, the city of Los Angeles will talk about these moments for the rest of their lives. Only time will tell if this year’s Rams team can shift a city to start rooting for them.

Though it may take years or even decades, this Super Bowl win will mark a shift in Los Angeles and drastically change the landscape of football here in the City of Angels.