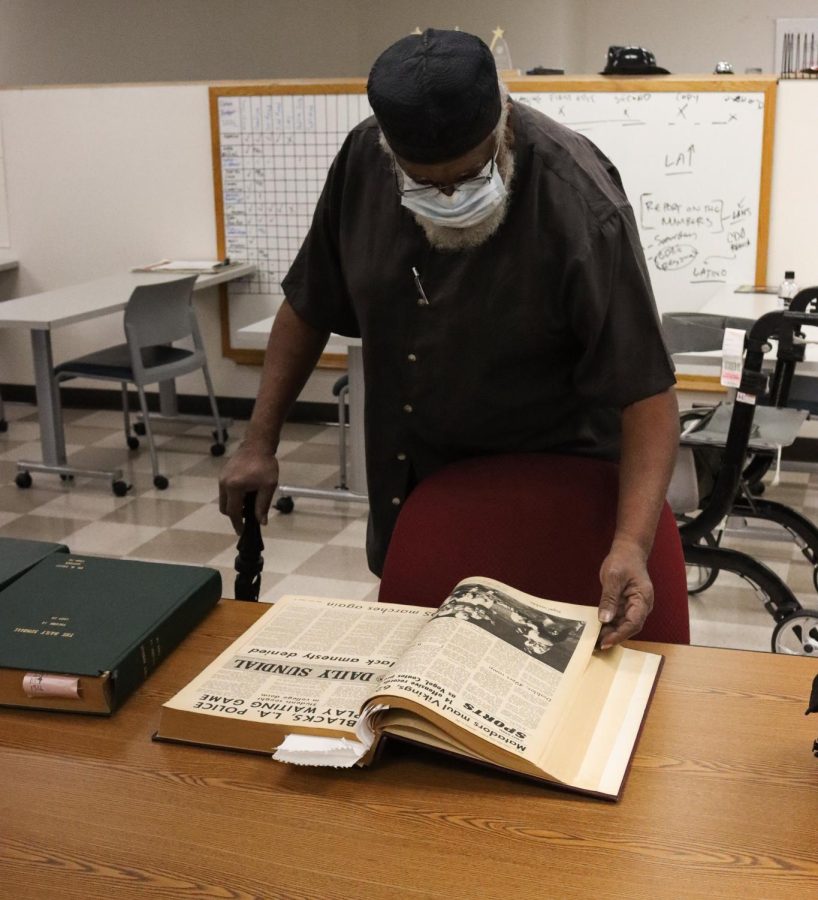 Zedar Broadus takes a walk down memory and in the Sundial newsroom in Northridge, Calif., on Wednesday, Feb. 2, 2022

On a Wednesday morning he showed up 20 minutes early for his interview, pleasantly chatting with reporters in the newsroom before the interview began. A thoughtfully color-coordinated outfit was accompanied by a uniquely carved cane he held between his hands. His muted but slightly boisterous laughter was infectious as he made small quips with the reporters.

His name is Zedar Broadous, a reverend by trade and CSUN alumnus from before the name change of San Fernando Valley State College to California State University, Northridge.

At 73 years young, Broadous has come a long way and seen even more. He is a Navy veteran and longtime resident of the San Fernando Valley.

Broadous wasted no time jumping into answering the interview questions posed to him, and made a point to circle back and connect thoughts after every detailed answer.

His story begins in the past, as most always do. The year is 1968, and students had taken over the administration building in protest of an alleged assault on a Black football player named George Boswell. Broadous recalls a call going out on the usual communication channels used back then for support. A few days after the incident, he came to what was then known as the “open forum,” a stage area used for gatherings that has since been converted to the campus bookstore.

“What occurred was because of the great turnout of not only students but the community,” said Broadous. “Yet also a great turnout of the LAPD. Quite a few of us ended up going to jail during that period of time on more than one occasion.”

As one of 11 children in his family, he followed in his father’s footsteps and became a minister. He takes his ministry and leadership roles quite seriously, as he has served on several Black committees and boards in addition to serving as president of the NAACP Pacoima chapter.

A moment of pause before he shared his view of what Black History Month means, he squinted his eyes for a moment to find the beginning.

“[It is] commemorating the successes of those [who have come] before me have had, so that we are closer to a better society than we were,” he said. “And then you realize that there is still hope, but that hope comes at a price.”

He went on to say that along with commemoration there is celebration and continuation. Celebrating the wins and recognizing that for the Black community, the struggle continues.

His hands, though a bit weathered, showed the passion and belief he holds as he used them in conversation. When he is particularly passionate about a statement, he makes a point to emphasize his thought with an accompanying tap on the desk.

Broadous speaks on a great many topics as a leader in the San Fernando Valley’s Black community; and Black History Month, in addition to the responsibilities of the community, are a few of those topics he’s quite devoted to.

“Why not spend a couple hundred dollars per kid, get school supplies [and] help a young lady or young man have the opportunity to tour NASA[‘s Jet Propulsion Laboratory],” said Broadous. “So that they can see that just because you’re in this circumstance [of struggle] right here today doesn’t mean that’s where you have to be tomorrow.”

He mentioned that he was once a student fortunate enough to receive the opportunity to attend college from a chance given to him by the Equal Opportunity Program.

Broadous paraphrased the allegory of “Plato’s Cave,” a story of a lost people living in a cave afraid of the unknown and quite literally shown the light, to emphasize the need for kindness and knowledge being passed within the community.

He got emotional when speaking on his prayer for the community, making a joke to distract from the brief glimpse of vulnerability.

“We have to shine a light on those inequities. Good people have to do that, and sometimes it’s painful,” said Broadous. “I see the progress, and I see the change here on campus. But as with anything else, we can do more. My prayer is that we can shine that light on what this campus is doing.”