CSUN baseball gives UCLA a run for their money 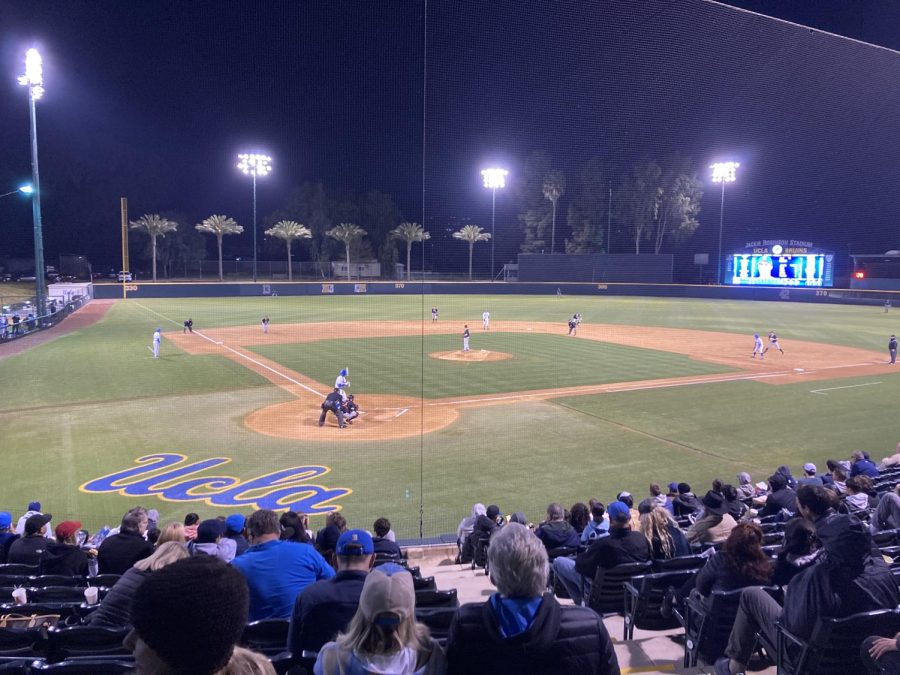 Starting the season off against a team that finished fourth in the Pac-12 last year might not seem like the greatest idea at first, but CSUN’s performance against UCLA over the weekend showed that the Matadors are not to be underestimated.

Although CSUN lost two of the three games in the series, including their opening game, they were able to take one game and battle the Bruins tooth and nail almost every step of the way.

UCLA was, however, relentless and the series showdown would ultimately climax in a game three extra-innings standoff that ended in fantastic walk-off fashion.
Game 1
As the Bruins took the field at Jackie Robinson Stadium for game one, most of the estimated 1,000 people in attendance that night had no idea that UCLA already had the advantage.

After the game, CSUN coach Dave Serrano was not shy about highlighting the Matadors’ disadvantage.

“As I’ve said to the team, and I’ve coached for a long time. There’s a huge disadvantage for a program that doesn’t get to play under the lights, or practices under the lights, and gets to play their season opener against a program that has good arms,” said Serrano. “I’d love to have lights, but don’t have enough flashlights at my house to light up our stadium.”

It was clear the Matadors weren’t seeing the ball well, amassing only one hit in the first two innings of play.

The second inning was when the Bruins decided to draw first blood. Third baseman Kyle Karros hit an RBI triple into the gap in center-right field. The next batter, second baseman Ethan Gourson, drove him in with a single, putting UCLA up by two.

CSUN was not able to answer back, which led to the Bruins opening the floodgates to an offensive explosion in the fourth inning. Gourson led off the inning by shooting a bullet to Matadors second baseman Mason Le, who was not able to glove it. It would go down as an infield single.

This would just be the beginning of an onslaught that CSUN would not recover from. By the end of the fourth inning the Bruins would record five base hits, two stolen bases, a sacrifice bunt, a sacrifice fly-out, a batter hit-by-pitch, a walk, a pitching change and four runs scored. By the time starting pitcher Blaine Traxel was relieved, he had thrown over 80 pitches.

“There hasn’t been many times where Blaine’s gone out there and thrown 84 pitches in four innings,” Serrano said. “That’s just a credit to their offense.”

The Matadors would not be able to score until the sixth inning, with outfielder Andrew Sojka driving in two runs with a double to left-center. This would be the only time that CSUN put any runs on the board.

UCLA would go on to win the game 9-2.
Game 2
With game two starting at 2 p.m. on Saturday, there was no excuse for the Matadors heading in, but they didn’t need one. At least, not at first.

The Matadors were able to capitalize on the solid defense, drawing first blood in the fourth inning. A sacrifice fly by first baseman Joey Kramer drove in Le, who had advanced to third on a sacrifice bunt by Kai Moody.

The Matadors’ offense continued to drive runners home, scoring at least one run per inning over the next four innings, which included two home runs. One was a solo by Moody in the fifth inning and another solo shot by Kramer in the eighth.

Sodersten was eventually pulled after the sixth inning and relieved by Gavin Lizik. Lizik and reliever Lucas Braun were able to continue the shutout on the mound, and by the bottom of the ninth inning the Matadors were winning 6-0.

It was at this time that CSUN put in Kyle Hoskins, who usually plays the role of a reliever.

The Bruins were not fooled by anything Hoskins was throwing at them, and a UCLA team that hadn’t scored a run the entire game began to answer back.

Bruins first baseman Daylen Reyes began the inning with a single down the left side on a 1-2 count. The next batter, Goursen, was able to draw a four-pitch walk, to which Bruins center fielder Malakhi Knight capitalized on by hitting a single to left field that loaded the bases with no outs.

UCLA decided to bring in Jack Holman as a pinch-hitter. Holman stepped up to the plate and hit a double to left-center field, clearing the bases and bringing the score to 6-3 with no outs.

It was at this time that Serrano had decided that Hoskins was done and brought Blake Schriever in to close out the situation.

Schriever did not fare much better, loading the bases with a single and a walk. The Matadors were able to luck out when Michael Curialle grounded out to Schriever, which resulted in a double play that avoided an additional run.

Bruins infielder Jake Moberg then popped out to second base, finally ending the game and securing the save for Schriever.

“I’m happy for our team that we got that first win of our season against a good UCLA team. I was very proud of Blake Sodersten and how he responded today,” Serrano said. “I felt he pitched with the best attitude in my two-plus years of being around him.”
Game 3
The rubber match of this series showcased just how evenly matched these two teams really are. The circumstances of the game showed similarities to game two, but were now inverted. This time it was UCLA who gained an early lead, held it, and shut down the Matadors’ offense. At least until the ninth inning.

The Bruins scored in the first inning after Curialle got on base with a single. He then advanced to second due to a wild pick-off throw, and was then driven home on an RBI single by UCLA’s cleanup hitter and first baseman Jake Palmer.

Throwing errors would also contribute to UCLA’s next run in the fifth inning. Bruins outfielder Kenny Oyama initially reached first on a fielder’s choice, but then advanced to second on another failed pickoff attempt by CSUN starting pitcher Ryan Wentz. Oyama then scored when he attempted to steal third and catcher Sebastian Garcia threw wildly to third base. CSUN would finish the game with four errors.

By the top of the ninth inning, the Bruins were up 3-0. With the Matadors down to their final three outs, it was do or die.

Le was walked on five pitches, and advanced to second on a fielder’s choice. Moody was then walked and Kramer would pop-up to second base.

With two outs and two runners on, Sojka hit an absolute bomb on a 0-0 count over the center field wall to tie the game. UCLA would not be able to answer in the bottom of the ninth so the game went into extra innings.

The game went to the 13th inning, with both teams not showing any willingness to relent. Both teams would come close to scoring, but could not drive anyone home. UCLA left six runners on base in extra innings alone, and CSUN would strand three.

In the 11th inning, Serrano brought in Braun to hopefully clinch the save for the Matadors, if their offense could produce. Braun would ultimately be the one who threw the final pitch of the game.

With a man on and no outs in the bottom of the 13th, Gourson unleashed on the first pitch he saw and drove it over the left field wall to walk it off for the Bruins.

“It was a fastball,” said Braun. “I thought it was down in the zone, but I don’t really know exactly where it was. But he did his job, let the ball travel and put a good swing on it, and what happened, happened.”

Serrano said that playing a challenging team like UCLA was all part of the plan and that some of the things that transpired during the series, such as having to hold onto a six-run lead in game two, will make the team better going forward.

“We could have played a school this weekend that might have been a lot easier, and a lot of things that came out would have been brushed under the rug because we were so much better than them,” said Serrano. “That’s why I scheduled tough opponents, because I want our guys to go up against the best so that we can continue to get better as we go.”

CSUN’s next series against Pacific will be played at home, with game one starting at 2 p.m. on Feb. 25.