Matador of the Week: Atin Wright 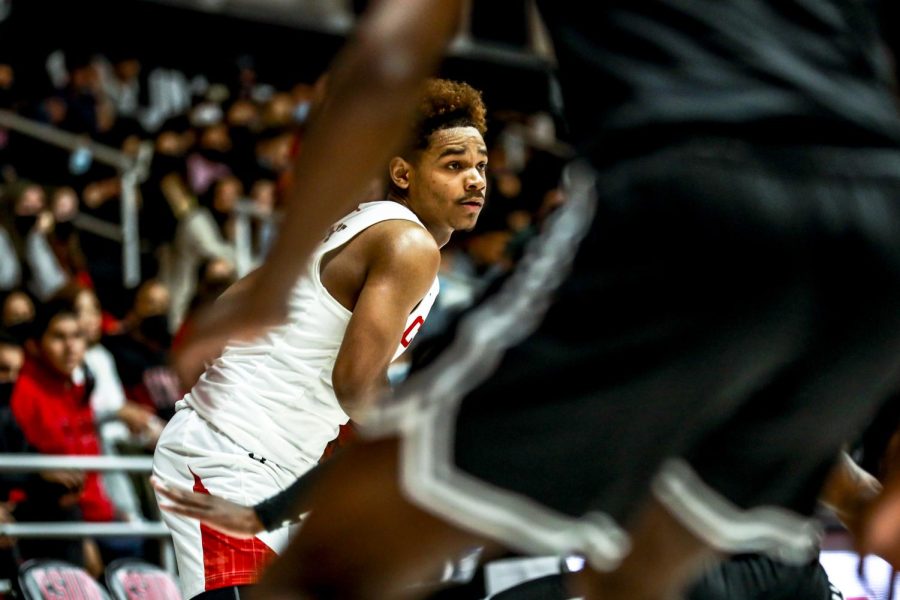 Atin Wright makes a play on the court inside The Matadome. CSUN men’s basketball team faced Long Beach State, who beat the Matadors 72-59 in Northridge, Calif., on Thursday, Feb. 17, 2022.

Sophomore guard Atin Wright earned this week’s Matador of the Week by having an impressive two-week stretch of games. Last week the Matadors went on a two-game win streak with Wright playing a key part. This led Wright to getting a Big West Conference Player of the Week award. He then backed those performances up with an exceptional game against Cal State Fullerton on Feb. 19, where he tied his career high in points with 28.

Wright scored with impressive efficiency in those two games by shooting 14 of 30 from the field, 10 of 16 from the 3-point line, and eight of 13 from the free-throw line.

“I think I’ve gotten better with my shot selection, because my percentages are going up, and I think I’ve just been becoming more of a mature player,” Wright said.

Wright has been coming up big-time for the Matadors as of late, especially after CSUN senior guard Darius Brown II suffered an injury earlier in the season.

“Luckily [Brown’s injury] didn’t deflate the team too much, because we knew we still had enough pieces to work with,” Wright said. “It kind of motivated us to push harder, but we’re still starting to slowly get better.”

Although the Matadors were dealt a decisive loss by Long Beach, they were able to put up a good fight against the Fullerton Titans.

Wright played a big part in the game against Fullerton. Wright tied his career high of 28 points and kept the game close. However, CSUN narrowly lost, with the final score being 81-73.

Wright explained how perseverance is the key to the Matadors’ future performances for the season.

“We just have to persevere, honestly,” Wright said. “A lot of things have happened this season and we’ve been having to adjust to things, but I think our losses for this season will definitely motivate us for whoever we have to face in the upcoming tournament.”

The Matadors will be playing in the 2022 Hercules Tires Big West Basketball Championships that begin on March 8. Wright sees this tournament as a big way to show how far he and the Matadors have progressed throughout the season.

“I think once the time comes, we’ll be ready. Everybody is locked in and everybody is playing the best we can,” Wright said. “I think we have a good chance for this tournament — we might have a lot of losses in the conference, but I think that when we’re playing really well, teams have a problem with us.”

Wright is excited to see where the team goes and how much more progression he’ll make toward becoming the player he wants to be.

“I think I still have more to prove — I want to get to the point where we’re beating these teams and I’m still going crazy, and they just can’t do anything about it,” Wright said. “I’m just going to stay in the gym and keep at it, because I already have the confidence, and once everything comes easier to me, it’ll start to get worse for the other teams.”

CSUN is looking to break its losing streak as they face off against UC Riverside (14-9, 7-4) on Feb. 24 at the SRC Arena in Riverside.