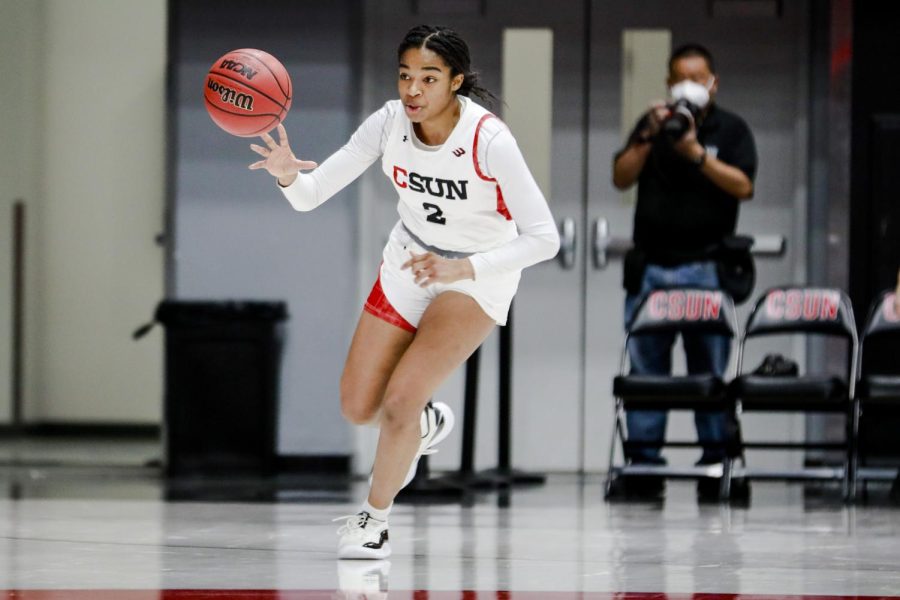 Sydney Woodley dribbles up the court at The Matadome during a CSUN home game in Northridge, Calif., on Jan. 29, 2022.

CSUN women’s basketball took on UC Santa Barbara for the second time this season on Tuesday night. The Matadors held a 17-point lead in the third quarter, but a sudden collapse on both sides of the ball let UCSB back into the game.

The Gauchos outscored the Matadors 44 to 18 in the second half of the game. CSUN went scoreless for eight straight minutes in the third quarter, until a 3-pointer from guard Anaiyah Tu’ua with 50 seconds left pushed the Matadors lead back to 10.

UCSB went on a tear in the fourth and stole the game from CSUN, winning 63-51.

The Gauchos have beaten the Matadors in both of their matchups this season. The Gauchos were led by their All-American forward Ila Lane, who scored 14 points and grabbed 11 rebounds, five of which were offensive rebounds.

“You knew they were going to lean into their big All-American in Lane and we didn’t do a great job of accounting for her,” Carlene Mitchell, CSUN interim head coach, said.

Rebounding told a big part of the story for CSUN, as the Matadors were outrebounded 43 to 20, and 14 to 3 on offensive rebounds.

“The big thing was that we could feel the rhythm in the offensive rebounding,” Mitchell said. “In the second half when we needed to get a stop they would get their second and third opportunities.”

In the second quarter CSUN scored 19 points. The rest of the game they were only able to score a combined 18. The Matadors went into halftime with a 14-point lead, having forced 14 turnovers and scored 18 fastbreak points. In the second half, the Matadors forced six turnovers but committed 10.

The Gauchos scored 29 points in the fourth quarter. UCSB shot 15-24 from the free-throw line, with 13 of them coming in the final period. Mitchell noted that if they want to win games, they can’t allow that many free throw attempts and have to get to the line themselves.

Guard Jordyn Jackson led the way for the Matadors with 19 points, four assists and two steals on an efficient 8-12 from the field. CSUN had to lean on their starters a lot in the game, with only four players being able to get in the scoring column and three players playing at least 32 minutes.

“I have no words for this, it’s very frustrating,” Jackson said. “I think all of us are frustrated. The only thing we can do now is move forward and work harder to get this next win.”

The Matadors are now on a four-game losing streak and have one final regular season game against Hawaii before the Big West Tournament starts on March 8.