Biden delivers State of the Union amid foreign and domestic crises 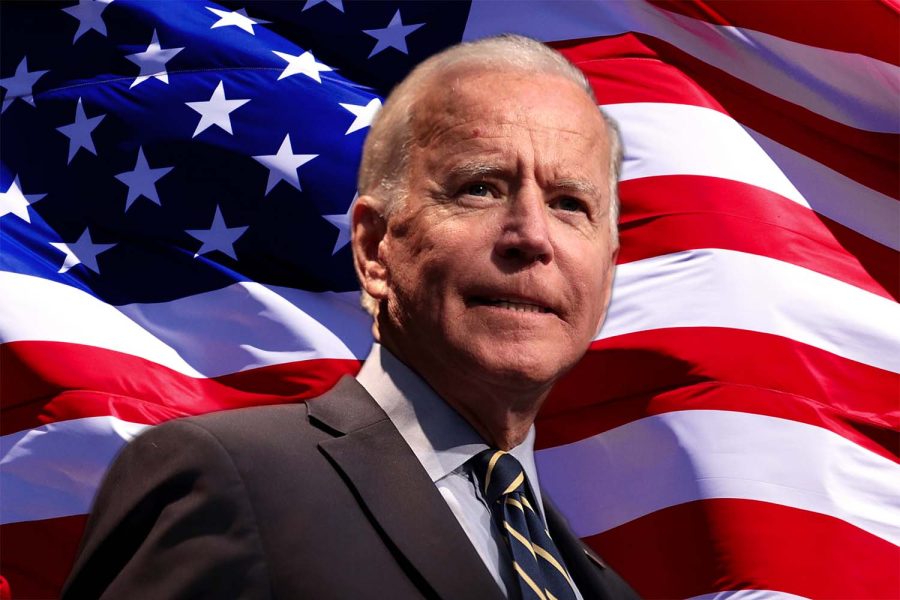 Photo illustration by Kaitlyn Lavo. Photograph by Gage Skidmore. President Joe Biden speaks with attendees at the 2019 Iowa Federation of Labor Convention, hosted by the AFL-CIO at the Prairie Meadows Hotel in Altoona, Iowa, on Aug. 21, 2019.

President Joe Biden used the bully pulpit to discuss his domestic agenda in his first State of the Union address on Tuesday night.

With the mask mandate having been lifted inside Congress just days prior to the address, there was a sense of normalcy inside the House chamber.
Standing with Ukraine
Before the speech, small Ukrainian flags were given out to everyone entering the Capitol as a symbol of the United States standing with the Ukrainian people.

Ukraine’s ambassador to the U.S., Oksana Markarova, was invited as a guest by first lady Jill Biden.

More than 10 minutes were spent addressing the current Russia-Ukraine conflict. Biden denounced Russian President Vladimir Putin for rejecting diplomacy and accused him of a “premeditated and unprovoked” attack on Ukraine.

“He thought the West and NATO wouldn’t respond,” Biden said. “And he thought he could divide us at home. Putin was wrong. We were ready.”

The latest Russian invasion began on Feb. 24, in the Donbas region of eastern Ukraine. The two nations have been fighting since Russia annexed Crimea, a part of southern Ukraine that borders the Black Sea, in 2014.

Biden announced that the U.S. will close off American airspace from Russian aircraft, joining other NATO members who have banned Russian flights into their countries over the past week.
Funding the police
Biden also called for the continued funding of law enforcement, which received applause from both sides of the aisle and some boos. Rep. Cori Bush, D-Mo., a member of the six-person “Squad” of progressive Democratic House members, did not agree with Biden’s statement.

“With all due respect, Mr. President. You didn’t mention saving Black lives once in this speech.
All our country has done is given more funding to police. The result? 2021 set a record for fatal police shootings,” Bush said in a tweet. “Defund the police. Invest in our communities.”
Inflation
Biden announced that the U.S. will release 30 million barrels from the Strategic Petroleum Reserve in order to combat rising gas prices. Thirty other countries have also stated that they will release a combined 60 million barrels of their own.

To tackle record price hikes, Biden pledged to get prices under control and asked corporations not to lower wages, but to lower costs.

“More infrastructure and innovation in America. More goods moving faster and cheaper in America. More jobs that you can earn a good living by in America,” Biden said. “Instead of relying on foreign supply chains, let’s make it in America again.”

There was no mention of Build Back Better — Biden’s infrastructure plan he ran on during his presidential campaign that failed to pass the Senate — but Biden referred to his new four-point plan as “building a better America.”

This plan aims to cut the cost of prescription drugs, combat climate change to reduce energy costs for families by an average of $500 a year, cut the cost of childcare in half, and not increase taxes on anyone making under $400,000 a year.

The new proposal comes at a time when Americans are facing the highest level of inflation since 1982, with an increase in prices of 7.5% in 2021, according to a consumer price index report.
COVID-19
A new program set to combat COVID-19 called “Test to Treat” will be available, enabling people to get tested at a pharmacy. If they test positive, they can receive antiviral pills on the spot at no cost.

The antiviral treatment from Pfizer called Paxlovid reduces COVID-19 hospitalizations and deaths by roughly 90%, according to the Food and Drug Administration.

“We’ve ordered more of these pills than anyone in the world,” Biden said. “And Pfizer is working overtime to get us one million pills this month and more than double that next month.”

In his address, Biden also continued to call for the American people to get vaccinated as a way to combat the virus.

More than 950,000 people in the U.S. have died from COVID-19, according to the Centers for Disease Control and Prevention.
Biden gets heckled
Biden also discussed immigration reform, sharing his plans “to secure the border and fix the immigration system.”

This was not the only outburst of the evening.

Rep. Lauren Boebert, R-Colo., shouted, “You put them in [coffins], 13 of them,” when Biden was addressing cancer in veterans caused by the toxic burn pits in Afghanistan and Iraq.

Boebert’s outburst appeared to be referring to the 13 American troops who lost their lives last year in an ISIS attack during the withdrawal from Afghanistan. She immediately received backlash from members inside the chamber.
Other announcements
Toward the end of the speech, Biden introduced his “Unity Agenda for the Nation” — a proposal that would address the opioid epidemic, provide resources for children’s mental health, make sure veterans receive benefits and health care, and cut cancer deaths in half over the next 25 years.

“We are stronger today than we were a year ago,” Biden said. “And we will be stronger a year from now than we are today.”