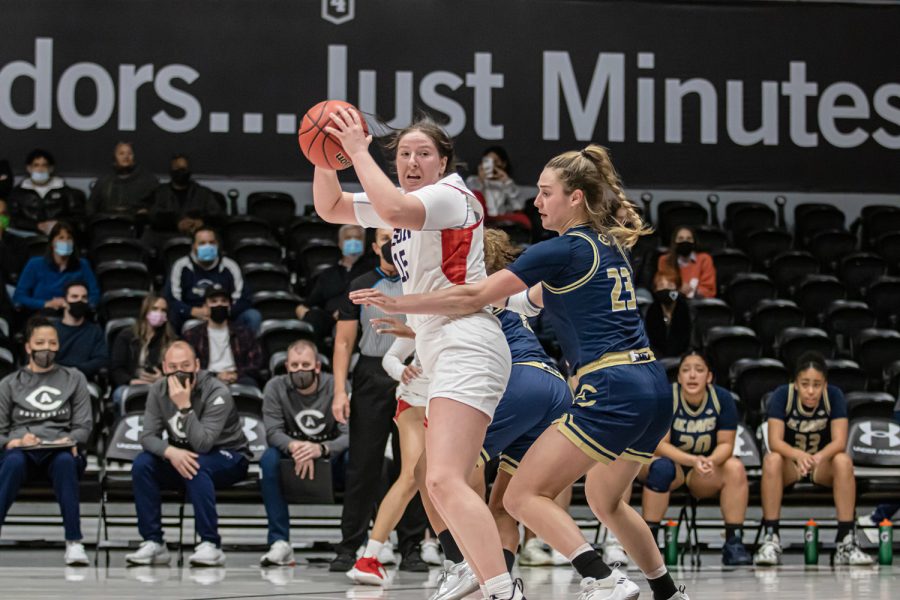 Tess Amundsen trying to get past the defense on Feb. 24, 2022, in Northridge, Calif.

CSUN’s most recent loss to the Aggies marks the sixth straight loss the Matadors have suffered to UC Davis since Jan. 24, 2019.

This game was a rollercoaster from start to finish. CSUN started attacking the rim right away in the first quarter, with CSUN guard Meghann Henderson grabbing a steal from the opposition and laying it in for the first points of the game. Henderson then added a 3-pointer to the score shortly after, which helped CSUN gain a 7-2 lead during the midway point of the first quarter.

Henderson attributed her in-game success to the close bonds she has with the team.

“We’re always there to pick each other up, regardless of the situation, and that’s what I really like,” Henderson said. “We just go hard all the time, and we’re always locked in.”

The Matadors finished the first quarter with a score of 15-8, with impressive plays like a pivot fadeaway jump shot by junior Tess Amundsen and fast dribble moves by junior Jordyn Jackson, which stunned the defenders and helped CSUN retain their lead.

However, disaster struck the Matadors in the second and third quarters.

CSUN was able to keep their lead for most of the second quarter, but Davis guard Mazatlan Harris set the tone for the Aggies by making a wide-open 3-pointer. The Aggies would go on an 11-point run, losing the Matadors their 21-15 lead. The Aggies gained a lead of 26-21.

The quarter ended with a successful 3-pointer from Henderson, which helped CSUN shorten their deficit and come within three points of the Aggies’ 29-26 lead.

The third quarter wasn’t much different for the Matadors. The Aggies displayed proficient offense and were able to make seven of their 11 shots for that quarter, and at one point went on a 12-point run. CSUN did everything they could to fight back, but ultimately ended the quarter 13 points behind the Aggies with a score of 46-33.

During the second and third quarters, Davis made 38 points compared to CSUN’s 18 points. Furthermore, the Aggies made 21 of their points from behind the 3-point arc.

Amundsen said that rebounding was a big reason CSUN couldn’t hold onto their lead.

“It was definitely a big part of it. It’s a game of mistakes like our coach says, but us not securing those rebounds were big on us tonight,” Amundsen said.

CSUN definitely missed out on the boards by clocking in only 25 rebounds compared to Davis’ 40 rebounds.

Despite this, the Matadors weren’t going down without a fight.

CSUN tried to pick up the pieces in the fourth quarter and went on the attack once again. Henderson, Jackson and Amundsen were able to scrap some points together and finished the game with two successful 3-pointers from Henderson, which ended the score 58-50 in favor of the Aggies.

With this game in the past, the Matadors now look toward the future with the upcoming Hercules Tires Big West Basketball Championships tournament on March 8.

“I’m really excited. I think our team is battle-tested in close games and I don’t think everybody has had those opportunities [playing in big tournaments],” Amundsen said. “When it comes to the tournament, we’re already experienced with those close and tight games, so that will give us an edge going in.”

The Matadors will host UC Riverside (10-10, 7-6) at The Matadome on Feb. 26, where they hope to collect some wins before the tournament.

“I feel good about Riverside. Again, they beat us last time at their house, but I think if we do what we need to do and play well defensively and offensively, then we’ll be straight,” Henderson said.