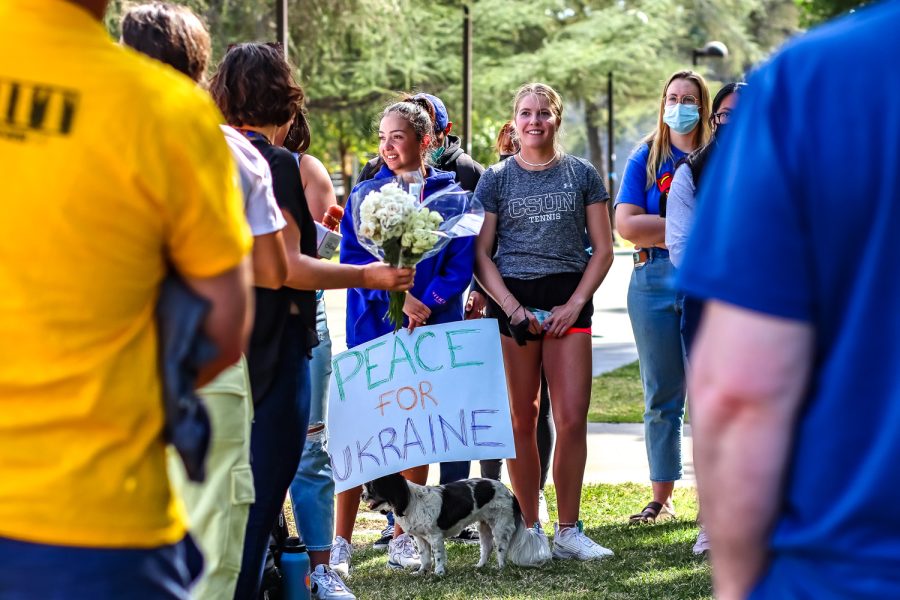 CSUN students and staff members come together outside the University Library for a daytime vigil to honor those who lost their lives to the violence in Ukraine on March 3, 2022, in Northridge, Calif.

CSUN students, faculty and staff met in front of the University Library on Wednesday afternoon for a protest dedicated to spreading awareness and condemnation of the Russian invasion of Ukraine.

Yuliia Zhytelna, a Ukrainian student at CSUN, and assistant journalism professor Daniela Gerson helped organize the protest. Zhytelna opened the protest by showing her appreciation toward those in attendance and giving a brief explanation of the current situation in Ukraine. She expressed disbelief that war could still occur in Europe in the present day.

“It’s really hard to see the news and videos around the country about what crimes [are] happening now,” Zhytelna said. “It’s just unbelievable that this is happening in the 21st century, in the middle of Europe, with a really peaceful country. It’s just really hard to understand that people die even now.”

The protest at CSUN was similar to many that have occurred in other cities around Southern California, including Malibu and Santa Monica.

Zhytelna told the attendants that she regularly gets notifications about her country through her phone. She explained that the Ukrainian government is constantly sending out emergency alerts on the status of major cities like Kyiv and Kharkiv, her hometown.

“Kharkiv, it’s in the east of Ukraine near the Russian borders,” Zhytelna said. “It’s just suffering more than other cities because [the Russian military] bombs the city every day, every hour. They just keep doing it.”

Among the participants at Wednesday’s protest were Zhytelna’s tennis coach, Gary Victor, and many of her teammates.

One of those teammates was Ekaterina “Kat” Repina, her tennis doubles partner. Repina is an international student from Russia. She and Zhytelna have found comfort in each other, with both of their families and mother countries caught in the war.

“Honestly it’s really hard to find any words right now,” Repina said. “The only thing I can do is support my friend and spread awareness to show people that, no matter the country, we’re still human and we should still be there for each other … especially as [someone] from [Russia]. I just hope that everything is going to end soon and that no one will suffer anymore.”

The feelings expressed by Repina are similar to those shown by many young Russians, who don’t harbor the same residual feelings from the Cold War as older generations, and are largely in opposition to Russia’s invasion of Ukraine.

Though many of the protest’s attendees had a personal relationship to Zhytelna, many had no idea who she was before that day. Among the crowd of over 50 people were Adam Castle and Jane Partizpanyan, both CSUN students who are majoring in journalism with an emphasis in public relations.

Castle and Partizpanyan were two of many participants who came to create posters to show solidarity with Zhytelna and the country of Ukraine.

The protest also attracted people as it went on. Max McDermott, a junior at CSUN majoring in liberal studies, was on the way to class before seeing the protest and stopping by to show support.

“I’m actually trying to do a demonstration as well,” McDermott said. “I brought it up to the Matador Involvement Center.”

Later in the day, Mariia Nikitash, a Ukrainian student from Cal State Fullerton and friend of Zhytelna, came to participate in the protest. Nikitash brought along her Ukrainian friend, Polina Tatarchenko, and together they shared how the Russian invasion has affected them and their loved ones.

Nikitash, also a college tennis player, said that she first heard war had erupted while her team was traveling to play against Hawaii Pacific University in Honolulu, Hawaii. Nikitash recalled getting a text from her mom, who lives in a village one hour away from Kyiv.

“I was shocked,” Nikitash said. “It was so hard because my family was far away. I was just so scared to play. It’s hard to think something like this can happen in the 21st century.”

Tatarchenko has lived in three Ukrainian cities throughout her life, including Kharkiv. She shared how the war had begun to affect her.

“Today I’m seeing the news and seeing all of the places that I have memories with are destroyed,” Tatarchenko said.

She gets regular updates from her mother, who lets her know which areas have been affected by the Russian military. Many of these areas are places that Tatarchenko and her family have fond memories of.

“There was one really special place at Kharkiv, and it was bombed yesterday,” Tatarchennko said. “Totally [destroyed]. It was the place where my parents first met, and the fact that so many places are destroyed and so many places I had memories with are just gone, and I can’t come back and remember them is just the worst thing.”

Nikitash and Tatarchenko also pointed out the anxiety that comes with not getting regular updates from their loved ones, and the uncertainty that follows. They both have family members and friends who are still in Ukraine enduring the war.

“I’m texting my grandma and saying, ‘How are you? Is everything okay? Are you still alive?’” Tatarchenko said. “And when she’s not answering for like five hours, you’re like, ‘Oh god, oh god, where should I call?’”

Nikitash and Tatarchenko also pointed out how, even among the people who do send them regular updates, the news is not always reassuring.

“We have another friend. She was my neighbor,” Tatarchenko said. “We were like three best friends and classmates. She’s now in a bomb shelter hiding right now, which we’re really scared for [her]. She’s really close to us.”

“We never talk [about serious topics] because we’re best friends, right?” Tatarchenko said. “[But] when she’s saying, ‘Oh my God, my hands are shaking.’ It’s just terrifying [because] I just really love her. We love her. And it’s just very hard. I’m shaking right now because it’s hard honestly but I really hope everything can end soon.”

This was not the first time that Zhytelna has spoken publicly about the war in Ukraine. However, as the vigil came to a close, she acknowledged how emotional she was to see the overwhelming support she and the people of Ukraine were receiving from the CSUN community.

“I was just crying because there’s so many people [who] came,” Zhytelna said. “I thought, ‘Wow, it’s insane [to] me, that so many people care about this.’”