It’s not only about who oversees the overseers, it’s about how we decide to care for each other. 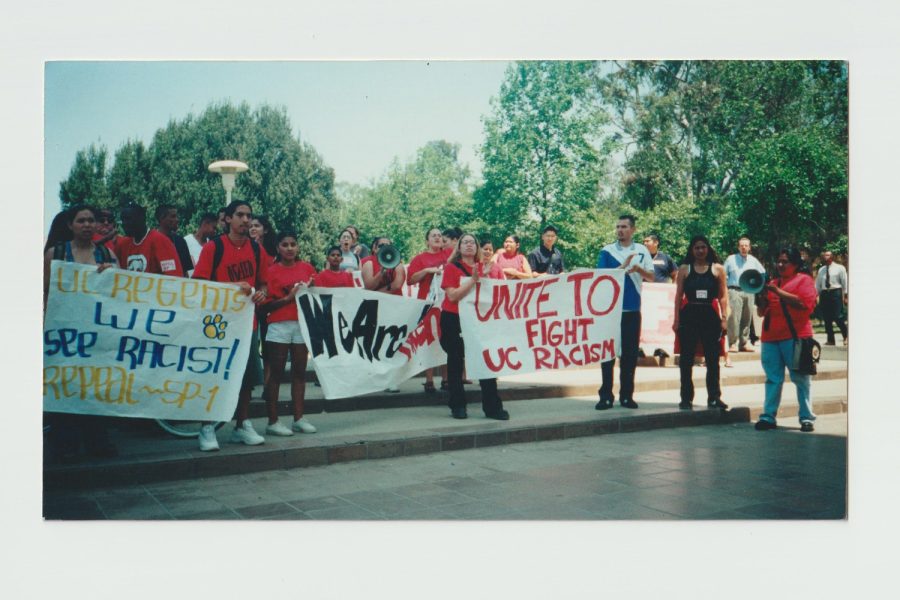 Photo taken on March 15, 2001, at a protest for the fight against racism in UC schools at UCLA.

Martha D. Escobar is a professor in the department of Chicana and Chicano studies and serves as the executive director for Project Rebound at CSUN, which is a resource for formerly incarcerated students. She is the author of Captivity Beyond Prisons: Criminalization Experiences of Latina (Im)migrants.

The recent news of California State University Chancellor Joseph I. Castro’s handling of allegations of sexual harassment by Frank Lamas, former Fresno State vice president of student affairs, makes me angry but I am not surprised. Castro resigned within two weeks of the report being made public by the USA Today investigation. According to recent news stories, Castro was made aware of allegations against his VP and despite this, agreed to sign a settlement with Lamas. The settlement included cutting a check in the amount of $260,000 and a stellar letter of recommendation. Repeatedly, our communities witness and learn about innumerable cases and there is no meaningful mechanism or procedure to address, much less prevent this form of institutional violence at the university. As painful as this is, I think it is necessary to publicly acknowledge the pain that our university community has witnessed in order to model some type of transformative justice, which is the spirit from which I write this op-ed.

When I was an undergraduate student at the University of California, Riverside, a collective of us experienced racialized and gendered violence by male peers who were enrolled at my campus. As a student activist, I organized against racism within our campus newspaper and sexual violence experienced by women of color. A male fraternity decided to target the group of organizers, most of whom were young females of color. On two occasions they followed and attempted to rear-end some of the organizers, including my sister. I parked my car overnight near the UCR campus and it was flipped over on its side. Late in the evening while some friends and I were home, an anonymous man slammed against one of our walls causing us to react by falling in fear to the ground. After crawling on the floor to the window, we saw him run to the street and drive off in a white truck.

The violence continued. Used condoms were left at my door, which signaled to me a threat of rape. After weeks of harassment, I built the courage to seek protection by university leadership. James Sandoval, UCR’s vice chancellor for student affairs, met with me in his office. I was so angry, I handed him one of the used condoms left at my house. If I had to deal with it, the institution needed to have to bear witness to my pain. He gave me some lame excuse that because these incidents happened off campus, he possessed no power to take action. In October of 2018, news coverage broke on a 298-page report of allegations of sexual harassment by Sandoval, the same man who was charged with the administration of student affairs. The report addressed 20 years of alleged sexual harassment by Sandoval against female employees, a time that coincides with when I met with him and explained my own ordeal with gendered violence.

In my position as a professor, I now come to this situation with both an experiential and intellectual position on the matter of institutionalized violence against women. Nothing about the Lamas case is new, but it is important for us to reflect as a community that institutions of higher education still enable gendered forms of violence in the most insidious ways. As a society, we have constructed gender dichotomies and assigned different meaning and value to bodies and things gendered as female and male. That which is constructed as female is understood as weaker, dependent, emotional/irrational, and that which is constructed as male is understood as stronger, independent, and logical/rational. These differently valued dichotomies shape our relationship to these institutions and make some bodies more precarious and vulnerable to violence.

During the COVID-19 pandemic, I joined a collective of caregivers and we organized for better working conditions to address the fact that we were not all experiencing the pandemic in the same ways. For caregivers, our work collided with our home lives. We had to meet the needs of our students, those that we care for, and had to pivot teaching modalities on several occasions. For those of us that come from working class families, we also had the added struggles of contributing to ensure the survival of our extended families and loved ones. The caregiver collective organized and voiced these struggles in meetings, events, letters, statements, and were even successful at passing a resolution in the faculty senate in solidarity with caregivers. However, the main response from institutional leadership was that there was not much they could do. We were told that it is a matter to be addressed by the chancellor’s office. That it is a matter to be addressed through the collective bargaining agreement. These interactions with the institution took me back 20 years ago to the time I sat in Sandoval’s office and was told that there was nothing the institution could do to protect us. Because caregiving is gendered as female, this labor is constructed as less worthy and those of us that embody caregiving in its many forms are made more vulnerable and violable.

So why do we continue to seek protection within institutions that often do not seem to care about us? In these discouraging moments, I am reminded of those that cared for me 20 years ago. Professors who showed up to make sure we were safe when we felt threatened in our home; staff who accompanied me to seek protection in Sandoval’s office and held space for me to cry from frustration after that meeting; peers who fought alongside me to end racism and gendered violence at UCR, and countless others. I am also grateful for the people who have cared for and sustained me at CSUN over the last 10 years, including the caregiving collective. Institutions are made up of people, and people are not good or bad. We are complicated and messy and always have the potential to act in ways that are intentionally or unintentionally harmful, or in ways that are healing and grounded in justice. Regardless of Castro’s resignation, we must remind ourselves that Lamas and Castro did not act alone. There was a collective of people involved, including lawyers, other system and university leaders, and then-Chancellor Timothy White. These forms of violence are possible because there is a consensus that that which is gendered as female is violable. Meaningful change will only happen when we collectively decide to value and care for one another, and drawing from Black feminist theorists, especially those at the margins of the margins.